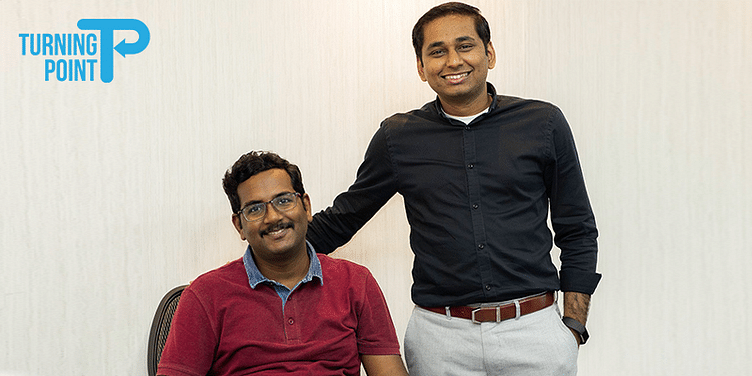 The Turning Point is a series of short articles that focuses on the moment when an entrepreneur hit upon their winning idea. Today, we look at healthtech startup DocsApp, which recently merged with MediBuddy, and aims to make quality healthcare accessible and affordable across India.

Satish Kannan and Enbasekar D were friends during their days at IIT-Madras. Both had an interest in healthcare since the very beginning.

After college, Satish started his career with Philips Healthcare, doing R&D on specialised equipment used by cardiologists for conducting surgeries. Meanwhile, Enbasekar went on to work on R&D of healthcare medical devices and developing technologies for uninterrupted power supply to consumers in rural regions.

Woking on these health-related companies made them go deeper into the sector. The duo realised that access to a specialist doctor was a huge challenge in India and mobile technologies could help make healthcare services more accessible to people. That was the genesis of DocsApp, which was launched in 2015.

Based in Bengaluru, the startup began life as an online doctor consultation platform.

“The aim has always been to make healthcare accessible to all Indians. Initially, the idea was to build hospitals across the nation, but that was not possible. The fact that we have a shortage of specialist doctors in the country, with more than 90 percent of specialists practising in metropolitan cities, makes quality healthcare inaccessible to millions of Indians. Tackling this issue on a massive scale would have been impossible, if not for technology,” Satish says.

WATCH: How healthtech startup DocsApp plans to reach 1 lakh people in the remotest parts of India every day

When the duo began working on the concept in 2015, they realised that almost 70 percent of health issues can be diagnosed and treated online. They leveraged this opportunity to develop DocsApp.

DocsApp’s journey started from the IIT-M Incubation centre where it also raised its initial funding of Rs 5 lakh.

Talking about initial challenges, Satish says, “It is a human tendency in patients to seek medical advice face to face with the doctor and derive satisfaction. Questions like ‘can an online doctor consultation deliver that kind of satisfaction, is it safe, how trustworthy is it?’ were the biggest challenges that we faced.”

The joint entity, MediBuddy-DocsApp, is now a 24x7 digital healthcare platform that connects patients to specialist doctors through call and video. The mobile and web-based platform offers doctor consultations on the go. It also allows users to buy medicines and book lab tests from the comfort of their homes.

The joint entity also raised a $20 million (Rs 150 crore) in a Series B round of funding led by Bessemer Venture Partners, Fusian Capital, Mitsui Sumitomo, and Beyond Next Ventures. Existing investors, including Milliways Ventures and Rebright Partners, also participated in this round.

Today, MediBuddy-DocsApp claims to be servicing the healthcare needs of over three crore Indians. It claims to serve the needs of over 25,000 Indians daily with a partner network of over 90,000 doctors, 7,000 hospitals, 3,000 diagnostic centres, and 2,500 pharmacies covering over 95 percent of all pin codes in India. It is also the healthcare partner for top corporates across sectors like IT, real estate, MNCs, and banks.

Satish, CEO of MediBuddy-DocsApp, says: “Our long-term vision is to be able to serve a billion Indians and ensure that high-quality healthcare is both accessible and affordable. Keeping this in mind, we will further strengthen our doctor base and patient reach, and develop our product to move a step closer to our mission of providing high-quality healthcare to billions of Indians.”