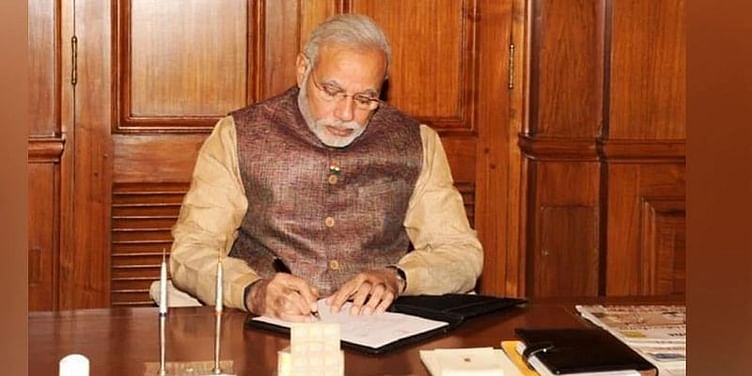 Prime Minister Narendra Modi began his monthly broadcast by talking about storytelling, saying it has been a part of our nation for centuries, and went on to laud farmers for playing a major role in efforts to build a self-reliant India.

Lauding farmers for strengthening the country's agriculture sector, Prime Minister Narendra Modi on Sunday said the farm sector was playing a major role in efforts to build a self-reliant India.

He also said if the essence of Mahatma Gandhi's economic philosophy was followed, there would not have been any need for the 'Aatmanirbhar Bharat' campaign as India would have become self-reliant much earlier.

Speaking on various issues during his monthly 'Mann Ki Baat' broadcast, Modi said many farmers benefited after fruits and vegetables were brought out of APMC Act in some states a few years ago.

Our agriculture sector has shown its prowess during the COVID-19 pandemic and farmers are playing a major role in efforts to build a self-reliant India, he said.

Talking about various success stories of farmer groups across states, Modi also said the agriculture sector would benefit immensely with greater use of technology in farming.

The prime minister began his monthly broadcast by talking about storytelling, saying it has been a part of our nation for centuries.

"Storytelling is as old as civilisation...these days, stories relating to science are gaining popularity," Modi said.

He said many people were making storytelling popular across the country and underlined that India had a glorious tradition of storytelling. He interacted with members of the Bangalore Storytelling Society, and requested all families to set aside some time for storytelling.

In another development, this month Prime Minister Narendra Modi asserted that the farm sector reform bills passed by Parliament were the need of 21st Century India, and again reassured farmers that the government purchase of their produce coupled with Minimum Support Price mechanism would continue.

Noting that his government had brought farm ordinances in June, which these legislations would replace, he said farmers were already getting a better price for their produce in several states.

Farmers will now have the freedom to sell their produce at a place and price of their choice, he said.