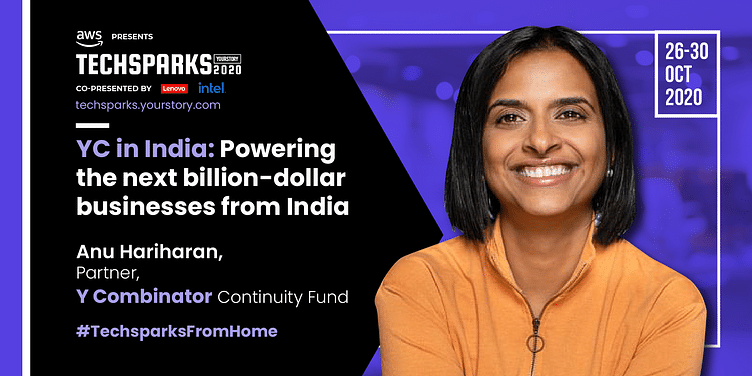 Anu Hariharan, a partner at Y Combinator’s Continuity Fund, has a keen eye for growth-stage startups from India. In this fireside chat with YourStory’s Shradha Sharma at TechSparks 2020, she shares insights on powering the next billion-dollar businesses from India.

Anu Hariharan’s fireside chat with Shradha Sharma at TechSparks is just shy of 49 minutes. And as I sit to transcribe it, I can’t help but wonder at the amount of insight and perspective she has managed to pack into the conversation.

Firstly, Anu is a big deal. She is a Partner with the YC Continuity Fund, and has led YC Continuity's investments in Brex, ﻿Gusto﻿, Instacart, Convoy, and Boom. Anu also sits on the boards of Convoy, Brex, and others, and has worked closely with two recent Indian unicorn - ﻿Razorpay﻿ and soonicorn, ﻿Meesho﻿.

Anu has the unique status of being Continuity’s first female investing partner in an overall YC group. Her appointment, added up with founding partner Jessica Livingston and four other female partners involved in the investing process at YC, scores big time for diversity and hints that the old boys' club in venture capital is beginning to shift.

Of Indian origin, Anu hails from Coimbatore, has an undergraduate degree from NITK Surathkal, holds a MS in electrical engineering from Virginia Tech, and an MBA from The Wharton School. Her unique perspective that strides both Orient and Occident has stood in good stead - particularly in her work with startups such as Meesho.

In a conversation brimming with insights and rich perspectives - particularly on building from India for the world, Anu talks tech, scale, entrepreneurship, building billion-dollar businesses, and more. Here are a few excerpts.

Anu spoke about the importance of entrepreneurs getting their first phase, or what YC refers to as the ‘zero to one phase’, right. “It’s really about focusing on what is it that you're building: What is your product? What is your unique insight? Do you have at least a 100 users who love you versus a million users who merely like you?” she says.

“What stood out about the Razorpay founders was they were willing to iterate, move really fast, and learn from their mistakes. Try to figure out if there are 100 of 200 customers who love you versus a million that only like you,” she adds.

Anu also spoke about the key trends that pointed to India’s startup ecosystem acceleration and its potential to truly take centre stage in the coming decade.

“Over the next 10 years, India's GDP acceleration will help improve consumer willingness to pay, which in turn helps these companies flourish,” she adds.

India is poised to lead the global developer population

The global developer population is around 26 million, with the US taking the lead, and Anu believes that will change very soon to India's advantage.

“By 2024, India is expected to surpass the US and be the number one. I think that's crucial, because if you believe that startups are the foundation and engine for future growth, India is going to be the most important country with developers to support that growth,” she says.

“I think the startup ecosystem in India is really young, but has gone through some significant inflection points. Architecture and ability is way better than it was 10 years ago. I'd say it's on par with US startups, and I think this will really help fuel the engine for Indian startups over the next decade,” she adds.

Of the 30,000 applications YC receives every year, India is the second largest applicant pool outside the US. In fact, 27 percent of the 2,500 funded startups are headquartered outside the US, with India holding the largest number in that pool. “We have 200 founders who are part of our founder pool from India, who are part of the global YC founder community. And we've added 90 of them in the last one year alone. So that’s quite significant,” Anu says.

“Ten years from now, I believe that Silicon Valley, Beijing, and Bangalore will become the most important components of the (global) tech ecosystem,” she adds.

"Of the 30,000 applications YC receives every year, India is the second-largest applicant pool outside the US." - Anu Hariharan (@anuhariharan), Partner, Y Combinator's Continuity Fund (@ycombinator).

India’s engineering quality is as good as the US

With India being the second largest market for YC outside the US – both in terms of applications and number of companies they've funded, YC is keen on doubling down on their alumni efforts.

Many startups that YC had funded around five years ago in India are the ones that are now breaking out and scaling, serving as an inspiration for a lot more younger founders. YC plans on appealing to potential entrepreneurs by going to the universities in India.

“We started with the IITs. We went to the engineering departments and hosted a virtual session to talk about startup entrepreneurship. And we did this with our Indian alums. Harshil and Shashank from Razorpay did it at IIT-Roorkee. Lalit did it at IIT-Bombay Vidit is going to do it at IIT-Delhi,” she says.

“The number one thing I hear from the YC Indian founders, when they meet these other US founders or scale startups, is the realisation that India’s engineering quality is as good as theirs. It amazes us that to this day, the number of graduates from engineering colleges looking to start up or join a startup is a really tiny percentage,” she adds.

Clarity of thought is more important than performance

Entrepreneurship is like getting punched in the face every day

“My partner, Michael Siebel, often says that being a founder is like getting punched in the face every day,” says Anu, as she contextualised how tough an entrepreneurial journey could be and the importance of confidence, grit, and ambition.

"Entrepreneurship is like getting punched in the face every day" - Anu Hariharan (@anuhariharan), Partner, Y Combinator's Continuity Fund (@ycombinator).

“In India, you face a ton of competition anyway – even to get where you are – you've likely faced more challenges than most people. So, the ability to pick up and keep going is really, really important," she says.

"I'd like to see more confidence, grit, and ambition. I’d like to see founders being vocal about that ambition, because that truly inspires more people,” she says.