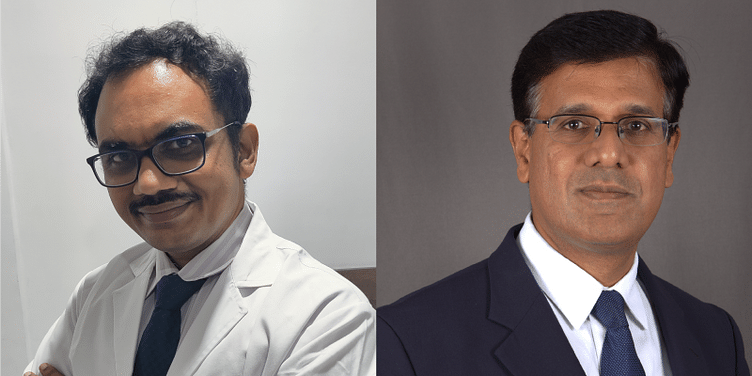 A study conducted by the World Health Organisation (WHO) estimated that 5.2 million children under five years of age died mostly from preventable and treatable causes in 2019. This staggering number can be brought down if advanced technology meets medicine to develop an early warning system.

This is the path taken by ﻿CognitiveCare﻿, a healthtech startup founded by Venkata Narasimham Peri and Dr Suresh Attili and based out of Hyderabad and California, US.

Venkata Narasimham Peri, popularly known as PV, was a technology business consultant for more than two decades, having worked with PwC and other organisations. He decided to become an entrepreneur at the age of 48 when he realised artificial intelligence (AI) could become a valuable tool for the healthcare industry.

PV partnered with Dr Suresh Attili, a leading oncologist and scientist, to start CognitiveCare in 2018. The duo toyed with various segments like mental health and cancer, but decided to focus on maternal and infant healthcare, given the enormity of the problem.

“Nobody in the world was putting AI into it (maternal healthcare); it was not an area that was explored,” PV says.

He adds that the world loses 800 women to pregnancy-related complications every day and millions go through very complex pregnancies.

Both the founders bootstrapped CognitiveCare with an investment of $300,000 and decided to build an AI technology platform that could provide all relevant health indicators of an expectant mother to her doctor.

This AI platform, Maternal Infant Health Insights and Cognitive Intelligence (MIHIC), is a neural network that analyses all data of an expectant mother and come out with a score.

“We have trained our model to analyse all kinds of data to deliver with accurate health status of a pregnant woman,” says PV, adding that the model is more than 90 percent accurate.

The development of such an open-sourced AI computing model also required an interdisciplinary approach as it was not just about medicine or computing algorithms. It also delved into other subjects such as mathematics, statistics, genetics, and even sociology.

The CognitiveCare team is inter-disciplinary and includes research scientists with a mathematics background and others with a focus on molecular genetics and software codes.

“We take all relevant aspects of an expectant woman’s data - from health indicators and economic status to lifestyle and social determinants,” PV says.

In short, MIHIC provides scores on all 48 indicators.  For example, PV says, their studies have shown that women who stay near the sea have a higher probability of developing folic acid deficiency.

“The score we provide allows for early-risk detection so doctors can take preventive action,” PV says. He clarifies that the job of CognitiveCare is to only provide indicators; the decision on the treatments is the doctor’s alone.

CognitiveCare has taken all mandatory approvals and is HIPAA-compliant; it meets the highest standards in terms of maintaining privacy of the patient’s identity and data.

The healthtech startup has been in stealth mode till now and its technology platform has evinced interest from leading medical schools and institutions in United States and India. For example, Brigham and Women’s Hospital in Boston, Massachusetts, is directing the research study to test MIHIC.

How the platform helps

PV believes the application and benefits of their technology platform are not restricted to just hospitals as others like the government, pharmaceutical companies, and even health insurance firms stand to gain.

Governments across the world spend significant amounts of money on healthcare, and a platform like MIHIC can help them take preventive action and avoid expensive medical interventions later.

It can also accelerate the drug discovery process for pharmaceutical companies with better insights on maternal and infant care. Insurance companies can assess risks more accurately by using this platform.

CognitiveCare will primarily look at markets in the US, the UK, and India.

PV says many medical institutes are willing to share data, and feels the healthtech startup has no direct competition as it provides a 360-degree view of women’s maternal health.

“We have the ability to detect and quantify the risk,” he says.

The founder says CognitiveCare's focus for the next three to four years would be maternal and infant healthcare. The startup, which has already $900,000 in a seed round with a pre-money valuation of $8 million, says they will later explore other areas of health.

“We not only want to empower the doctor, but our eventual goal is that every woman - not just an expectant mother - can gauge her obstetric health," PV says.