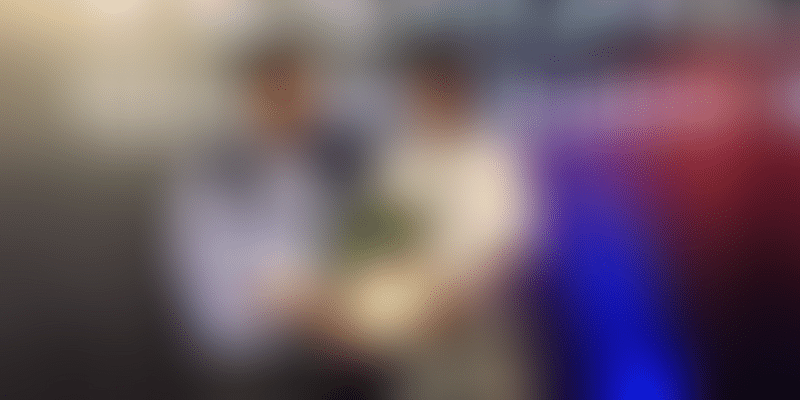 In most conference room meetings at offices, people tend to yawn, drink water, or take breaks after twenty to twenty-five minutes. This is not because they are bored with the meeting, but it is due to high carbon dioxide levels in the room that exceeds safe limits, which creates discomfort.

As the world battles air pollution, there is a lot of focus on smoke emissions and dust particles, but there is much more happening at homes and offices in terms of invisible impurities or indoor pollution.

Ubreathe, a Gurugram-based tech startup founded in 2018 by Sanjay Maurya and Akshay Goyal, is on a mission to regenerate pure air in living spaces through its patented ‘smart pot’ plants. The startup is combining air-purifying plants with technology to amplify the output of purified air.

“We are a product innovation company with a focus on urban city problems. We felt that air pollution has been ignored for a long time and there is a nice opportunity to innovate as well as set a benchmark in terms of a sustainable business,” says Sanjay, an IIT Kanpur graduate.

According to Sanjay, indoor air pollution is not just about vehicular or factory emissions, but there are other types. It comes in three main categories - particulate contaminants; gaseous contaminants from wall paints, furniture, kitchens; and lastly biological contaminants from fungus due to poor ventilation.

While there are a lot of mechanical filtration systems available in the market today, Sanjay says, these are not sustainable solutions as they do not have the desired impact.

Studies have shown that there are certain plant species, which can absorb these harmful pollutants and emit fresh air.

Ubreathe has developed an in-house technology, which consists of a “smart pot” with a plant. This pot, which has to be charged with electricity, creates a vacuum in the root area to absorb all the pollutants and release air without impurities.

Sanjay says, “All the air purification happens through the roots. In many cases, there is a passive purification, but through our technology we are able to magnify it.”

He claims the smart pot can magnify the purification process by almost 50 times. This is a combination of the plant and its technology.

According to the startup, its smart pot captures a wide spectrum of air pollution and there is no need to change the filters, which makes it more sustainable.

Ubreathe came out with its first product for the retail consumer market in 2019 and was priced at Rs 5,000. It was sold to around 500 customers in the Delhi-NCR region. While interacting with customers during the time, the founders got a greater understanding about indoor air pollution and the startup came up with a different approach to target enterprise customers or offices.

“We have a corporate solutions arm, which addresses their requirement as their challenges are quite different from households,” says Sanjay.

From being passionate about the environment to starting a successful organic brand: a homemaker’s journey

The startup first understands the air pollution levels at a workplace and what the requirements are. For example, at a workplace where one cannot place more air purification plants, Ubreathe’s technology, which amplifies the process, can have the same result with lesser number of pots.

Today, Ubreathe provides its corporate solutions to around 10 customers based out of Delhi and Bengaluru.

Sanjay believes the impact of their products is manifold as it is not just about clean air indoors, but it also has a positive psychological effect.

“These create a very conducive environment and the idea is to bring back nature to urban life,” says Sanjay.

Given the foundation that Ubreathe has laid out over the last two years, the startup is now ready to expand. On the retail consumer side, it plans to roll out newly-developed products that are in the pipeline this year, which will also give it a reach to expand into newer cities.

The startup is also looking at expanding its base on the corporate side by engaging with more number of offices.

Both these initiatives will mean that Ubreathe will have numerous partnerships with various kinds of organisation to increase its market penetration.

As of now, Ubreathe competes with the likes of Blue Air and Dyson. However, Sanjay believes they are ready to meet that challenge from established companies.

The bootstrapped startup currently has about nine members in its team and said it has no immediate plans to raise any external funding. The startup said it will look into it when it goes for a larger retail expansion.

“The proudest thing for us is that it is entirely in-house technology. Ours is a ‘Made in India’ product,” says Sanjay.