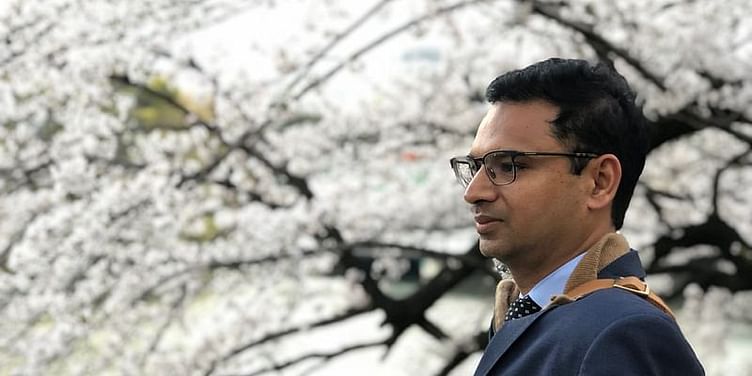 Growing up in Dehradun, Eltropy Co-founder, Ashish Garg, dreamt of going to the US, working with computers and having his own startup; all of which he realised. This is his story.

Ashish Garg grew up in the small town of Dehradun, in a middle class household, where his father was a bank clerk, and mother, a homemaker. Ashish’s parents wanted the best for their children, sending him and his sister to a private school in the city, Cambrian Hall. A bright student, Ashish was on top of his class throughout high school, graduating as the district topper.

“I always wanted to be a computer engineer and start my own company. I knew it from childhood, as early as ninth grade,”

he tells ﻿YourStory Media﻿over a ﻿Zoom﻿call, from his residence on a hilltop in San Jose, California, where he has his own tech startup called Eltropy today.

His love for computers started around the same time (Class 9), when his father gifted him his first computer, a ‘Pentium x486’.

Outside his day job at the bank, Ashish’s father tried his hand at several businesses (five to be precise) on the side, none of which really worked out. Until one day, his sixth venture, a real estate business took off, around the turn of the millennium, when Dehradun became the capital of the newly formed state of Uttarakhand. The significant milestone coincided with the time when Ashish was about to graduate from the prestigious BITS, Pilani, with a degree in Electronics and Instrumentation Engineering. This watershed moment reinforced Ashish’s belief in the spirit of entrepreneurship and perseverance. “23 years he stuck to it. Perseverance was the biggest lesson I learnt from seeing that,” Ashish says.

“In ’97 when I joined BITS, Hotmail came out of nowhere. Within 18 months it got sold to ﻿Microsoft﻿for $500 million. Sabeer Bhaita was a BITS alum. He founded the company in ’96 and by December ’97 it’s sold off. If he can do it, why can’t I?,” Ashish remembers telling himself back then.

But he knew that he’d have to start earning first, before taking the entrepreneurial plunge. In his fourth year at BITS, he took the CAT (Common Admission Test) and got interview calls from all the IIMs, securing admission at six of them. Some of his classmates started preparing for GRE (Graduate Record Examinations), a standardised test for admission to most graduate schools in the US. Ashish decided to give it a go.

“I was always fascinated with America, because it was looked at as the land of computers. Growing up, I had always wanted to go there, live there,” he says.

Letting go of the IIMs, Ashish landed up at the University of California (UC), Santa Barbara for an MS in Electrical Engineering. He finished his two-year course in 12 months, but getting a job at that time proved to be difficult, as the dot com bust had happened.

Hustling and not giving up were two things he had picked up from his dad early on. He was not ready to give up on his American dream yet.

So he decided to come down to San Jose, where three of his BITS classmates were in graduate programmes at the hallowed Stanford University. He struck a deal with his former classmates. “I will be a house help for you, cook and clean for you, just let me stay rent-free. Just let me be here, to be close to Stanford, where there could be recruitment opportunities,” he told them.

But how would a non-Stanford alum attract recruiters who were eyeing talent from there? That’s where the big American hustle came in.

He asked his friends to pass on business cards of recruiters on campus, who they were not interested in. The idea was that he would get in touch and convince those recruiters to hire him.

Fortune favours the brave, as the adage goes, and a cold email to a semiconductor company did the trick.

Although his heart was in software, he got into hardware and started his career in customer support, answering tech questions. He worked there for a decade so that he could get his green card, which states permanent residency in the US. While there, he rose in the ranks and the company even sponsored an executive MBA for him at the reputed Wharton School of the University of Pennsylvania.

“As soon as I finished my MBA, I got my green card. I quit my job and took up the riskiest option. I had three options-- become a CXO at the company, get another job as a Wharton alum, or start up.”

His wife who was an Engineering Manager at ﻿SAP﻿, encouraged him to finally pursue his long cherished dream of entrepreneurship, taking on the financial responsibilities of the house herself.

And thus, he co-founded Eltropy with Chandra Bhople, a BITS super-senior (23 years to be exact) in 2013. Eltropy is a global software-as-a-service (SaaS) startup that enables businesses to connect with their customers on SMS (short messaging service) and text messaging apps, such as ﻿WhatsApp﻿, iMessage, WeChat, Line, ﻿Facebook﻿Messenger, KakaoTalk, Telegram, and Viber. Within 18 months of launch, the startup landed a million-dollar deal; in two years its annual recurring revenue (ARR) stood at $1.2 million.

Eltropy enables financial institutions such as banks and insurance companies to communicate with their clients over text messaging in a secure and TCPA (Telephone Consumer Protection Act)-compliant way. Using the startup’s SaaS platform, various verticals within financial institutions such as lending, collections, sales, marketing, service, risk management, and internal communications are able to leverage text messaging to boost member engagement and enhance experience. Eltropy also integrates with credit union software and technology solutions such as Symitar and Corelation, and uses analytics to provide engagement insights.

“The problem with using personal Whatsapp or other messengers is that sensitive and private data is not safe there. We give the banks an app that goes through a web browser, the employee can never copy or share any of the data that’s being received from customers, there are privacy layers.”

To be sure, there is Whatsapp Business, but in the US, SMS is the more popular and the preferred mode of texting. Other competitors include the likes of Zipwhip and Shastic.

“The difference is that we are solving for financial services, which have unique requirements in terms of data privacy, regulation, and security,” says Ashish.

The 47-member Eltropy team services 158 clients, of which 150 are credit unions in the US, while the rest are banks and insurance companies in the other parts of the world. A credit union is typically a not-for-profit, member-owned financial institution, which provides traditional banking services, similar to a commercial bank.

The startup closed the previous calendar year at $5 million ARR, and is on track to triple it to around $15 million by December this year, according to Ashish. It broke even in 2018 and has stayed profitable since. In 2015, it raised $1 million in angel funding from BITS Sparks Angel Network, the highest so far from the alumni-backed network. As many as 25 BITS alumni participated in the round. Currently, Eltropy is actively talking to a number American funds to raise a Series A in the range of $15-18 million.