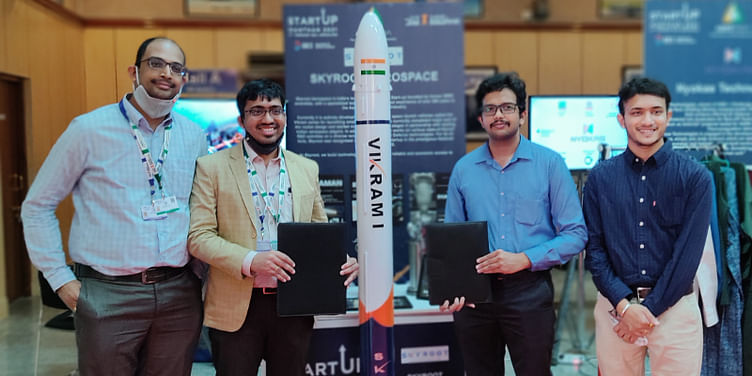 As a part of the deal, Bellatrix will build an Orbital Transfer Vehicle to be used in the upper stage of Skyroot’s Vikram launch vehicles.

The Indian spacetech ecosystem is now utilising collaborations to propel its growth. Spacetech startups Bellatrix Aerospace and Skyroot Aerospace on Monday announced they have now entered into a Memorandum of Understanding (MoU) to further India’s spacetech efforts.

As a part of the deal, the Orbital Transfer Vehicle (OTV) being developed by Bellatrix will be used in the upper stage of Vikram launch vehicles built by Skyroot.

“We are confident that this partnership will help us serve complex mission requirements and at the same time reduce the cost of access to space. The increasing demand for timely satellite constellation deployment in different orbits and on rideshare missions has not only made Orbital Transfer Vehicles (OTV) attractive but also necessary,” said Rohan Muralidhar, CEO of Bellatrix Aerospace.

We are delighted to announce our partnership with @BellatrixAero, to use their Orbital Transfer Vehicle with our Vikram series of Space Launch Vehicles.

Healthy collaboration among our own startups can offer competitive solutions from India for the world.#AeroIndia2021 pic.twitter.com/JTvzcl4HEr

An OTV is a spacecraft that can deploy the payload in precise orbits enabling a launch vehicle to deliver satellites to more orbits than what was conventionally possible.

“In simple terms, it is like a taxi in space to take satellites to their operational orbits. Skyroot and Bellatrix plan to have the first mission of a Vikram launcher with an Orbital Transfer Vehicle by 2023,” the companies said in an official statement.

Founded in 2015, Bengaluru-based Bellatrix is an IP-driven spacetech company providing full-suite solution for spacecraft propulsion systems. It is now expanding business for developing Orbital Transfer Vehicles based on its advanced propulsion technologies for precise orbital insertion of satellites.

With this deal, Bellatrix enters into its third partnership. Prior to this, it signed MoUs with SatSure for their constellation of EO satellites, which has complex mission requirements, and with Dhruva Space for space qualification of one of its propulsion systems.

Speaking about the partnerships between spacetech players, Pawan Kumar Chandana, CEO & Co-founder of Skyroot, said, the collaboration among the startups can offer very competitive solutions from India for the world.

Both Bellatrix and Skyroot bagged the National Startup Award under launch vehicles and satellite categories this year.

With ISRO and the government announcing new spacetech reforms for supporting the private spacetech ecosystem in India, several players are leveraging the opportunity to strengthen the sector.