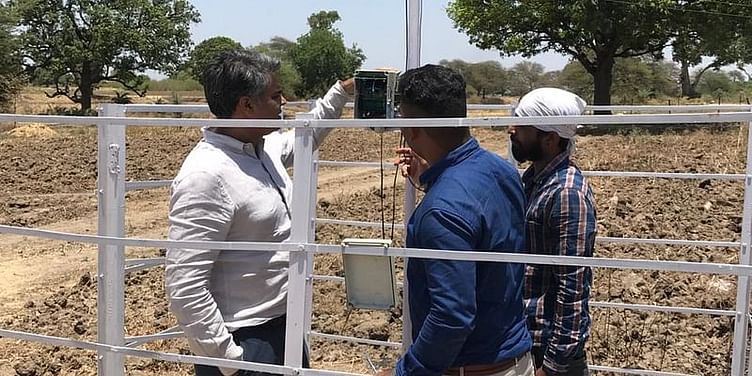 Between 2017 and 2019, India lost crops grown on nearly 8.5 percent (or 18.16 million hectares) of its total arable land due to floods and excessive rains, according to data shared by the government in the Lok Sabha in February. This resulted in monetary losses to the tune of hundreds of crores of rupees for farmers.

Crop loss, and, by extension, financial loss, is the leading cause of farmer suicides in India.

And, with the world hurtling towards climate change, crop losses are only going to keep getting worse. In fact, environmental scientists have predicted that climate change can lead to a 1.5 percent decline in India’s GDP in the next nearly 10 years — and the farmer community will be the worst hit of all.

Facts like these troubled Jatin Singh, a resident of Delhi who comes from a long line of problem-solvers, aka entrepreneurs. Entering the business world at 25, Jatin founded his first company, Skymet, an agricultural weather risk manager and data company, which became the stepping stone to his next venture when he realised, upon analysing heaps of data, how weather and climate affected Indian agriculture.

When he learnt how little one could control forces of nature such as floods, excessive or very little rainfall, and rising temperatures, Jatin decided to focus his attention on the people that crop losses affected the most — farmers.

With the goal of increasing the penetration of formal financial products and services, and helping farmers cushion themselves against sudden financial losses, he founded GramCover, an agricultural insurance startup.

In partnership with insurers such as ﻿Bajaj Allianz General Insurance﻿, Royal Sundaram, LIC, ﻿ICICI Lombard﻿, GIC Re, ﻿HDFC ERGO﻿, ﻿Aviva Ventures﻿and a host of others, GramCover provides insurance products for crops, livestock, health, motor, and life, among others, for as little as Rs 35.

These insurance products cover financial loss-causing events such as death of livestock; crop damage due to landslides, weather, droughts, fires, and floods; loss or theft of two-wheelers; and general life and health.

“Our mission statement is gai (cow) se gaadi (car) tak, and we want to become the centre of all risk and insurance in rural India,” Jatin, the startup’s Co-founder tells ﻿YourStory Media﻿.

The startup, which works in 28 districts and 3,000-plus villages, was founded in 2016 by Jatin and Dhyanesh Bhatt, a dairy technologist and management-degree holder in agribusiness.

GramCover works like any other insurance company — its agents educate residents in rural areas about the products it sells, and then signs up those interested in purchasing insurance.

What helps GramCover’s acceptability in rural areas is the startup’s understanding of the biological processes of production, how geography affects production, and the way it underwrites those insurances after making its assessments.

“Difficulties in crop underwriting mainly arise because of the nature of the risk, asymmetries of information in underwriting, the geographical dispersion of agricultural production. and the complexity of the biological processes of production,” the startup’s website states.

To solve the problem of assessing agricultural lands for the purpose of underwriting an insurance policy, the Delhi-based startup uses technologies such as remote sensing, UAV, and others to evaluate risks and arrive at an acceptable policy price.

While many insurers would have taken a largely one-size-fits-all approach, GramCover customises its insurance policies, making them more affordable for farmers and ensuring partners don’t get inundated with excessive risk.

“Although farmers’ incomes are relatively small, we can create value in their insurance purchases by insulating them from a risk for which they otherwise would have had to self-insure, and consequently suffer from significant financial impact in the case of any adverse or calamitous event,” Jatin says.

“At GramCover, we leverage technology and bring access to insurance for rural customers, through relevant products that they can purchase easily at affordable prices,” he adds.

GramCover earns most of its revenue from the premiums it distributes and the policies it underwrites.

Its insurance partners shell out between 10 percent and 16.5 percent in brokerage for its services, and the ticket sizes of insurance products on the platform usually range from Rs 35 to Rs 2,000. Sales are done via the startup’s technology platform and its point-of-sale partner network.

The startup is profitable, and expects to remain so in FY21. Jatin anticipates the company will surpass Rs 100 crore in gross premium this year, as well as expand into new markets such as Rajasthan, Haryana, Gujarat, Madhya Pradesh, Chhattisgarh, Tamil Nadu, and Karnataka.

GramCover has raised nearly Rs 1.2 million in funding from investors including EMVC, Flourish, and Omidyar Network India, in a seed and a pre-Series A round, and is now heading for its Series A.

Insurance in India is still a growing sector, accelerated in recent years only thanks to the penetration of fintech startups that have digitised the process of insurance buying and premium top-ups.

Insurance penetration in India — measured as the ratio of insurance premium paid and GDP of the country — rose to nearly 3.7 percent in FY19, versus 2.71 percent in 2001. Still, it lags significantly behind the 6.3 percent average in the rest of the world, as well as other emerging Asian economies, according to a study by IBEF.

The global crop insurance market is expected to hit $53.02 billion by 2027, growing at a CAGR of 6.1 percent, from $34.05 billion in 2019, according to Allied Market Research. India is the third largest market in terms of crop insurance, behind the US and China. However, the Insurance Regulatory and Development Authority (IDRAI) estimates only 19 percent of farmers make use of crop insurance.

Global insurance giant Swiss Re estimates that premiums in the agriculture insurance sector could surpass $1 billion by 2020.

GramCover’s competitors include firms such as HDFC ERGO, IFFCO Tokio, Aviva India, Cholamandalam, and TATA AIG, among others, as well as district co-operative banks that provide insurance products in rural India. However, most of these companies are partners with GramCover, which operates as an insurance aggregator platform.