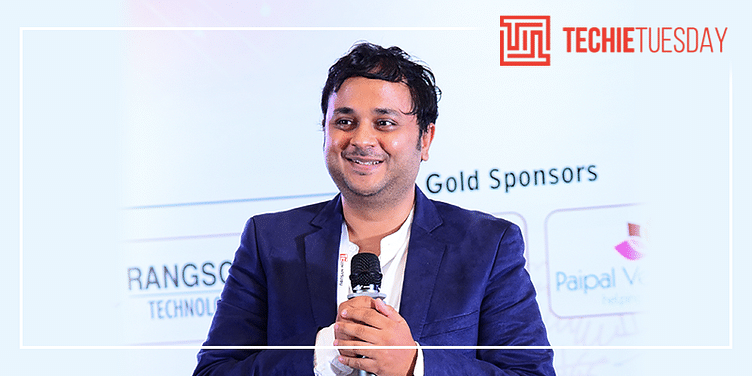 Madhusudhan Anand was born in a middle-class family in rural Karnataka. Today, he is the Co-founder and CTO of Ambee, a global environmental intelligence startup.

Albert Einstein once said, “I have no special talent. I am only passionately curious.” This has been Madhusudhan Anand’s lige mantra.

Hailing from a middle-class family, Madhusudhan’s childhood was spent studying at a government school near a highway in rural Karnataka.

“Most teachers didn’t know how to speak English. My classmates were either sheepherders or farmers, or had a very poor background. Even having a chappal (slippers) was something to be proud of,” Madhusudhan reminisces.

Today, Madhusudhan is the Co-founder and CTO of ﻿Ambee﻿, a global environmental intelligence startup that measures air quality data in real time through AI and IoT.

Ambee has air quality data for over one lakh pin codes across 65 countries. Its APIs can be integrated into healthcare devices, fitness apps, air purifiers, smart cities, office spaces, and homes. The startup currently works with several companies, including Fortune 500 companies like Airbus and Bosch.

Having more than 18 years of experience, Madhusudhan has done over 100+ courses across multiple computer languages in the past two years and has trained over 2,000 programmers worldwide in the last six years.

Prior to co-founding Ambee, he was the Co-founder at Adom Technologies, an IoT hardware and software product company and has previously worked as an Engineering Manager at ﻿HackerEarth﻿, a technology startup skilling developers of tomorrow. He has also worked in various roles at product companies like Dell, HP, and Avaya.

“At a very early age, I understood the importance of hard work. I have always had two jobs right from college, and I was always learning something while working. I see everything optimistically as a problem that could be solved and I try to see it from different angles,” Madhusudhan tells YourStory.

Madhusudhan shares that his childhood friends had a remarkable influence on him, which pushed him to continue doing hard work and value success. One of his classmates used to continuously watch outside the window during classes.

“Later, I came to know that he walked 10 km from his home with his sheep herd and was watching over them during school time. He had no chappal (slippers), wore old clothes, and only ate jowar roti, powder, and onion every day. Today, he is working at Pixar Animation, a subsidiary of Walt Disney Studios,” he smiles.

Growing up with several other friends with similar rags to riches story moved Madhusudhan to work hard at school.

Later, the eagerness to learn something new attracted Madhusudan towards computers.

“I was in Class 8 in 1997-98 when someone donated a computer to our school. Among 200 students, only the top three were given tokens to get a 45-minute session each on that computer, which only had DOS. Later, a computer centre also opened in our village and I started learning C, C++ there,” he adds.

Willing to make himself financially stable, Madhusudhan opted to pursue Bachelor’s of Electronics from Bengaluru University in 2003.

“I was selected for engineering but it was not a government seat. My father was not ready to pay and wanted me to try again. In fact, he used to sing a sarcastic parable saying that a BSc degree cannot get a job. I just wanted to prove him wrong and start really early. So, I decided to start earning as well as continue with my education,” he adds.

During his first year of college, he started doing odd part-time jobs at Bengaluru Mall, handing out BPL batteries, taking surveys on bikes, and more. The first turning point came when he applied for an on-campus interview in Dell.

Although after getting selected in the aptitude test, the faculty tried to reject the application since he was only in his first year. However, the ﻿Dell Technologies﻿ coordinator took his interview and he was the only one selected from the entire batch.

“When other kids join college, they get mobiles and bikes. I was happy because I got to wear shoes instead of slippers. In my first job, I used to get a salary once every three months. At Dell, my shift timings were 5 pm to 2 am, and I was paid Rs 7,500 monthly. I got my first debit card and could buy a mobile phone on my own. I was learning, earning, and enjoying” he adds.

For Madhusudhan, Dell had been a great learning experience. Microsoft had bought thousands of servers from Dell and the company needed someone to write a script to add RAID software to the server which allows the data to remain intact even if the server dies, as well as send an alert to the team.

“Among the team with an average age of 28-30 years, there I was an 18-year-old and I was good at it. For the first six months, I was taught CSharp, learned a lot about servers, networking, IP, TCP, Dotnet, and more. However, soon after watching others grow and learn, FOMO (fear of missing out) crept in, pushing me to learn more,” he adds.

For the next four years, he kept on learning learned new things like Red Hat Linux at Dell, and worked with several companies like Avaya, HP, among others in the next seven years.

When Madhusudhan finished training at Dell, he received a company handbook on how Michael Dell started Dell from a garage. “Nobody talked about entrepreneurship at that time, but that story stuck in the back of my mind. So, when I got my chance, I grabbed it with open hands,” he adds.

While working at Dell, Madhusudhan used to write blogs and build websites as a side gig. As the internet grew, he started getting assignments from the US. Soon, he built his team of four friends and began churning out websites, earning almost $5,000 a week.

“Our monthly salary was literally half of what we were making weekly with these websites. But soon, it started to haunt us. We were inexperienced, and unable to offer support. Within few months, our team disbanded,” he says.

Again, bad luck struck as the company considered the product too tech-savvy and didn’t use it. Later on, they got an opportunity to sell their device to a US-based fleet company looking for GPS trackers for their vehicles. This framed the genesis to set up his first startup Adom Technologies.

He got his first cheque on the day of his wedding, and told his soon-to-be-wife that he would be quitting his job.

Madhusudhan continued with Adom Technologies for two years. However, the lack of team support pushed the startup downhill within two years. He found a job with Citigengaze, a waste management technology platform, which he quit after seven months.

Later, he joined HackerEarth as an Engineering Manager in 2016. This was also the time when he also became a proud father.

As Madhusudhan’s son started developing severe breathing issues, he started monitoring the air quality in and around his residence at Electronic City, Bengaluru. To his surprise, he found that the nearest air quality monitoring station was located 13 km away, and it showed signs of healthy air quality.

To get a better sense of the air quality in his immediate surroundings, he put together a rudimentary air quality sensor that gave him real-time data about the quality of air around his house. He found that the levels of particulate matter (PM2.5) near his house were touching dangerous levels of 800, exceeding the safe limit by over 13 times.

He realised that there were hardly any tools to access information about the air quality in the immediate surrounding.

Madhusudhan quit his job and started Ambee in 2017 to empower people with data about hyperlocal air quality in real time to help them understand the impact of air pollution, take precautions, and find solutions.

“This app is free for consumers. We have a lot of personalisation and customisation features now. We are backed by marquee investors like Rajan Anandan and Bhaskar Raju, among others. We are helping to track both downstream and upstream problems to fix air issues, using data science to help companies see the effect of climate change,” he adds.

Today their vision statement is not just to help millions of people, but to improve the health of the planet itself.

“We are Asia’s first pollen-tracking app to provide pollen count data across the world. We are also working with many other global companies to help with climate change issues,” he adds.

Madhusudhan believes his passion for continuous learning, and the love for creating, destroying and recreating to build something better worked for him.

“I am from an era where there was no YouTube, no open-source, no Javascript, and no free access to learning on the internet. Information was scarce, but the internet has changed all that,” he adds.

But as easy it is to learn, it is also easy to fall prey to the problem of plenty. So his advice to techies is to have specialisation, always question before doing anything, and do not limit their ambitions to just earning money.

“You learnt engineering to build something; apply that to make a difference. As many as 95 percent of techies stop learning at a point. But all the great stories emerge from the remaining 5 percent who never stopped learning,” he concludes.