Brands of India: GlobalBees CEO Nitin Agarwal on the startup’s plans to impact the consumer economy, reach $1B revenue 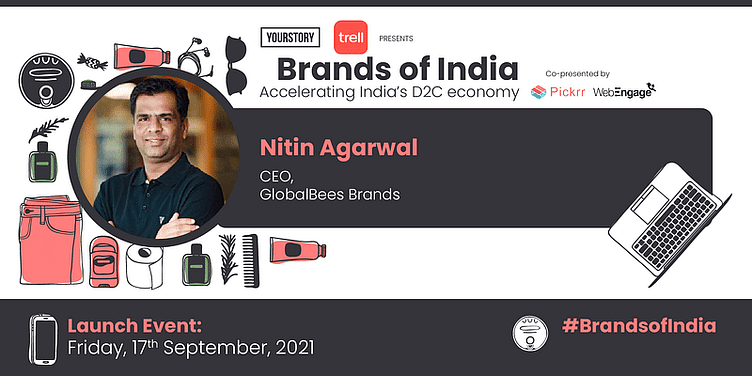 ﻿GlobalBees﻿, an investment platform modelled on Thrasio — which acquires sellers on Amazon and provides them with resources to scale their brand, is aiming to touch $1 billion in revenue by 2026 and turn into a profitable startup.

In an exclusive interaction with YourStory during its flagship Brands of India event, Nitin Agarwal, CEO and Founder, GlobalBees, shared the benchmark the startup has set to measure success.

“If I were to give you a kind of ballpark number, we’re looking to hit at least a billion-dollar revenue in five years, and be a profitable company. These are the two benchmarks that we measure ourselves on,” the CEO said.

Founded by ﻿FirstCry﻿ founder Supam Maheshwari and Edelweiss’ former President and Group Chief Investment Officer (CIO) Nitin Agarwal, GlobalBees looks to partner with digitally native brands across categories such as beauty and personal care, home, kitchen, food, nutrition, sports, and lifestyle. These brands need to have a revenue rate between $1 million and $20 million, which, as per the company, is proof of the product-market fit.

The startup then helps these brands grow, scale, and sell to marketplaces such as Amazon and Flipkart, and through other channels.

Within three months, GlobalBees had managed to raise a record $150 million in a Series A financing round led by FirstCry, Lightspeed Venture Partners, and others. The latest round led to Vikas Agnihotri of Softbank, Harsha Kumar of Lightspeed, Atul Gupta of Premji Invest, Sudhir Sethi of Chiratae Ventures, and Kshitij Sheth of Chrys Capital to join GlobalBees’ board.

Following the funding, the startup was reportedly in the process of integrating over 10 digitally native brands in the country.

However, Nitin denied any such development, saying, “I think somebody kind of imagined that in the night and that number. We are not really counting numbers or talking about 10, 20, or 50 brands. We are just looking on a deal by deal basis with so many good companies and entrepreneurs around,” he said.

The Thrasio-style model seems to have caught the investors eye in India, who are increasingly looking to clone the business in the country. Thrasio is a New York-based digital consumer goods company that invests in, acquires, and grows seller businesses across marketplaces such as Amazon through investments in technology, working capital, and marketing efforts.

Over the past few months, several other companies including ﻿10Club﻿, ﻿Powerhouse91﻿, ﻿Evenflow﻿, and ﻿Mensa Brands﻿ have closed significant funding deals to tap into the growing D2C market.

“We have come a long way from where we started in May. Whatever initial targets we had set up for ourselves, we have literally surpassed those by 2x already. We will see a lot more exciting numbers to come,” said Nitin.

The founder said it will take about three to four years to term GlobalBees as a successful model, and it will all depend on ‘kicking the innovation engine’, which otherwise has been slow in the consumer (physical) retail industry owing to limited shelf space and hence, quick replacements.

“Innovations have been sparse in consumer retail. Every time you want to innovate a product, you will replace one with another because of the limited retail shelf space. This has not allowed the innovation engine to kick in at large. In contrast, our success would be being able to take these innovations at scale and consolidate them as a globally scalable business,” said Nitin.

The company is looking at making an impact in at least three categories of the consumer economy to build significantly large businesses.

In its first deal in August 2021, GlobalBees acquired home care products company—The Better Home—at an undisclosed amount. The brand, which is born out of the digital content platform, The Better India, retails sustainable household products such as dishwashing liquid, home cleaners, air fresheners, laundry cleaners etc on their website and on ﻿Amazon﻿, and claims to have a presence across 600 cities. GlobalBees has signed three other deals, said Nitin.

GlobalBees is looking at expanding the line of products and take the brand to international markets. It is betting on the growing demand for eco-friendly and toxin-free home cleaning products and the community-led (The Better India) demand. The brand hit a monthly revenue of Rs 1 crore in October 2020, just nine months after launch.

“The Better Home symbolises what consumers need today. We realised where the demand is moving and see a huge potential in the segment. Dhimant and Anuradha (founders) will continue to run the content while we will help expand the brand and the product,” said Nitin.

Brands of India is a YourStory initiative to catalyse the growth of India's D2C economy. The initiative will bring together D2C ecosystem stakeholders, including brand builders, D2C startups, investors, corporates, and policymakers, to discover, build and help daring entrepreneurs create an additional 500 Brands of India in the next three years.

To know more about this initiative and the D2C ecosystem, visit brandsofindia.yourstory.com