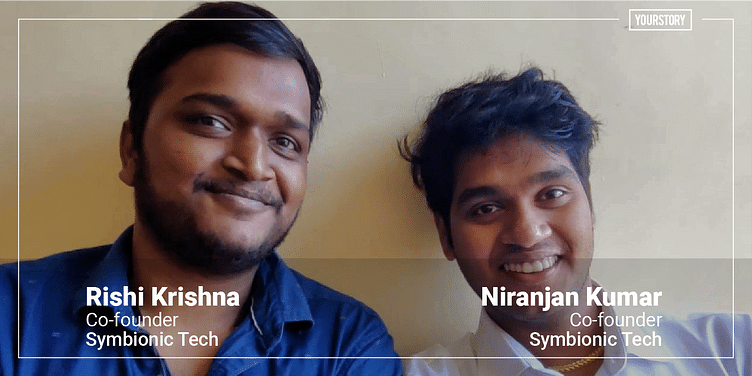 Founded in 2019 by Rishi Krishna and Niranjan Kumar, Symbionic is an affordable, assistive technology startup that makes smart prosthetic devices. The device is nearly 30X cheaper than foreign, imported devices that are mostly used these days.

Four years ago, a freak bus accident on his way to Pondicherry upended Rishi Krishna’s life. Not because it resulted in an amputation in his right arm, or even because he had to deal with some of the darker days in his life, so far. But because the sum of all the experiences he had after the accident resulted in him making a bid for the entrepreneurial life, where his sole mission is to lend a helping hand to other amputees like him.

His startup ﻿Symbionic﻿, an affordable assistive technology venture, focuses on easing the pain and discomfort that amputees often face, especially with trying to use bionic, smart prosthetics.

It’s a pain and discomfort Rishi is well acquainted with.

“After my amputation, I started looking at all the prosthetic options available in the market and realised that the decent ones were upwards of Rs 20 lakh. And when you’re in that frame of mind, it’s easy to see those Rs 20 lakh as not really meaning anything if it could get you something that could closely replace your arm,” he tells YourStory.

For a majority of Indians, Rs 20 lakh is something they might never see in their lives. But even beyond just the cost, options for smart prosthetics currently in the market are uncomfortable — they’re either too heavy, or too non-intuitive. And those were all issues Rishi himself dealt with.

“Ultimately, I removed the prosthetic I’d bought for myself and kept it aside, which is exactly what most other people do,” he says.

Call it desperation or innovation, Rishi decided to do something about it. Sitting idly by was not an option for someone who wanted to keep travelling, and not let his amputation become a hindrance. So he teamed up with his friends, and decided to make himself an arm he would use.

Soon, the college project turned into a full-fledged startup, and the rest, as they say, is history.

Personal experience had taught Rishi that the options available to amputees in the market these days had a couple of issues with them:

All of these factors ultimately led to the prosthetic device being tossed aside, never to see the light of day again.

Symbionic solves all these problems poignantly.

The prosthetic products the startup offers are all highly customisable. The amputated stump is 3D-mapped and printed, so that the socket is a perfect fit for the wearer and does not make their arm sore. And this prevails throughout the lifecycle of the amputee, where they can avail themselves customised sockets as their body changes and grows.

As opposed to a majority of other brands that use parts made out of metal in their smart prosthetics, which ultimately makes the device heavy and painful to wear for extended periods, Symbionic uses bio-grade plastics and other lightweight materials. This not only makes the device comfortable to use, but also ensures its longevity.

This AI-based telehealth startup is providing a platform to enable healthcare access from anywhere, anytime

Symbionic has developed and designed the sensors it uses to help give the arm functionality, in-house, using locally available products, which drastically reduces manufacturing costs. The replacement of metal parts with biograde alternatives further allows the startup to offer its smart prosthetics at a much affordable price than what’s available in the market today.

A quick search on IndiaMart for smart bionic prosthetics throws up options from Rs 8 lakh onwards for those made by foreign companies and exported to India, which is quite expensive for the average Indian, especially considering no after-sales service is available.

In contrast, Symbionic’s full prosthetic smart arm — which is customised right down to the fingers — currently retails for Rs 2 lakh. And Rishi says he will bring the manufacturing cost down to less than Rs 1 lakh soon.

Rishi elucidates the frustration amputees face — on top of pre-existing mental anguish — when trying to work a smart prosthetic with the following example:

“Suppose you wanted to use your voice assistant, like Siri, to make a call, and you said, “Siri, call Mrs XYZ”, but nothing happens. So you try again, a second and a third time. Maybe you’ll give it a fourth try, or even a fifth one — and then Siri starts dialling Mr ABC instead of Mrs XYZ. She finally gets it on the seventh try. Would you go through this entire process a second or a third, or, if you were exceptionally desperate to make it work, the tenth time?.”

That is the case with most bionic prosthetics today, especially when it comes down to actually using the functions the arm promises. The best devices that exist today offer a decent 78-93 percent functionality, and with practice that does get better. But not many people stay patient enough through the process.

“You don’t want something that’s a hit or a miss — you want the functions to work 98-99 percent of the time. Only then will the person wearing it feel confident enough and encouraged to keep using the prosthetic,” he says.

To solve that, Rishi and his co-founder, Niranjan Kumar, the Chief Technology Officer of the startup, added layers such as AI-based pattern recognition and an app-based pattern tracking system to supercharge the already superior sensors.

Other features such as a rotatable wrist, individual control for all fingers, and a functional thumb, all set the device apart from its competitors, as well as mimic the body’s functionalities closely.

Today, Rishi says he has a device he can finally wear — although he wants to keep iterating the product until it ticks all the boxes and meets the vision he has in his mind.

“I’m my company’s own lab rat,” he says, comically alluding to the fact that he probably went through more pain and discomfort creating a prosthetic device that can help others avoid that, than he would have had he just accepted his fate and stuck with whatever was on the market.

Symbionic currently specialises in creating prosthetics only for above and below-the-elbow amputees, and hopes to expand in this category more broadly.

While most devices on the market take more than a month to get the hang of, the learning curve is quite short with Symbionic’s product. It takes amputees less than 10 days to master the product, especially when used in conjunction with the startup’s app that tracks, monitors and helps train the wearers, and improves grip functionalities.

Rishi says he’s currently testing his MVP, and is a month away from a beta launch, which he plans to conduct with amputees in his network.

He plans to launch the product commercially in January 2022.

Symbionic will initially sell the device directly to amputees, although Rishi says the way forward will be to collaborate with doctors and set up 3D mapping and printing capabilities right inside their clinics, which is something he’s currently working on.

Rishi and his team are also building an online training and rehabilitation platform, that uses virtual reality, for amputees across the world. Symbionic has partnered with NGOs/NPOs such as Mukti to pilot the study of their prosthetics, and hope to continue working with them to provide support in the future.

The startup has raised nearly Rs 30 lakh as pre-seed funding from BIRAC, and did a crowdfunding campaign on Kickstarter, which gave it enough firepower to fuel its R&D. Rishi says he has started to look for institutional funding that he aims to use to hire engineers passionate about solving this problem.

The company is part of ATF Labs’ accelerator programme, and was incubated by VITTBI.

“My hope is that people using our product realise the amount of empathy that we’ve made our device with. I want people to feel delighted about purchasing a product from us, the way you would if you were buying an iPhone. It doesn’t need to be shrouded in shame or embarrassment anymore,” Rishi says, adding “It’s a cool thing we’re building, and we want people to feel cool wearing them too.”

The addressable market for prosthetics and orthotics was around $6.11 billion in 2020, globally, and is expected to grow at a CAGR of 4.2 percent till 2028, a Grand View Research report stated. According to SKP Business Consulting, the Indian ortho and prosthetic devices market is valued at over $450 million, and grow at over 30 percent per year.

A number of startups with varied value propositions, including ﻿Grasp Bionics﻿, ﻿Makers Hive﻿, ProLiving, and a host of others are rapidly changing the game for bionics in India, and creating devices that don’t hurt the consumers’ pockets too much.