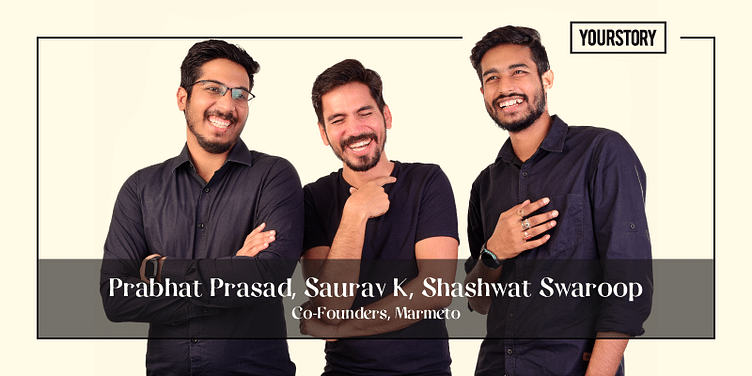 Bootstrapped with about Rs 14,000 in 2017, the tech startup has grown to a team of over 50, all working remotely, and is clocking revenue of up to $1 million a year.

India does not have a dearth of web development companies, with the sector being one of the hottest in the country. According to LinkedIn’s 2020 Emerging Jobs Report India, jobs like JavaScript developer, backend developer, full-stack engineer, Python developer, and front-end engineer are featured on the list of top 15 emerging jobs.

However, 26-year-old Shashwat Swaroop tells YourStory that the rapid evolution of technology and market volatility has made it difficult for companies to stay afloat. This is where Bengaluru-based startup ﻿Marmeto﻿steps in.

While pursuing engineering at New Horizon College of Engineering, Bengaluru, Shashwat, along with college-friends-turned-founders Prabhat Prasad and Saurav K, decided to dabble in entrepreneurship. They started an ecommerce venture which enabled people to rent books online and scaled it to approximately 150-200 orders per day.

“But, as luck would have it, the business faced some teething issues with scalability and other unfavourable factors that led us to take the hard decision of shutting it down, within a year,” tells Shashwat. Co-founder and CEO, Marmeto.

After college, while Shashwat dabbled in a few ecommerce consultation roles, Saurav joined retail intelligence company Mobisy and started to build his corporate career. In 2017, they connected again and decided to start something of their own once again.

They used a total of Rs 14,000, roped in a designer and rented two seats in a co-working space in Bengaluru. “At this point, no one was drawing salaries, we did not have a lead pipeline, we had zero service industry experience, and no clarity on the road that lay ahead. We were sure of one thing though – we wanted to make some noise and create a difference in the world of ecommerce,” tells Shashwat.

So, they started Marmeto as a web development company, which now helps ecommerce brands to built tech, mostly on Shopify.

“We believe in simplifying commerce. We build websites, apps, and enterprise solutions on Shopify,” tells 26-year-old co-founder Saurav. He also adds that the company does not associate itself as a web development company anymore, but rather a commerce enabler.

In the startup’s early days, it offered a gamut of services – from website design to website development, social media content creation services, and “whatever else came our way,” says Shashwat. Within six months, the trio saw a major supply-demand gap.

On one hand, major ecommerce players offering website building services like Shopify, Wix, Woo Commerce, were penetrating the Indian market, on the other hand, the Indian market was dealing with its own set of problems like functionality, logistics, price points, and response times. The ecommerce market has been on the rise since 2015, but the inertia regarding online payments and apps meant slow growth and slower market penetration, according to the Marmeto founders.

Eventually, the trio decided to primarily focus on website development on Shopify. “We zoomed our focus on building unique solutions on Shopify, and becoming an end-to-end Shopify development agency,” tells 25-year-old Prabhat.

“We realised that clients do not completely understand the website’s target demographics, and the ones who do, don’t grasp the intricacies of the tech behind the website functionalities. Moreover, every project lacked a clear understanding of the ecommerce user experience and the aesthetic focus heavily outweighed the website’s functional performance,” he adds.

Prabhat tells that when the team decided to focus on Shopify two years ago, it built numerous solutions in the platform’s native language “LIQUID” in less than a year. “We gained expertise on a coding language that many were oblivious to. This put us on the map with the ecommerce industry in India and helped us land our first biggies like Soulflower, Qtrove, and Headphonezone,” Prabhat adds.

The Indian ecommerce or e-tail market grew by 25 percent during the 2020-21 financial year to touch $38 billion in size, despite the retail market shrinking by 5 percent due to the impact of coronavirus, according to a report by Bain & Company and Flipkart. Given that the COVID-19 pandemic is still ongoing, with some sense of stability returning, the report also noted that the e-retail market is expected to grow to $120–140 billion by FY26 at approximately 25 – 30 percent per annum.

For Marmeto, this is an opportunity to tap into unparalleled demand. “Ours is a very big market for ecommerce and is enough to sustain,” says Saurav.

The startup competes with any web development company that helps build ecommerce businesses, but Shashwat says Marmeto stands out for going the extra mile in competitive pricing in each of its projects.

“We’ve built a unique positioning for ourselves in the market by not offering the conventional, but by offering something better,” says Saurav. According to him, most web development agencies offer an AMC (at minimum cost) as a yearly fee for website maintenance, which Marmeto does not take from its clients because the startup claims that they don’t build websites that crash.

“We understand the Shopify structure so well that we build all kinds of tech solutions around it. We work with logistics partners such as Delhivery, Shiprocket, and DHL; payment partners like CRED, Paypal, Razorpay, and PayU; and VAS (value-added service) partners like Qwikcilver and Ticket Xpress to build enterprise Shopify solutions and apps,” explains Saurav. He says that Marmeto covers the entire tech enablement scope of services with respect to ecommerce.

But the founders claim what really makes Marmeto stand out is its speed or response time. “Right from catering to a cold lead to feedback in project deliveries, we offer timelines that are unmatched in the industry at the moment,” Prabhat adds.

Marmeto has two models for revenue – a one-time project fee, and the second is long-term retainer model.

“These two cater to two different stages of growth. The former is usually availed by SMEs looking to launch a new website or a website revamp or by established businesses that need a specific custom solution built. The latter is used by enterprise businesses or funded startups that churn heavily in marketing, resulting in constant updates and changes on the websites,” tells Shashwat.

He adds in the past two years, it has built its expertise on Shopify and scaled its operations, and claims that Marmeto has grown its revenue by 2x and has crossed the $1 million revenue mark in FY21. He tells that the company has worked with a plethora of brands ranging from healthcare, beauty apparel, edtech, to food and beverages The company also has some global clients such as Mordilliac Florists and Shyn.

The CEO adds the company’s biggest achievements was scaling the team and going 100 percent remote overnight while working tirelessly on more than 50 websites successfully throughout the three-month lockdown in 2020 and serving clients on priority. The founder boasts that the company’s growth in the past four years has been completely organic and largely referral-based.

The company started with seed money of Rs 14,000, and after that, its growth fueled the operations. Shashwat tells that Marmeto plans to scale up operations in and around ecommerce aggressively in the next 12-18 months. He adds that the company is now chasing 150-200 percent growth for this fiscal.

While the company wants to focus on its existing service, it is also looking at venturing into other ecommerce services such as a loyalty programme for its clients which will shorten turnaround time even more.

“Lastly, we are also looking forward to launching a Marmeto Accelerator platform that would allow us to cater and serve some curated bootstrapped startups and smaller organisations while offering them the Marmeto community experience for ecommerce,” says Shashwat.