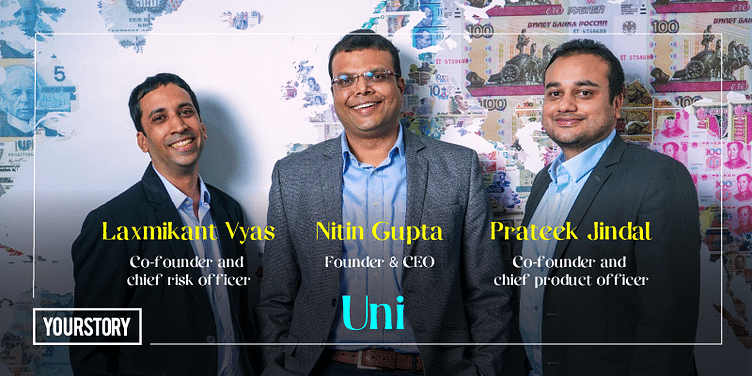 An extension of the recent ‘BNPL’ phenomenon that has helped boost consumer lending in India, Uni is a Bengaluru-based card startup that allows users to split their payments into three parts to be paid back over three months without any extra charges.

When 24-year-old Deb lost his father to COVID-19 last year, it became very important to maintain close contact with his grieving mother as he returned to his office in Bengaluru from Darjeeling.

He decided to buy her a good smartphone with video-calling capabilities so he could check up on her from time to time. But his father’s treatment had drained the family financially, and it was hard to scrounge up money even for his father’s last rites.

“Those were tough times and we couldn’t lean on our extended family because you never know when COVID-19 could hit someone. Everyone has been, understandably, penny-pinching,” Deb tells YourStory.

With loans waiting to be repaid, and his credit card maxed out, he was in a fix. What he needed was a small loan that didn’t immediately start accruing interest.

That’s when his friend led him to Uni, a new consumer loan startup, which allows borrowers to split their repayments into three parts, and pay them over three months without attracting any additional debt in the form of interest rates.

The Netflix of stock trading: How RAIN is democratising algo and quant trading for retail investors

Deb got a Uni card and bought a smartphone worth Rs 18,000 for his mother, and now has to pay back a manageable amount of Rs 6,000 per month.

“In my last company, we surveyed the employees and found that about 40 percent had borrowed money from friends or family. And that's when it dawned upon us that almost everyone has faced a short liquidity crisis at one point or the other,” Nitin tells YourStory.

“There’s no good solution for such crises, barring borrowing from friends and family, relying on a credit card or breaking a fixed deposit. A user does not want a 12-24 months personal loan of Rs 2 lakh so they end up committing to an EMI for this short-term liquidity crisis,” he adds.

But EMIs typically come with interest rates and end up putting more financial strain on the borrower instead of easing it.

Credit cards do provide instant credit, but they ask for monthly repayments, and penalise users by levying lofty interest rates when they fail to do so.

This is what led Nitin and Prateek to set up Uni’s flagship product Pay 1/3rd.

A credit product that helps more than it hurts

Pay 1/3rd allows users to split their payments into three parts, which they can pay off in three months without paying any interest rates.

Nitin says this is the longest credit-free period card in the market, currently, closely rivalled only by BNPL (buy now, pay later) players, a majority of which only enable ecommerce or online transactions via their apps.

Users who do pay off their total outstanding balance in one shot get rewarded with a cashback of 1 percent, which goes a long way to incentivising more people to pay back as soon as they can.

“We are telling customers — if you pay back (whatever credit has been put on the card) you get a 1 percent reward, but when you have a cash crunch, you can give up that 1 percent cashback reward and pay that amount over three months, at no extra cost. That is the fundamental proposition to the customer — flexibility of trading your 1 percent reward for paying over three months,” Nitin says.

Essentially, rewarding users for repaying their dues on time, but also not penalising them if they aren’t able to.

Uni plans to launch additional features such as letting users divide their transactions into longer-term EMIs, as well as enabling ‘scan and pay’ on the app soon.

It highlights that any late payment, delivery and related fees it levies on the user are transparent, and disclosed beforehand.

Uni launched its beta in June 2021, and has amassed 12,000 customers on the back of 80,000 downloads without spending a dollar on marketing, proving there is a dire need for a more relaxed, consumer-first credit product in the market today.

Nitin says he was surprised at the kind of traction Uni has been receiving since its launch. The startup claims to be adding almost a thousand carded customers every day since it came out of its beta testing phase.

“We are pretty confident that over the next 12 months, we will add a million carded customers to our platform. Three out of every ten customers want this product as they become aware of it,” he adds.

Uni primarily earns its revenue from its merchant partners, as well as from the interest customers pay on longer-term EMIs and when they fail to pay their instalments on time. The startup does not currently charge customers an annual or sign-up fee, and the card is issued by Visa.

It is present in 28 cities across India, and plans to expand to 60 cities by early next year. The startup’s main competitors include other pay-later card fintechs such as ﻿SlicePay﻿, ﻿MobiKwik﻿, OlaMoney Postpaid Card, as well as BNPL players such as ﻿Simpl﻿, LazyPay, ﻿Paytm﻿ Postpaid, ﻿Flipkart﻿ Pay Later, among others.

How FamPay went from having to shut down operations during the pandemic, to growing its user base 10X in months

Nitin says what differentiates Uni from others in the ecosystem is the way the startup is solving for different consumer segments, its “significantly better product”, the expertise of the founding team, and a razor-sharp focus on the innovation of more products in the category.

The Bengaluru-headquartered startup has raised $18.5 million so far from Lightspeed India Partners, and Accel India.

As of August 2020, only 58 million credit cards were in use in India, a Statista report showed. The severely underpenetrated credit card industry in the country, however, is expected to grow at a CAGR of more than 25 percent by 2025 and with more consumer-friendly solutions like Uni, these numbers are expected to rise.