[Tech50] India’s youngest unicorn Apna is hungry for more, aims to go global by touching more than 2B users 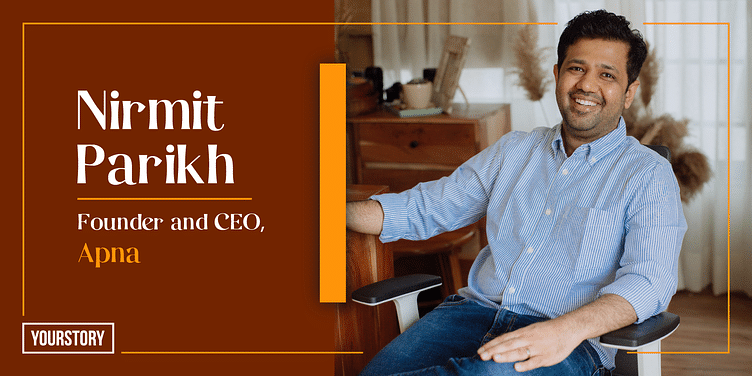 YourStory's Tech50 2021 startup, Apna recently entered the unicorn club after raising $100M Series C round led by Tiger Global. In conversation with YourStory, Nirmit Parikh, Founder and CEO, Apna, talks about what helped the company make a mark, how it is targeting an underserved market.

Nirmit Parikh was in Dallas when news of his startup, jobs and professional networking platform ﻿Apna﻿, entering the unicorn club reached him. It may have rung in celebrations for the 20-month-old, but Nirmit was focused on other things — primarily an expansion into the Southeast Asian and US markets.

“I spent the day with some of the workforce here to understand what they need in terms of upskilling and growth. The needs of this market are very different, and we believe growth in these markets is the next step for us,” says Nirmit in a conversation with YourStory.

The pre-revenue startup has already seen 125X growth. The platform has over five million job openings on the portal, 150,000 SMBs, and enterprise recruiters on the platform, 16 million users, and claims to have conducted 18 million interviews. It aims to touch over 2.3 billion people in the working class category across the world within the next two years. Apna is part of YourStory Tech50 2021 startups.

With the latest $100 million Series C funding led by Tiger Global, Apna is now valued at $1.1 billion, and has replaced B2B ecommerce platform Udaan as the youngest startup to reach the unicorn status.

However, Apna isn’t the first in this market. Startups like Betterplace are eyeing the same space and market as JustRojgar and Spayee. So what led investors to bet on this pre-revenue startup?

Nirmit has a one-word answer: consistency.

“If you look at our numbers and growth rate, you realise it has been consistent. And investors appreciate consistency,” he says.

Harshjit Sethi, MD, Sequoia India, agrees. “When Sequoia India first partnered with Apna, it was just an idea. It's amazing to see how quickly they have built the product and scaled in such a short span. The pace of growth is staggering - they have grown 125X in the last 15 months to 16 million users, facilitating 18 million interviews a month. [They] are among the fastest-growing companies we have seen,” he says.

The market Apna is targeting isn’t typically looked at by any of the larger HR portals. It is entirely dedicated to the blue and grey collar workforce, providing working opportunities based on their skillset.

“It is a problem everyone knows is big but always believes someone will solve it. My first order of business was to understand the market. This meant I worked as a plumber, electrician, barkeep, and at every other job for several months before I even began working on solving it using technology,” Nirmit says.

Apna aims to provide people with job opportunities by helping them build a digital professional identity, a solid network, and giving them access to the best local jobs. But it isn’t a market that can be built with a cookie cutter-model; it is vital to understand what people actually need to upskill.

The jobs platform is slowly doing that.

Shivam, a graphic designer who lost his job during the pandemic, started sharing his designs with the Apna community and initiated conversations with other users with similar interests. His passion and hard work got him freelancing work from the Apna community, and today he runs a designing agency and makes close to Rs 50 lakh in a year.

He may be one of the few making a lot of money, but there are several people whose monthly income has risen from Rs 5,000 to Rs 25,000.

Nirmit believes the reason that the grey and blue-collared workforce doesn’t scale is because it doesn’t get the right access to growth engines. He feels a small skill session or helping them understand something as simple as a pivot table can help them find a better job.

Nirmit explains that opportunities are available but there is information asymmetry. This is where Apna’s jobs help. He explains close to 80 percent of the jobs in India comes from social aids and connections. Another important factor is building and creating a network, which the company solves.

“This is due from three aspects: the size of opportunity they are going after, the strength of the founder and the Apna team, and the incredible traction they have seen so quickly after launch. Nirmit has many of the characteristics we see in our best founders. He has incredible clarity of thought, strong intuition for his user base, and is able to attract and lead a tremendous team,” he says.

The startup's platform leverages a sophisticated algorithm that matches candidates with employers taking into account their skills, experience, and preferences. The app comprises close to 70+ communities, including skilled professionals like carpenters, painters, tele callers, field sales agents, delivery personnel, and others.

“Apna is creating professional identities, communities and upward mobility for over 16 million people. The most powerful surprise for me has been the 'increase’ in user engagement during times of uncertainty like COVID-19 that reflects the depth of trust generated by the platform,” says Vaibhav Agrawal, Partner, Lightspeed India.