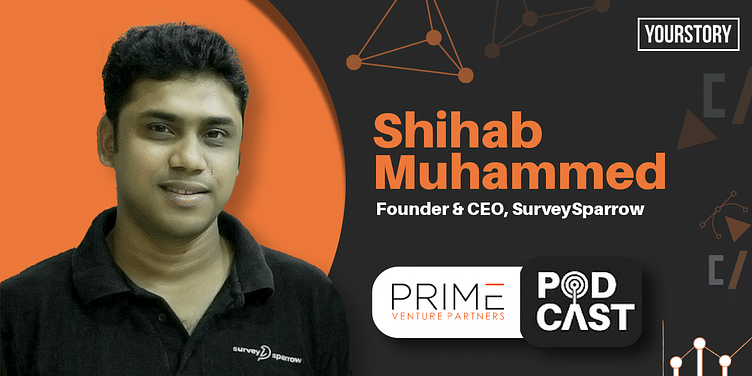 In a recent conversation on Prime Venture Podcast, Shihab Muhammed, CEO and Founder of SurveySparrow, shared his journey from Zoho to Freshworks, and finally, SurveySparrow. He discussed the importance of building a minimum usable SaaS product, along with the rising global trends in SaaS.

Shihab Muhammed joined a SaaS company directly out of college. For nearly 15 years, he has seen this space from the best seats in the house as he worked through ﻿Zoho﻿, ﻿Freshworks﻿, and ﻿SurveySparrow﻿.

He says you need to think about customer acceptance first and build something comfortable for people to use. From thereon, you need to take continuous feedback and action to build a brand, turning the company to become as big as Zoho and Freshworks.

The secret sauce to building a category-defining startup: Vidit Aatrey of Meesho shares his recipe

Shihab gives SurveySparrow’s example to explain the importance of the Minimum Usable Product.

The idea for SurveySparrow comes from Shihab’s own experience with unengaging feedback platforms. He knew he needed to build a product that people can use.

“This meant customers will only buy my product when SurveySparrow’s name does not appear anywhere. I knew that businesses will not want to use my brand or URL,” says Shihab.

Thus, the early days of SurveySparrow saw a simple product that SMBs could use easily to collect feedback. While a few big players, including Qualtrics and SurveyMonkey, were already operating in the field, Shihab focused on usability rather than viability.

“Yes, the big names had a lot of features and were collectively valued over a billion dollars. But, I saw that as an opportunity to target an in-demand market and give customers what they want,” he adds.

Within 50 days of its launch, SurveySparrow had already accumulated over 1,000 customers.

In Shihab’s words, “People who pay for your product want to see your features improve. I want SurveySparrow to become this customer-led brand that listens to its users around every corner.”

He also focused on the necessity of collecting feedback from the employees as they are the ones “who will take care of your customers for you.”

Feedback should sit at the heart of every SaaS brand, he says.

Shihab agrees Zoho has become what it is today by maintaining a solid work culture within the company.

He followed the same principles at Freshworks, when he was still its third employee, and later, in SurveySparrow.

He says, “The hiring idea at Zoho was to catch the talent young. They used to look for people who could solve problems and had the right attitude to aspire big and go for it.”

When he started SurveySparrow, Shihab shifted from the SaaS hub of Chennai and started hiring from

Kochi. “I wanted the right people for the job — good designers, coders, and writers who could solve problems,” he says.

Emerging trends in the SaaS market

In the early 2000s, Shihab saw the SaaS market was majorly sales-led. Salesforce dominated the market that directly sold to C-suites.

Then came the era of marketing-led SaaS companies like HubSpot, which had a great internal marketing team. Recently, it is all about being product-led and selling premium packages. Shihab advises young entrepreneurs who aspire to start a SaaS company to think hard about data security.

“Even SMBs now ask about ISO and other compliances, and they include data security in their company policies,” he says.

18:00: The idea and inspiration for SurveySparrow