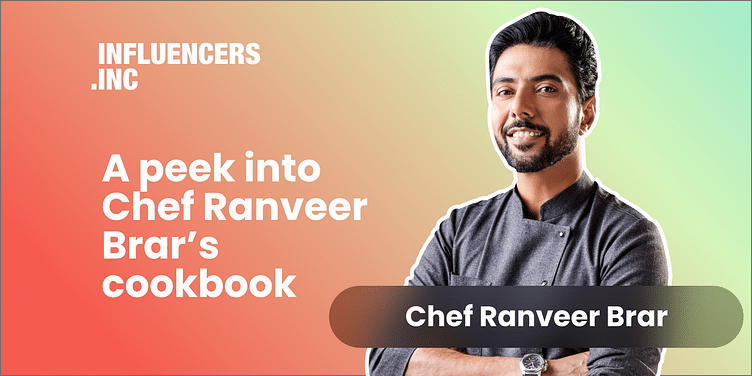 In a conversation with YourStory’s Influencers Inc, celebrity chef Ranveer Brar shares interesting details about his journey as a chef. He also delves deep into the tidbits of the content creation economy.

With a whopping 4.28 million subscribers on YouTube and 1.6 million followers on Instagram, he is one of the most loved and celebrated food content creators in the country.

During a conversation with YourStory’s Influencers Inc, Ranveer says every content creator comes with their unique personality, and that reflects in their content.

Ranveer always considered himself a chef first and a creator later, which allowed him to showcase his skills.

He understood various social media platforms, where he would want to be, audience expectations, and delivered his content accordingly.

Besides, his cravings also play an important role in deciding what to cook.

He says his audience can expect more classical dishes with history or stories behind them from his cooking channel. For him, the content evolution began with fusion food, and now, he is moving towards classical dishes.

“I want to cook food that is classic, simple, and soothing. Soul food is my way forward for now, at least for the next five years,” says Ranveer.

He explains it is impossible to please every person, and trying to make everyone happy is one of the biggest mistakes he made early on.

According to him, every person comes with their flaws, and there is no need to mask one’s true self to make them happy. He adds that “keeping it simple” is the way to go in terms of content creation.

“In life, we might start with needing a lot, requiring a lot, but eventually, we realise a very few things that make a difference,” he says.

Dealing with criticisms can be tough, and Ranveer says one must know how to differentiate between constructive criticism and someone having a bad day.

“You need to be a little numb and a little dumb,” he says.

His advice to young creators is to not indulge in overthinking every comment made on social media.

During the rapid-fire round of the interview with YourStory’s Influencers Inc, Ranveer expresses his love for Desi Chinese, Kheer, and Phuchka, while sharing some interesting culinary tips with the audience.