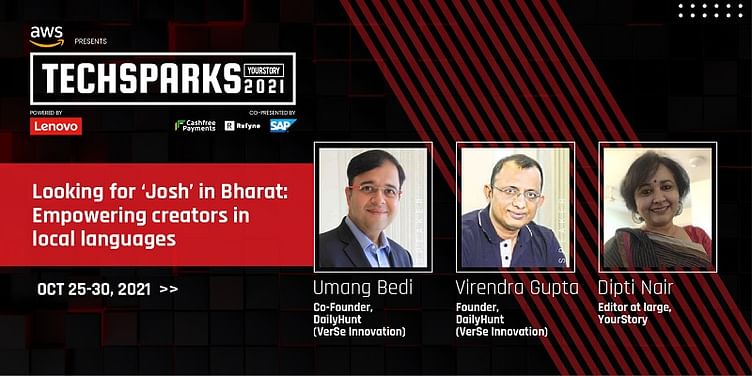 An adolescent rapper discovered on the streets of Karnal, who eventually goes on to be coached by Badshah, his own music, and a front cover for Rolling Stones.

Meet the new and emerging stars like him from painters to dancing geniuses, from homegrown comics to storytellers and fitness fiends. Not from the heavens, or Bollywood, Tollywood, or Kollywood, but made by Bharat and for Bharat. These are ultra-cool creators from across Dharavi to Coimbatore mining Tier II, Tier III, and Tier IV demographics.

Over the last 12 months, news aggregator Dailyhunt’s year-old short-form video app Josh has grown to acquire over 124 million monthly active users every month and nearly 60 million-plus ‘comeback’ every day with users spending over 24 minutes of time on an average.

“More than 50 million people among this entire audience have created content and put it on the platform. You know, the monthly submissions are up to about over 105-to-110 million pieces of content every month,” Umang added as he, along with founder Virendra Gupta, sat down for an exclusive Fireside chat at TechSparks 2021.

Virendra, popularly known as Viru, added, “Our company size has doubled now. That’s another josh that has happened.”

Owing to the nature of the business, a lot of those working at Josh are essentially young people with an average age of 22-23 years. “During the pandemic, sitting at home, we have hired about 600-700 people,” he added.

“If it’s not organic, people will not appreciate it,” says Ruhee Dosani on content creation and influencer marketing

Umang pointed out that though there has been a complete explosion in terms of creators, genres, and languages, the demand for content is actually “growing faster than the supply side because there is that need and desire to just spend time on entertainment, which is a massive category”.

The desire to be part of a conversation, the fear of missing out (FOMO), and the constant gratification demanded by millennials and Gen Z is unparalleled and partly explain the explosion of snackable content riding on the heels of Generation Connect or Gen C.

The homegrown disruption saw a new lease of life following the ban on the Chinese song, dance, lip-sync, and entertainment app TikTok. A new generation of creators and influencers rose to fill in the void, and how.

If Instagram spelt creator elitism, that is before it introduced Reels in a bid to capture the plebian that it once snubbed, or YouTube demanded a different kind of rigour and temper, a platform like Josh broke the barriers of language, cultural elitism, and entitlement to target Bharat with its enormous potential and originality.

As Viru said the “beauty” of Josh lies in its variety of content-enabled by the app’s tech creation tools and through their inbuilt artificial intelligence (AI) and machine learning (ML).

The result is a wide diversity of content across languages and ranging from music to food, to entertainment to lip-sync, to health, fitness, yoga, and even enabling conversations on social issues like dowry and getting Kerala police on the platform.

Embracing change, authenticity, and other key takeaways on content creation from Be YouNick and Niharika NM at TechSparks 2021

And this is perhaps how the Josh content is differentiated in its non-formulaic treatment of the short-video format. “I think we tend to stereotype a short video with music and dance and lip-sync but what we are seeing is this explosion. While there is the usual music, lip-sync and dancing, there’s food, fashion, comedy, stunts, astrology, divinity, mythology, cute, children, and even genres to the tune of pets,” explained Umang.

From hyperlocal life on the street to galvanising movements around mental health, poverty, or COVID-19 campaigns, and even the Independence Day Challenge that helped Josh win a Guinness Book of World Record for the maximum number of people coming and saluting the flag at one point of time — such is the variety on the platform.

The Josh “triangulated programme” offers the “World Famous” concept at the bottom tier and Viru and Umang have now taken this to 100+ cities. From picking raw talent from across cities, from malls to streets, and college campuses, Josh provides a platform that eventually culminates into a massive event where celebrities, as well as the country’s top creators, select the very best.

Those who are thus discovered enter the next level of the programme, the Josh Academy, which Umang and Viru tell us is now the largest online academy to train and groom over  1,50,000-2,00,000 creators, representing the length and breadth of Bharat.

The best then reach the top layer of the Agents of Josh programme, which is where the up and coming creators are brought up to speed with learnings on how to showcase themselves and build their profiles.

Perhaps, the biggest drive of Josh lies in its value proposition to bridge the digital divide among Bharat’s potential content disruptors and tastemakers.

As Viru said, “These people feel very shy going on other platforms like Instagram and YouTube. These people are creating content in the local language, and it appeals to the culture which belongs to the audience of that local language. So, we have done a lot of pilots and a lot of campaigns, right from Tinder and ecommerce to earphones and a lot of D2C brands. The whole idea about doing this exercise of monetisation was to complete the flywheel and ensure the value chain looks good.”

As Josh is a unicorn — the $1 billion valuation club — what’s the message to fellow entrepreneurs in the space?

Viru added a word of caution, “It’s good to be on this side of the unicorn but the message to fellow entrepreneurs who are on the other side of the unicorns is that every company that has become a unicorn has slogged for the last eight-nine years to be where they are today.”

Umang and Viru seconded each other when they vouched that an IPO is not an “opportunistic opportunity” for them, and that they would let it happen at the right time for the right scale and price.

As Josh marches on looking to disrupt the way people engage with content with their deeply personalised AI and ML-enabled interface coupled with augmented reality, they look forward to enable a new cohort of content disruptors, as Viru rightly pointed that the world of short videos is “infinite”, and can’t be pinned to a Coke, Pepsi, or organic tea.