We want to make the metaverse as mainstream as the internet: CoinDCX 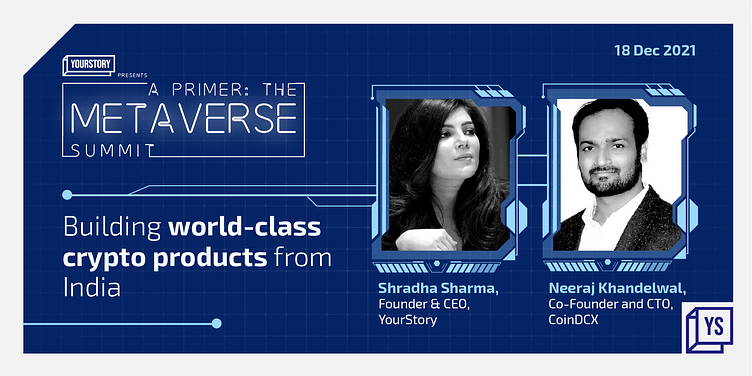 At YourStory’s launch event for The Metaverse Summit on Saturday, CoinDCX Co-founder Neeraj Khandelwal, talked about the first Indian crypto exchange to become a unicorn. He was in a fireside chat with Shradha Sharma, Founder and CEO, YourStory.

“Our objective is that India succeeds in building fantastic products on the metaverse. We want to make it as mainstream as the internet. Startups need to build products on it and that is how the metaverse will grow in India, said Neeraj Khandelwal, Co-founder and CTO,  ﻿CoinDCX﻿ at YourStory’s launch event for The Metaverse Summit on Saturday.

With metaverse starting to pick up momentum now, the industry has head room to scale and grow for the next 20 to 30 years, according to him.

CoinDCX became the first crypto startup to enter the unicorn club with a $90 million funding led by B Capital.

In his conversation with YourStory Founder and CEO Shradha Sharma, Neeraj spoke of some interesting trends being seen in the crypto ecosystem. Consumers are looking for products in the crypto and metaverse space not just in India but globally, he pointed out.

“In the last three months in India, collectively the crypto community has grown rapidly and all the exchanges have onboarded over 50 lakh Indians,” he said.

Growth in India is coming from the 18-35 year age group, who are keen on “new investing types and modes”. A Chainanalysis report states that investments in crypto grew from $200 million to over $40 billion during the past year.

However, Neeraj also urged people against building exchanges, as the market for exchanges is saturated. “I feel there are few sectors that will see significant growth.” He said that NFT (non-fungible token) is a segment that is fast growing while adding that the “real applications of NFTs” are just round the corner.

“This is because people are starting to invest in crypto, and people are actively exploring the end use cases of crypto. I believe the content and creator economy can be disrupted in the next few years with the use of NFTs.”

Neeraj believes that crypto fundamentally brings value in the internet space. The internet was about transferring and holding information, now it is about holding and transferring assets, and building an economy on top, he explained

“This can even be stock markets, if the regulations allow. Anything valuable can be represented in crypto. And with that in mind, there are a lot of startups possible. The size of assets globally is $400 trillion, and that can all be represented on crypto,” said the unicorn founder.

CoinDCX was started in 2018 as a crypto exchange and its growth has been rather significant since.

The year 2018 brought cryptocurrency startups and exchanges in India face to face with their biggest challenge - the Reserve Bank of India (RBI) issued a banking ban on crypto transactions. Several crypto startups had to shut shop or continue operations while navigating numerous roadblocks.

The Mumbai-based cryptocurrency startup, which incidentally began life in the same year, decided to fight the uphill battle and was among the few players that contested the central bank’s ban in court.

IIT Bombay alumnus Neeraj Khandelwal and Sumit Gupta had started CoinDCX with the idea of bringing different decentralised marketplaces and cryptocurrencies onto a single platform.  The duo focused on developing a product that allowed traders to swiftly trade cryptocurrency, with security and ease. The RBI ban resulted in several challenges including liquidity problems.

The importance of self-regulation

While the contents of the crypto bill are yet to be announced, the players in the market have always been self-regulated, he insisted.

“There are no ideas even on limits. We have come together on the BACC forum, where the industry has now been collaborating for the past 1.5 to 2 years, and we have been active on that front.” However, he conceded that the financial sector can be prone to “bad apples”, the onus is on the industry to work together to prevent and avoid frauds of any kind.

What next for CoinDCX

“While CoinDCX hasn’t ventured into the metaverse yet, our team is looking at the different kinds of products that can be built. We want to be the backbone of crypto and NFT in the metaverse,” said Neeraj.

The startup wants to enable and educate the masses and make the technology mainstream. “Once that is done, we will be able to build great products in the metaverse,” said Neeraj. The idea is to “wait and watch” and launch at the right time. On being asked to name the one thing that the team has done right, Neerah said “perseverance”.

“When we started in 2018 we had been building the exchange for close to eight months from my flat in Mumbai. And when the RBI put a banking ban, we couldn’t even start our business. What we knew is that several startups had shut down. But we believed in the long term value and we decided to continue. And in two years the Supreme Court reversed the ban. The idea is to be persistent in your approach and be on the path you began on,” he signed off.

If you’d like to join us on December 18, 2021 for the launch event, or register for one or more of the other key initiatives under YourStory’s new Blockchain Economy franchise, visit the website or use this form.