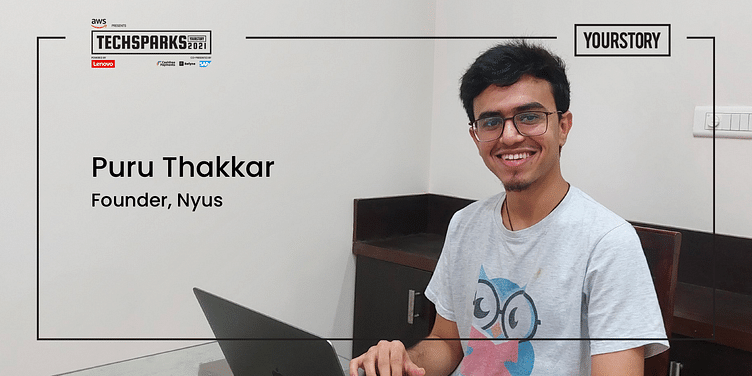 India has one of the largest populations of adolescents in the world – around 250 million. It’s no surprise that more and more brands are actively looking to cater to this segment. The media industry is not indifferent to this trend and ﻿Nyus﻿ Founder Puru Thakkar aims to disrupt this space by turning news items into memes.

Born and brought up in Vadodara, Gujarat, 20-year-old Puru is currently pursuing his Bachelor’s degree in Business Administration from GCEC (Global Centre of Entrepreneurship and Commerce) in Jaipur. Having learned coding at the age of 11, becoming an entrepreneur was his passion from an early age.

“After 12th, I skipped college and went to Bengaluru to try out internships. I wanted to see if I can make it directly into the startup world. But it didn’t work out that well. So I started with college,” he says.

During the pandemic induced lockdown, Puru happened to be surfing social news aggregation and discussion platform, Reddit. The US elections were underway and the feed was filled with Donald Trump memes. One reader commented on how he consumes news through memes and the seed for Nyus was thus planted in Puru’s head in mid-2020.

“Usually, when someone sees a meme, they have to google to find the news context for it. However, Nyus news memes make it fun along with added information in form of headline and a short summary,” Puru explains.

Shortlisted as YourStory’s 2021 Tech50 startup, Nyus competes with apps such as InShorts and DailyHunt, as well as memes-based messaging platforms Memechat and ShareChat. Its Android app has almost 20,000 downloads, 4,500 daily post views, and 600 weekly active users out of which 90 percent use the app over four times a week.

How does Nyus work?

Nyus’ target audience is in the age group of 13 to 24 years. It offers a free-to-use app on the Android ecosystem. The startup uses React Native, Node.js, and MongoDB (MERN) stack for the app and the server.

With the news app, users can read news, make memes and participate in discussions and share their opinions, making news a fun and social experience.

The news on the app is also targeted specifically towards news categories such as sex education, personal finance, career, psychology, technology, alongside daily news.

Tech30 is now Tech50. For the first time at TechSparks, YourStory presents 50 most promising Indian startups

Revenues and challenges ahead

The startup currently does not generate revenue, but is looking at sponsorships as a revenue source. The company is hoping to partner with teen-focussed brands and companies, and showcase their products via advertising or affiliate marketing to unlock more revenue potential.

The main challenge for a company in the content niche is content quality and quantity. Initially Nyus had around four to five posts only. However, Puru then decided to open the platform for other ‘memers’ or as they call them, “kreators”.

“We now post 17-20 articles a day and we’re working on increasing this number even further,” he adds.

For Puru, the long term goal is to expand to bigger markets where memes are even more prevalent, such as the US, as well as explore other categories where they can be used, such as in academia.

In the short term though, the startup is focussed on expanding its user base, experimenting with ads, generating revenue via sponsorships and exploring more revenue streams. It is also looking to build and grow a team in marketing, tech and content.

Although Nyus is at a very early stage in its lifecycle, it has managed to lay a foundation that should be able to attract the teen segment. Monetisation should only be a matter of time as the startup explores revenue streams such as affiliate advertising, sponsorships, paid content etc. It could also potentially partner with edtech companies to create educational content.

Nyus also has an important social aspect to it — making teens more aware about the goings-on in their country and across the world, which is important for the leaders of tomorrow. Considering all news is written mainly for the adult population, simplifying news and presenting it in a more interesting format is indeed an interesting idea.