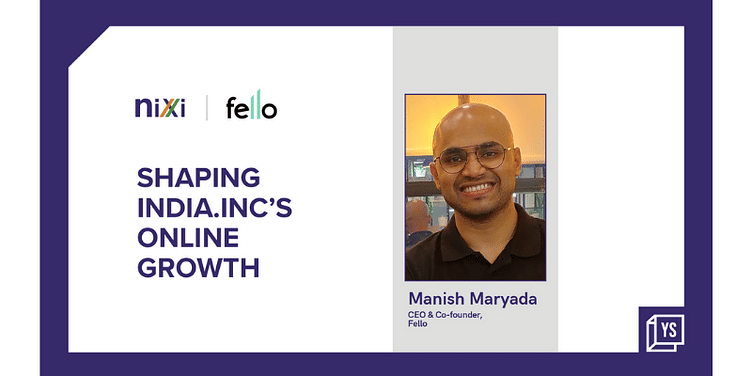 Fello co-founder Manish Maryada says that Gen Z and millennials choose to put their money into paid gaming apps rather than mutual funds because it’s exciting, which gave them the idea to start India’s first gaming-plus-savings platform.

﻿Fello﻿, a Bangalore-based fintech startup has brought the two elements together and introduced a unique model that enables users to save up, invest and play games. Founded by Manish Maryada and Shourya Lala, the startup aims to make finance fun by combing the elements of finance and gaming.

Whether it be the field of gaming or investments, the aim of the user is the same: to gain returns. So, Fello decided to bring the two elements together and allow the users to save, play and get returns more than a traditional savings bank account.

Manish says that their journey started with customer interviews where they spoke to 1000 Gen Z and millennial working individuals belonging to Tier-1 and Tier-2 cities. The biggest data point they found was that they didn’t have an inclination towards healthy financing options.

He says that a major data point in their research revealed that in spite of being vulnerable financially, a large chunk of millennials chose to use their money in online paid and fantasy gaming apps. They expect to get big returns while forgetting that they’re essentially gambling and can possibly lose all money they have used.

When asked why they aren’t using the same amount of money in investments, mutual funds and savings, the basic response was that the process was extremely boring with no immediate gratification. This gave them a eureka moment when they realised that gaming could excite Gen Z and millennials to get inclined towards healthy finance.

They started ideating on the company during the peak pandemic period, and though they started building the company in January 2021, the idea and work behind the product began only in October 2020, when the pandemic was at its peak. Manish says that talking to the customers before building the product was extremely important, but organising these interviews was a major challenge in the initial days.

Talking about the USP of the brand, Manish says that the psyche of millennials aged 21-25 is very different, and they expect everything to be fast and that they don’t want a learning curve associated with it. While traditional financial platforms make it easy for users to adopt finance by making the process easier, they couldn’t drive engagement into fintech products.

Manish says that they aim to drive engagement by adding a whole new dimension to the world of finance in the form of gaming. “We are not just trying to make finance easy and exciting, we are also trying to make it engaging,” he says.

Manish says that even though they are a mobile-first platform, they also have faint indicators that people are consuming their product in a significant manner on desktop as well. “We also saw several products in the same space opening up web applications as well. With the data points we have collected, we are planning to open up a web application two quarters from now,” he says.

Speaking about choosing the .in domain, Manish says that their target audience was always supposed to be the Indian millennials. He says, “We wanted to tap into Gen Z and young millennials, so going into .club or .live would have made it much more appealing. From my product management experience, I have learnt that having the .in domain will give you a significant edge in terms of trust and credibility.”

He adds that they tried out other extensions as well, but they received the best response to the .in domain, which led them to choose it for their website. In terms of trust and credibility, the .in domain has helped many startups like Fello build trust with their customers. Managed by the National Internet Exchange of India (NIXI), the .in and .Bharat domains are available in 22 Indian languages and have helped several young startups scale up considerably.

Looking forward to the future, Manish says that they want to capitalise on the entire influencer marketing network that’s out there. Another thing that they are focusing on, according to Manish, is that they want to utilise the power of digital marketing and push their product forward in the coming times.

The ‘Shaping India Inc's Online Growth’ series chronicles the journeys of startups and SMEs in India and how creating an online presence on the .in or .Bharat domain powered their success stories.