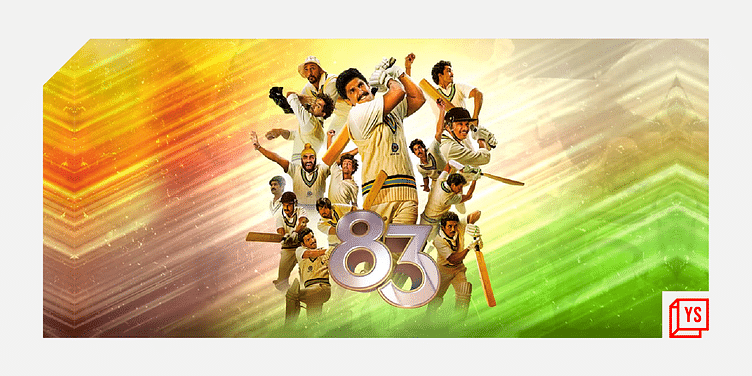 While Kapil Dev’s merry men scripted history on the cricketing pitch years ago, there are also insights their journey triggers for all those taking guard for entrepreneurial voyages.

The recent release of ‘83’ has brought back memories of one of India’s most epic triumphs. While Kapil Dev’s merry men scripted history on the cricketing pitch years ago, there are also insights their journey triggers for all those taking guard for entrepreneurial voyages.

This was the event which ‘started up’ India’s love affair with the limited overs game. Hence, for all those looking to startup their own ideas, here’s some fertile inspiration waiting to be borrowed from.

Whereas many things need to be bootstrapped in startup ventures, the excesses of cerebral activity are certainly not on that list. For it is only when the mind begins to knock things out of the park by reframing perspectives, everything truly begins to take shape.

1. The power of low expectations

India reached England that summer with zero expectations as to how far they would progress in the tournament. The evidence at the time seemed to suggest that as well. In two previous editions, India had only won one game-against the minnows of East Africa.

India had also been battered in successive away test series before the World Cup by both Pakistan and the West Indies. Thus, team morale would have been low as well.

The bookies gave the Indians little to no chance. It would be in the realms of fiction if India even got out of the group stage. But perhaps that element of having nothing to lose, and everything to gain; was the fuel which really powered India’s performance.

These days startups are leaning towards hyping their entries into markets, akin to the ‘hero entry’ typical in Indian cinema.

There are multiple press releases, television and podcast interviews, plus much fanfare, which accompany any startup taking its first steps. This puts immense pressure on the organisation to perform because it has already raised expectations.

Every move made by the company is subsequently scrutinised intensely by the media. But traveling ‘under the radar’ has immense benefits. It helps the team concentrate on their own actions and processes, rather than bother about public perception. And that brings a laser like focus to all activity, which can often lead to good results.

Though it was founded in a different era, the example of Infosys, one of India’s truly great startup stories, offers a great example along these lines. It was only much later in its history that this Indian IT giant began to engage with media and talk about itself. But by then, all the success servers had been properly installed to coin a software pun.

2. The leveraging of conditions

One factor often gets overlooked in the success story of 83. India’s seam attack, so often it’s weak link, became a different entity in the overcast swinging conditions of England.

Previously dismissed, rather cursorily, as ‘military medium’ or ‘fast spin’ by opposition players; in England the tendency to pitch the ball up, the focus on line and length and the inbuilt intent of making the batsman play every ball, all assumed entirely different proportions.

And for all the other riveting narratives going around, eventually it was India’s bowling attack which actually won us that tournament. As side after side, edged all those previous misconceptions into the waiting hands of the keeper or the slips.

Conditions can, many a time, play a major role in the fortunes of any venture. Climactic, political, economic and cultural, all have to be carefully studied before the launch of any new idea is to be made.

For example, the annual Indian monsoon season proves to be a catalyst for increased marketing activity by several categories. These could range from electronic water purifiers-like Aquaguard and Pureit, to remedies for cold and fevers like Vicks Vaporub and Coldarin. The relevance and need for these brands go up multifold during this period. It makes a lot of business sense to concentrate a larger part of one’s resources to exploit this upswing in interest.

Similarly, a whole other range of products and services become salient during summers and winters. A bevy of financial offerings find their fortunes propped during the last month of filing income tax returns.

To put it differently, being cognizant of the right conditions can surely make the showers of profit rain upon one’s business.

3. The flexibility of ‘bits and pieces’ talent

An interesting facet of the 1983 World Cup winning Indian team was the number of ‘bits and pieces’ men on board. This term alludes to those players who could do more than one thing with reasonable competence.

Of course, there was Kapil Dev, who was a genuine world-class allrounder. But on board were also Mohinder Amarnath, Sandeep Patil, and Kirti Azad (batsmen who could bowl) plus Roger Binny, Madan Lal, and Balwinder Sandhu (bowlers who could bat a bit). This endowed the team with enormous flexibility in crunch moments.

For a long time, the corporate world was seen as a domain for specialists. But, of late, the need for generalists has become more accentuated. This is even more so in the case of startups, where initially it is all about every member of the team, doing something more than her immediate job responsibility.

The early stories emerging from startups always revolve around how everyone did something other than what they were hired for. Actually, they even see that as particularly liberating, and part of the adrenaline rush one gets being part of an entrepreneurial outing.

These tales are always recounted with genuine nostalgia. They display the feeling of being part of something exciting.

“I had been in accounts for ten years, but there I was, trying to design flyers for our product”. “For the first few weeks, I ended up delivering our products. Had never done that before, but it taught me so much”. Needless to say, it increases the sense of ownership employees feel towards the overall cause. And that helps the business chalk up some impressive scores on the balance sheet.

4. The impetus of a ‘tipping point’

India had gotten off to a good start in the tournament, winning two on the trot. Then, they were successively humbled by the West Indies and Australia. Memories of the past began to resurface. The skeptics were rubbing their hands together in glee. And when India was down 17 for 5, in a must win match against Zimbabwe, the obituary writers began sharpening their quills. That was when Kapil Dev played one of the most astonishing innings in modern day cricket. His 175 not out, not only transformed the game and the tournament, it also turned around the perceptions of an entire nation about the possibilities of that form (the limited overs version) of the game.

Everything changed from that moment on. And while India’s first win in the group stage against the mighty West Indies and its subsequent win in the final a few days later, were also major triumphs; it was perhaps this single innings which decisively tipped a lot of things over.

A ‘tipping point’ is an event either planned or often unplanned, which comprehensively changes things. In the case of startups, it could be a milestone post which the fortunes of the company emphatically transform.

Needless to say, this is why think tanks at various places, try to consciously ‘engineer’ these important chronological landmarks. And while the pandemic has been detrimental to many organisations, it also has proved to be an unexpected shot in the arm for a few others.

All these companies have found that the realities of the pandemic have increased their relevance and interest. In a manner of speaking, whilst the pandemic was masking the entire world, it was also helping unmask the true potential of some startups.

5. The unshakeable belief of a leader

Very few people gave India any chance whatsoever in that tournament. Even the players themselves had no great expectations. It was almost like a holiday trip to England, a chance to destress from the pressures back home.

But one man had arrived in England with a seemingly impossible mission on his mind. That man was India’s young captain Kapil Dev. In later years, many of his team mates would recount how he was the only person on the team who had the faith, right from the very start.

And his strong conviction, despite the numerous odds, or the lack of any precedent, was the force that changed the cricketing story of a nation.

Faith and belief in an inspiring vision is often the biggest fuel that any startup moves on. Usually, and perhaps expectedly, this comes from the founder or the leader. Employees join the venture because at some level they are personally moved by that same vision too.

When things become uncertain, they actually buy into the belief of their captain, to get a sense of how the future will unfold. They try and decipher if that solid belief is wavering. The stronger the founder’s belief, the more likely the team is to brave the odds.

Steve Jobs was clear that Apple was not going to be another computer manufacturing company. He was looking to embark on a far more revolutionary path -- of making computers accessible to common folk and making computers a kind of ‘bicycle for the mind’ of the human race.

It was a movement to democratise computing in a sense. This lofty purpose brought many to Cupertino. It kept them engaged over many years. As they kept working to push the limits, and redefining the expectations of the domain. Till that effort finally bore fruit.

To conclude, revisiting India’s triumph in that summer of 83 might not just make for some wonderful cricketing nostalgia; it could also trigger some important ideas as startups negotiate the bouncy and swinging conditions of the market.

This exercise could leave Indian entrepreneurs with the rousing feeling; that if a few Indian heroes could make history then, they (the entrepreneurs) certainly can do the same now. It could also show them how a truly keen mind should never ever be stumped for ideas.