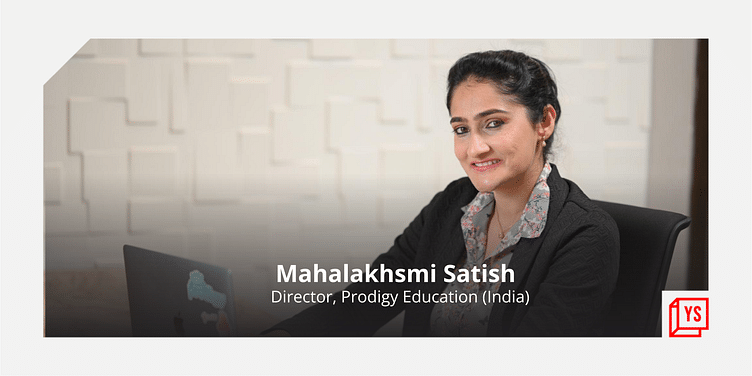 As education moved online in the last two years, edtech startups in India started coming up with innovative ideas by using advanced technologies to teach students. One of the few innovative ways was game-based learning.

While there are a few edtech startups in India that are offering game-based learning such as BYJU’S, Canada-based Prodigy Education, founded by Rohan Mahimker and Alex Peters, started offering this way back in 2011.

The startup uses a game-based learning app that teaches mathematics to students from grade one to eight.

Mahalakhsmi Satish, Director of ﻿Prodigy India﻿, tells YourStory, that when she had interviewed for the role of Country director at Prodigy India in 2018, she got her daughter to play Prodigy.

“I just wanted to know the company that was claiming to be so engaging for kids. I wanted to see what impact it has on my child. When I saw her getting hooked to the game, and when I saw her playing it for one and a half hours, I knew there was something in this and that made me take the jump,” shares Mahalakshmi.

The startup expanded to India in 2018, and it was the first expansion of the company. It has close to 50 members in India and has a client base of 500 schools.

What the company does?

The founders identified a typical problem out of their own personal experiences. Growing up, they were put through a lot of boring worksheets, which made learning monotonous and stressful.

With their love for gaming, the founders created a game-based learning course.

Speaking about India foray, Mahalakhsmi says: “We started testing the waters here by introducing the flagship game to schools, mainly the CBSE.”

“We started working with a handful of schools very closely and we had a great deal of learning and feedback, which really helped us tailor our product experience as well as the math content, because it had to be in line with what the teacher and student needs are here in India,” she adds.

“It is not just the students who were impacted. It was also the teachers. More importantly, parents as well as they are a crucial component in this whole ecosystem of driving learning at home,” says Mahalakshmi

According to the survey, 92 percent of parents were delighted that their kids could stay engaged with maths as a subject at home by doing prodigy assignments, rather than when they had to forcefully make the child practice maths.

“It was a phenomenon that most of the teachers and parents did not expect, but it was all happening because it was all within a game,” explains Mahalakshmi.

The startup is now focusing on launching English in India, which is already available in Canada.

“We are definitely looking at other subjects. So one of our immediate plans is to continue to expand our presence in the Indian market for the next few years, and one of our prime offerings will still continue to be the last game, because that's the most mature and most well established product in our portfolio,” explains Mahalakshmi.

“But we’re also equally excited about our other offerings like Prodigy English and Tutoring. These were recently launched in the North American market and in due course of time will be launched in India,” she adds.

In India, the startup launched a teacher app built by its Indian technology team to ensure accessibility across the country, whereas in Canada, it is web-based.

“As a North American product, it was built for the teachers and the classroom systems, UI, the interactivity was built for it,” explains Mahalakshmi.

For example, most of the teachers in North America use it in the classrooms, and they use it on desktops or laptops with the idea of it being a web-first approach.

“Here, we realised that our teachers are more mobile savvy. There is very little Internet access in schools, and so we need a teacher app that is built for an Android device. As most of the teachers use phones, we had to build an exclusive feature for India,” said Mahalakshmi

Prodigy built its content to suit the needs of the Indian education system catering to CBSE and ICSE boards.

As of now, the product only accommodates English as the medium of instruction. India has much larger potential for English medium products before the market gets saturated, explains Mahalakshmi. “With this big opportunity, we did not really feel the need to go vernacular at the moment,” she adds.

“We would first want to see what's the adoption and how quickly we can penetrate the market with English medium as most of the education even in rural areas is slowly moving towards English medium,” she adds.

The startup does not plan to add other vernacular languages to its platform immediately as it believes it still has a large portion of the English medium population to cover.

“We still have a long way to go in catering to English medium schools. But I think, at some point, we will have to start thinking about how and when we go more local, so that we can expand into other interior regions as well and have our presence there,” she adds.

India has close to over 250 million students enrolled, with a large portion attending government schools.

However, Prodigy does not cater to this crowd and caters to the private school going crowd. This is still a sizable number of users for the company to enter. Hence, India became its first choice of country to expand.

Secondly, Mahalakshmi explains that there are countries with similar type of education systems, so an expansion into the country would act as an added advantage to extend its footprint across other developing countries.

The company started off building its presence mainly in Karnataka and later expanded its presence to Maharashtra and Gujarat. This year, it is planning to expand to northern part of the country as well as Tamil Nadu and Kerala.

The first school the company onboarded in India was a Delhi-based CBSE school. It is also seeing a lot of adoption from tier two cities.

“We see a lot of interest now as we take it to premier schools in most of the tier two suburbs and outskirts of these regions,” adds Mahalakshmi.

The only criteria that Prodigy looks for in schools is to have a level of internet penetration and adoption of technology.

“This has helped us be able to break that barrier of tier one and go beyond that and look at schools and other regions as well outside of the metros and the bigger cities,” says Mahalakshmi.

It is also used in smaller pockets of Maharashtra like Baramati.

According to a report published by MarketsandMarkets, the global game-based learning market size is expected to grow from $11.0 billion in 2021 to $29.7 billion by 2026, at a Compound Annual Growth Rate (CAGR) of 21.9 percent during the forecast period.

Prodigy’s subscription starts from Rs 1,500 per student, and schools can pay a bulk amount depending on the number of students they enrol.

In January 2021, the starup raised Series B funding of $125 million from TPG Growth and Canadian Business Growth Fund. The total funding raised by the company till date is $200 million.

At present, Prodigy is competing against a few heavyweights in the edtech space such as BYJU’S, Cuemath, and Countingwell when it comes to math learning.

Applications now open for Innovent 4.0 Top 10, a hunt for the most promising Industry 4.0 startups in India