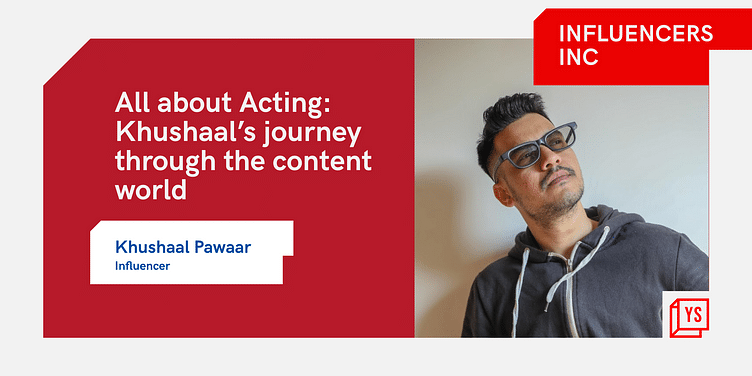 In a recent conversation with YourStory’s Influencers Inc, Khushaal Pawaar, an actor turned content creator, reveals why he started making videos amid the pandemic and shares his plans for the future.

The pandemic locked people in their homes, from where many of them made their way to social media.

One such person is Khushaal Pawaar, who decided to make a move from Bollywood to the content creation world. He continued to focus on his true passion, acting, while creating relatable videos on the internet to keep the audience entertained amid the pandemic.

Having worked with B-town celebrities such as Salman Khan, Shahid Kapoor, and others, Khuhsaal brings an actor’s perspective to his content game and has garnered a follower base of 171K on Instagram.

Speaking about his journey, Khushaal says there was not much shooting or auditioning happening in the industry during the pandemic. He started creating and putting out content in an attempt to brush up his acting skills each day.

“The main reason was to actually get feedback because everyone at home will tell you that you’re good, but when you put your content out there, you’ll know if you’re going the right way,” he says.

Khushaal did not intend on doing mainstream comedy, and focused on creating content on topics or situations relatable to common people. These ended up “being funny for his audience as situational comedy”.

“I pick up things from real life and as an actor it helps me,” he says, adding that comedy is something that would work on Instagram or YouTube because it is what the audience wants.

Speaking about the process of creating content, Khushaal says he makes videos randomly, whenever he “gets an idea”. He doesn’t plan in advance or fix a schedule as creating content “comes very naturally” to him.

“As an actor, I always believed in something called impulse so if anything comes to me instinctively, I do it,” he shares.

Khushaal does a lot of advertisements and auditions, which bring him money. Going forward, he wishes to focus heavily on acting, his true passion. “My dream has always been Bollywood. I wanted to act every day, which is why I took up content creation,” he says.

The content creator also wants to focus on his YouTube channel for short series and videos, and is also collaborating with other YouTubers and creators. “I want to tell stories on YouTube,” he signs off.