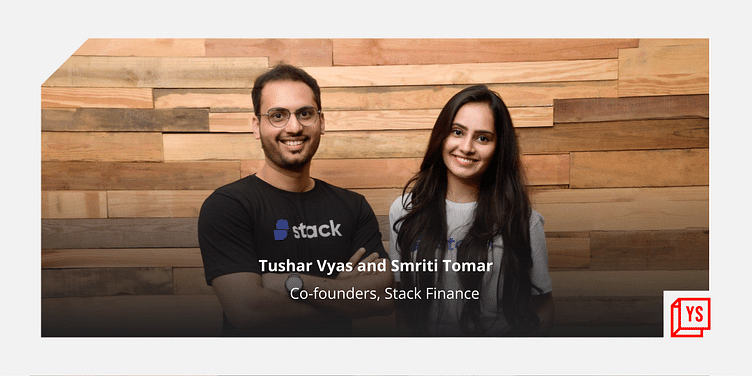 Stack, founded in 2021 by Smriti Tomar and Tushar Vyas, offers tailored investment strategies for users based on their risk appetites and goals.

With a firsthand experience of working at Citibank for over a year, NIT-Bhopal graduate Smriti Tomar acknowledged something that she already knew — it takes a lot of time to innovate in big corporations.

“There’s a full-fledged protocol that they have to follow,” Smriti explains.

Since her teens, she had always been intrigued by finance and investing domains. She also realised that most of her friends found investing to be a complicated process as tracking portfolios and market movements regularly, as well as managing investments was a demanding process.

So, the 25-year-old decided to start up to tackle this problem for people her age who may not be able to take out time by solving the lack of knowledge and time in the investing space. Founded in 2021, Bengaluru-headquartered Stack develops and builds products to improve personal finance experiences.

“While we knew we needed to start early, we didn’t know how to start and where to start,” Smriti, Founder and CEO of Stack, tells YourStory.

What does Stack do?

The startup came out with an app that automates investing for everyday retail investors.

“It led us to think of a solution or a product that we would love to use — something that takes care of our entire investing hassle, with minimal manual efforts involved,” she says.

The app offers tailored investment strategies for its users–retail investors–with globally diversified portfolios, based on their risk appetites and goals.

Explaining with an analogy, Smriti says that the users are served everything on the plate, and they can choose what kind of diet they want to have. Stack does this for investing.

The startup offers users automated investing strategies and portfolios based on their risk appetites, goals, and the amount of money they want to invest.

The team launched the app in December 2021, after operating it in closed-beta mode throughout November 2021.

“Most users have onboarded due to word of mouth, as well as referral and reward programmes,” says Smriti. Only around 25 percent of the users have signed up because of digital marketing, which has been passive.

While users of all ages can use the app, it mostly targets millennials.

“We are essentially riding on this wave of exploding retail investor participation right now in India, which is mostly due to young millennials and Gen Z,” Smriti explains, adding, “So, we want to tap onto this audience and leverage their loyalty.”

Many of the startup’s current users happen to be first-time investors.

Stack has a considerable user base from Tier-II and III cities. This is another area that the startup is looking to leverage.

With fresh investors and fresh markets to tap into, Smriti says educating the users is also crucial. Only 27 percent of Indians are financially literate, according to a survey by the National Centre for Financial Education

“We believe that through better efforts into financial awareness and education, we can also improve this number,” she adds.

The startup believes in communicating directly to users. Upon signing up, users are presented with a video from the founder to help them understand how the app works — which, Smriti says, helps them build a connection.

The app also helps set goals and strategies. It suggests several goals according to user requirements – such as saving for vacation, education, house, retirement etc. It also enables users to create custom stacks.

The app also presents users with a set of questions, which helps the startup detect their time horizon and personality, based on their income or risk appetite.

It also verifies details about their age, source of income, occupation, etc by partnering with two mutual fund houses.

With a set target amount, Stack creates a portfolio of different asset classes – which could be equity, debt, or gold. It plans to add and diversify into cryptocurrencies soon.

The users can decide how often they want to invest.

Once the onboarding process is completed, the users can link their UPI or net banking accounts to the app to start investing.

The startup also keeps adjusting the portfolio based on external developments, for example, how the market is performing. It also nudges the users, motivating them to not miss out on their regular investments, as well as rewarding them.

Stack also gives users a brief explainer on the logic behind the portfolio for them and how it works.

“We don't want to be a black box,” says Smriti. “That awareness is helping us spread the word as well.”

“We do not charge any fees or anything else from the users,” she notes, adding, “The ultimate goal is to focus on user acquisition and increase the assets under management (AUM) through their investment.”.

The startup competes with Scripbox and  INDmoney for its advisory and portfolio management services. It adds a layer of ‘robo advisory’ — automated investments based on the user's finances — on platforms including Zerodha, smallcase, and Groww.

With a vast young population in the country, India is a large market for Stack, majority of whose users are young, first-time investors. As per Statista, the country has an average age of 28.4, which serves well for the fintech startup.

As per IBEF, the country’s financial literacy rate among its young and adult population has been growing in the last two years, due to various factors including the recent advancement in technology and media coverage.

“Retail participation in the Indian stock market has increased dramatically over the last two years, as more first-time investors have shifted their focus from traditional means of investing and entered the stock market in search of higher returns,” IBEF says.

Over time, the company plans to be a financial broker, creating its own funds and shifting to AUM. After it gets an Asset Management Company (AMC) licence, it plans to earn through a management fee and expense ratio based on these funds, which would be a replica of the funds it recommends to its users.