Mission e-governance: Unlocking the power of AI, ML, and more to build a smart India for the next generation 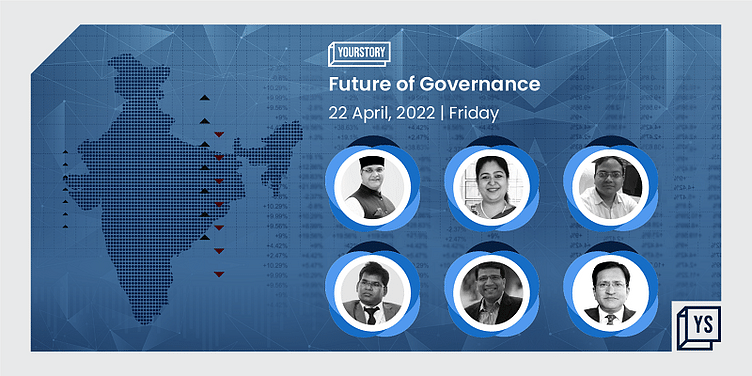 From new-age technological tools to deliver governance, from reengineering to reimagining products for greater citizen satisfaction, a look at the key takeaways from YourStory’s ‘Future of Governance’ 2022 virtual conference.

As the world came to a halt owing to the COVID-19 pandemic, which disrupted lives and livelihoods in its wake, it accelerated the need for greater and deeper digitisation that could penetrate hitherto untapped pockets and reach out to the farthest and the remotest. From economy to education, from healthcare to healing and happiness, from delivery of essential goods and services to the very modus operandi of the government itself, India too responded to the pressing reality that demanded a more significant mobilisation of technology — especially the gamut of intuitive, intelligent and integrated technologies, collectively termed as ‘New Technologies’ — to up, scale and rebuild governance. To implement change and impact a population of 1.4 billion; to touch the lives of the elderly who earlier felt left out of the fold of digital governance, to touch the lives of the mobile-first generation, and bring the rural and the underserved among its fold.

Since the National e-Governance Plan (NeGP) launched in 2006, the Indian government has pivoted several e-governance initiatives such as Digital India, Aadhaar, MyGov, and Mobile Sewa DigiLocker, among others. With its cohort of digital programmes, the Government of India's flagship 'Digital India' mission (2015) is geared towards enabling its vision of ‘minimum government, maximum governance’.

To weigh in on the evolving paradigm of e-governance — loosely defined as the use of information and communications technology (ICTs) to deliver government services to citizens and businesses with greater efficiency and efficacy — veteran government delegates and key industry leaders joined YourStory’s ‘Future of Governance’ virtual conference on April 22, 2022, to share their vision about India’s roadmap to revolutionise governance.

The sessions delved deep into the way ahead for the rapid adoption of digital means to serve public ends and the unique set of challenges and advantages that India has. As New Technologies such as blockchain, artificial intelligence (AI), robotics, augmented reality (AR), and machine learning (ML) seem to be the answer to a bigger and better future, one that promises enhanced delivery of public services such as education, health, social security, and transport with ease and efficacy, experts shared some critical perspectives aligned with the country embracing the burgeoning digital curve. Here’s what to look forward to in terms of new ideas and innovations to alter the digital India landscape.

Towards a technological roadmap: A look at the key takeaways at the Future of Governance

The digital-only event — the YourStory Future of Governance conference — unboxed some crucial conversations around the government’s digitisation drive. Held on April 22, 2022, the all-immersive sessions also spotlighted the success stories of technology-enabled governance initiatives and innovations that are already driving impact on the ground.

The opening session titled ‘Future of e-Governance with Innovative Ideas’ was graced by Ashish Srivastava, Director, Information Technology Development Agency, Government of Uttarakhand, and Mugdha Sinha, Secretary, Department of Science & Technology, Government of Rajasthan. The session moderated by Chahat Jain, Senior Anchor, YourStory, had the speakers discuss some key agendas regarding what technology means for the current state of Indian governance. Both agreed how technology is a crucial tool to deliver governance and is increasingly and intrinsically being linked with metrics of citizen participation, engagement, and satisfaction.

It is challenging to see feedback given by citizens manually, pointed out Ashish, highlighting the significance of tools such as ML that enable higher authorities to check feedback seamlessly.

Mugdha explained, “Technology is not just information, and it is a process, which is reengineering how we learn and reimagining how products can ease the quality of life.”

Seconding how there’s hardly anything in the government and governing system that cannot do without technology, Mugdha emphasised how there are a few things left in the public interface where technology is not used as a mirror.

Next up was a session titled ‘Simplifying Citizen Services with the use of New Age Technology’, graced by Golok Kumar Simli, Chief Technology Officer (Passport Seva), Ministry of External Affairs, Government of India. The session was moderated by Rekha Balakrishnan, Lead Editor, HerStory, YourStory.

From celebrating the one-billion vaccination milestone accelerated through the CoWIN app, to several flagship programs under the ‘Digital India’ initiative, technology is already reshaping the Indian public sector. With the coronavirus pandemic acting as a catalyst for rapid and smooth adoption of digital models of citizen-friendly services, good governance, it seems, is a click away.

“If you have a smartphone, you can have a passport. The idea was how do we penetrate more and make it more accessible,” said Golok Kumar.

An award-winning government technology leader, Golok Kumar is a pioneer in e-governance. Having been associated with India's 'National eGovernance Plan' from the conceptualisation stage during 2005-06, his efforts towards digital transformation within public sectors are widely hailed. He has implemented the 'Passport Seva Programme' —  one of India’s most successful e-governance programmes — for the smooth delivery of passport services at the doorstep of every citizen in India and the Indian diaspora globally.

“It’s ultimately about the citizens and the masses, and if they aren’t happy, it is meaningless,” he added, sharing his thoughts on the vision behind India’s roadmap to digital transformation.

The Union Finance Minister recently announced the launch of the ‘Ease of Doing Business 2.0’, calling forth an active involvement of the states, digitisation of manual processes and integration of the central and the state-level systems through IT (information technology) bridges, single-point access for all citizen-centric services, and much more.

“We are now competing with modern economies like Western Europe and America. Looking towards further improving it so that we become the most favoured destination for the business,” said Sanjay Kumar at the Future of Governance digital conference.

Sanjay Kumar spoke about the main challenges that lie ahead when it comes to individual states and solving those problems by facilitating ease of doing business through effective interventions and new reforms aimed at simplifying processes.

"MP is all set to be the first state to introduce MBBS in Hindi, not to replace English but to give greater support to Hindi-medium students," said Vishvas Kailash, drawing attention to technology pivoting vernacular mediums of learning.

"MP is the first and the only state to establish a ‘Medical Knowledge Sharing Mission’, bringing the world's best to our medical students," he added.

The concluding session titled ‘Atmanirbhar Bharat and sustainable infrastructure: Building the future for next generation’ was deliberated upon by Raghav Chandra, Founder and CEO (chief executive officer), CUNSULT, and moderated by Priya Sheth, Senior Anchor, YourStory.

“We have the largest number of unicorns, and the speed at which unicorns are growing is huge. This reflects the energy technology is taking to drive investment,” said Raghav. “The need of the hour with our increasing population is to provide equity and excess resources to raise the per capita income levels. We need to increase productivity and competitiveness,” he added.

The session provided vital insights into the larger vision of building a sustainable and smarter India where new technologies can be tapped to boost resiliency and enable a sustainable infrastructure, especially in the post-COVID era.