How a 23-year-old created a content marketplace earning $8M in annual revenue: the story of Pepper’s Anirudh Singla 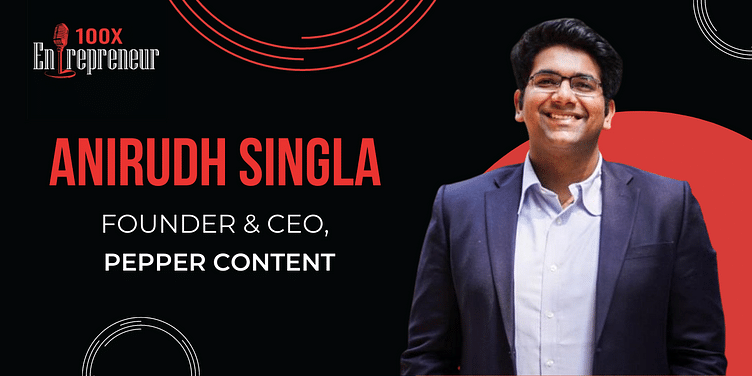 Anirudh Singla launched content marketplace Pepper while still in his engineering college. In this week’s 100X Entrepreneur Podcast, he delves into his journey.

In 2017, Anirudh Singla was still in his second year of engineering when he decided to take up freelancing and content creation to fund his graduation all by himself. Realising the potential for content creators, Anirudh then decided launch Pepper - a content marketplace and SAS tools platform.

In a conversation with Siddhartha Ahluwalia, Founder and Host of 100x Entrepreneur podcast, Anirudh shares his journey of building ﻿Pepper Content﻿, and growing it at scale.

Growing up, Anirudh had seen his father, a businessman in the steel industry, build a $100 million business from scratch.

“I have seen him reach that kind of scale and going through ups and downs,” he says, adding he himself had a very entrepreneurial nature from the very start and he worked hard to get into BITS Pilani. Once in the prestigious college, he says he realised there were “900 people who were equally or smarter,” and he was compelled to figure out the one good thing in which he stood out. For Anirudh, it was writing.

He then started to look for media houses to intern. Being an engineering undergrad, many declined his request, but several cold emails later, one finally got a response - from YourStory.

“At this time, I was trying to finance my own education at BITS. And the goal was to earn 2.5 lakhs in two months. I had never ever earned a single penny in life. I also started freelancing for a lot of US-based job talent market-based platforms like Fiverr, ﻿Upwork.com﻿, ﻿Chegg﻿, and so on. Now, most of the opportunities you had to build were only available in US timings, so I used to wake up at 5 am, freelance till 9 am, and 9 am to 5 pm I worked at YourStory, and 6 pm to 12 am, I again freelanced,” he explains.

After doing this for two consecutive months, he ended up earning 2.53 lakhs, and learned two things in life - persistence compounds, and, as a country, there’s just so much talent out there.

Surprised that there was no talent marketplace in the country despite a massive population of creative people, Anirudh went back to college, and set about building content marketplace platform Pepper with the help of a few friends.

According to Anirudh, to date, his company has worked with about 2500 brands. He adds that it engages with 550 to 600 customers on an active basis now. These clients include over 70 Indian unicorns as well as large enterprises such as Adani, Amazon, Google, HUL, P&G, and HDFC.

“We have a very fundamental belief, that every company today is a content company. Every business is heavily investing in content marketing. So for us, the most exciting part is that literally, every customer is a prospective customer as well,” Anirudh adds.

Pepper offers managed services for brands at scale, along with its software stack that enables companies to be able to manage all forms of content production, distribution, and analytics from one platform itself.

On Pepper’s SaaS product contribution to the company’s revenue, Anirudh says, “I think SaaS is still early on, about 15-20 percent, and growing really fast in the overall scheme of things. Marketplace and SaaS together reinforce and make each other 10x more powerful. That’s how we look at our business.”

Today, Pepper is backed by Lightspeed India Partners and Titan Capitals along with YourStory Founder and CEO Shradha Sharma- who was among the first ones to invest in the company.

12:46 – Reaching out to 80+ VCs and Angel Investors while raising their 1st round

24:20 – Need to focus on a SaaS-based approach for Content

26:15 – “Hustle doesn’t scale. At the same time, what scales is the mindset of thinking big enough!”

28:25 – “Not building a family, but instead building a high-quality sports team.”