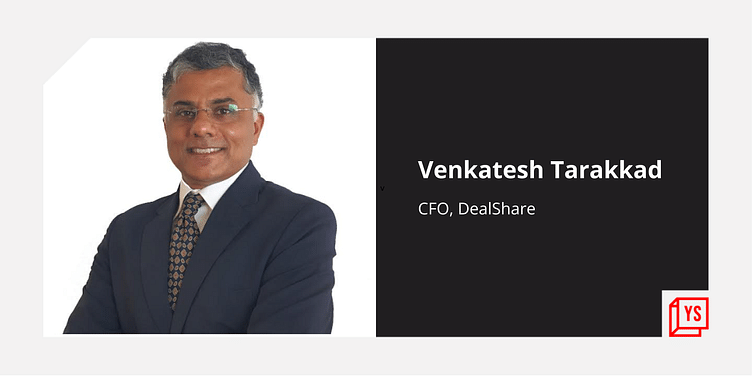 YourStory presents daily news roundup from the Indian startup ecosystem and beyond. Here's the roundup for Monday, May 23, 2022.

Strengthening its senior leadership team, ﻿DealShare﻿, social commerce unicorn, on Monday announced the appointment of Venkatesh Tarakkad as Chief Financial Officer. Venkatesh brings over 25 years of experience in enabling businesses to scale quickly, increasing efficiency, and improving profitability. He will be in charge of DealShare's Finance function as well as its supply chain function.

Venkatesh has extensive experience in the Retail, FMCG, and ecommerce sectors. In his previous roles, he was the CFO of Ecom Express, TCNS Clothing and Metro Cash & Carry, India. He has also worked for companies like E&Y and Coca-Cola. Venkatesh will join the leadership team and play a vital role in propelling the company towards profitability and growth.

DealShare is a social ecommerce company focused on catering to the 500 million new-to-internet and value-seeking users. It claims to offer high-quality, low-priced essentials coupled with a gamified, fun-filled, and virality-driven shopping experience, making it easy for first-time internet users to experience online shopping.

Maneesh Sharma, previously GitHub General Manager for India, has joined ﻿LambdaTest﻿, a test orchestration, and execution platform, as its Chief Operating Officer. Maneesh will lead all the go-to-market functions in the company.

Maneesh, who has over 22 years of experience, was leading GitHub India’s growth and operations until recently. Under his leadership, India was the fastest-growing market at GitHub, growing to more than eight million developers along with a strong customer base. He has also held leadership positions at top technology companies including Adobe and SAP and was also the Java Ambassador at Sun Microsystems, where he was driving developer engagement across APAC, according to a statement.

“With every organisation becoming a software company, customer experience is at the heart of every digital product and service. Like security, testing is also increasingly shifting left as both developers and testers build reliable and consistent product experiences. The pace of software development demands a robust and scalable testing infrastructure for organizations,” said Maneesh Sharma, COO, LambdaTest.

LambdaTest’s platform is used by over one million developers and testers globally. The company has run more than 100 million tests since its inception and has grown its business by 300 percent in the last year. Using the company’s offerings, its customers were able to achieve 95 percent quicker time-to-market, increase their release productivity by 62 percent and identify 67 percent of issues prior to launch.

Branch appoints Sumith Sumithran as Head of People for India

Branch International, a personal finance app, announced the appointment of Sumith Sumithran as Head of People for India operation. In this new role, Sumith will be responsible for driving the people management strategy, covering talent acquisition, talent management, learning and development, performance management and diversity and inclusion.

With over 14 years of HR experience, Sumith has held HR leadership positions in ﻿CleverTap﻿ and Fractal Analytics, and had stints with ICICI Prudential Life Insurance and Reliance Communications.

Home buying platform Blox has said it has acquired real estate sales and marketing company Plinthstone REMA. The new acquisition will be added to Blox as an extension of the brand’s portfolio and will be known as Blox Exclusive, according to a statement.

The platform says it also provides instant live site visits and a dedicated relationship manager for every home buyer, while the online transaction capability of the platform leads to customer convenience and an experience like no other.

Blox also claims to be the only platform that allows buyers to pay and book properties online, allowing for a frictionless customer journey.

Plinthstone was founded in January 2021 as a multi-speciality realty advisory company.

Plinthstone’s team that is servicing these projects will now be integrated into Blox.

As part of the agreement, Chola will be the preferred financier for customers purchasing the used vehicles from CarWale abSure’s dealers. Chola will customise its products and offerings to suit the needs of these customers.

Ather Energy to expand its retail presence in Kerala

Ather Energy, an electric scooter manufacturer, is all set to expand its retail presence in Kerala by opening eight new experience centres in Tier-II and III cities of Kerala such as Kollam, Trichur, Palakkad, Kannur, Kasaragod, Alappuzha, Kottayam, and Pathanamthitta.

Ather Energy will have a total of thirteen retail stores across the state, after opening outlets in Kochi, Kozhikode, Trivandrum, Tirur, and Malappuram. The rapid retail expansion in Kerala is driven by the phenomenal response to the Ather 450X and 450 Plus electric scooters, according to a statement.

Ather Energy claims to have seen a surge in consumer interest and encouraging demand nearly 12X since the opening of the first Ather Space in Kerala last year.

Ather will be opening up in these cities in a staggered manner by Q2 2022 and will begin by setting up test rides to let consumers experience the vehicle. Ather has also been talking to prospective retail partners in these markets and has already begun locating spaces to set up its fast EV charging network, Ather Grid.

Ather Energy has installed 40+ Ather Grid points at several critical points across Kerala. The company plans to add 8-10 more charging points in each of these eight new cities to strengthen its charging grid network to provide smooth and hassle-free rides to EV owners in the state.

Actis, a global investor in sustainable infrastructure, has acquired Rx Propellant, a platform focused on providing real estate solutions (R&D labs and associated facilities) to tenants in the life sciences and related sectors in India.

In the initial phase, Actis is looking to invest $200 million into a buy and build programme targeting both greenfield and brownfield assets with an emphasis on sustainability. Rx Propellant will focus on thriving life sciences clusters in Hyderabad, Bengaluru, and Mumbai.

Actis recently announced it has completed fundraising for Actis Asia Real Estate Fund 2. The $700 million total represents LP fund and co-investment commitments, with additional co-investment opportunities expected to deliver up to $1 billion of investable capital during the life of the fund.

The Fund will allocate capital to invest in real estate that enables the New Economy, focusing on Actis’ key geographies of China, Korea, India, South-East Asia, and Vietnam.