This D2C brand was started to bring innovation, comfort to men’s innerwear segment 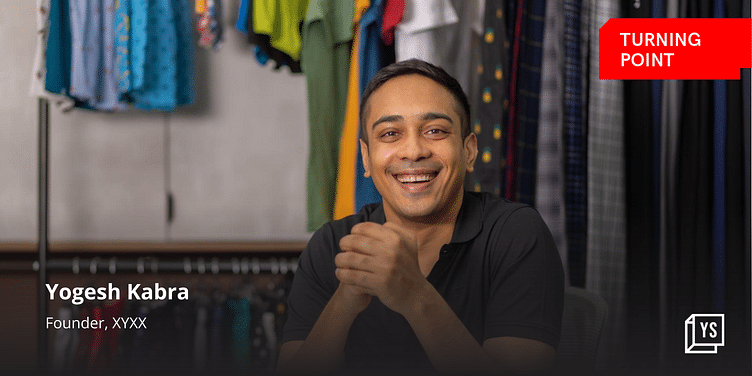 In the last six months, the brand has expanded to more than 14,000 multi-brand outlets, witnessing a 300% growth year-on-year during FY22 compared to the last fiscal year.

With this round, the startup has so far raised Rs 135 crore.

After completing his MBA in the US, Yogesh returned to India in 2015 and started working at his father’s textile business. A few months later, Yogesh realised that although he wanted to work in the textile industry, he wanted to do something on his own.

“I had just returned from the US and went to buy innerwear for myself. The lack of options, the staid choices, and the standard colour palette was something that struck me deeply. For a piece of clothing that you wear every day, the lack of innovation in the industry was really stark. It was a gap that needed to be filled, and that’s how XYXX was born,” Yogesh recalls.

The world’s a stage for India's bold, new D2C brands

“The innerwear market with its basic and merely functional offering did lack product innovation. We wanted to create something that had its roots in comfort and functionality, but was also fun and playful and made you feel good from within,” explains Yogesh.

XYXX Apparel claims to use micromodal fabric for its innerwear. The fabric is extracted from pulp beechwood trees in Austria, which is anti-microbial and therefore, the best natural fabric for the hot and humid Indian weather.

“The men's innerwear and comfortwear industry in India is a $3 billion opportunity in the mid-premium segment. But it has seen limited innovation on fabric, cuts or designs in the last decade or so from the leading incumbents,” said Yash Kela, Founder, Singularity Growth Opportunities Fund, at the time of the funding.

“"XYXX's rapid growth over the last year shows its understanding of customers’ needs, design prowess, and unique value proposition that works across channels,” he added.

The startup was badly hit during the pandemic where most stores shut down, which was XYXX’s main channel of distribution. However, since then, the startup claims to have had a complete turnaround.

“We have consistently checked and excelled at metrics like burn rate, capital efficiency, and gross margins, among others. We have already achieved profitability at the Contribution Margin 2 level and have been looking at a double-digit margin for the past two quarters. We are well on track to become operationally profitable by the end of the financial year,” says Yogesh.

XYXX will use the latest fundraise for geographic expansion and bolstering its existing markets with a fresh influx of products across innerwear, comfort wear, and activewear.

The Surat-based brand aims to triple its retail network in the next six months with its foray into modern retail, large format stores, and exclusive brand stores (EBO) alongside its aggressive MBO expansion.

“Our short-term goals of establishing a robust retail footprint in the country is in line with our long-term goals of achieving market leader status in the category. From a product portfolio front, we are also looking at expanding our offering with winter wear rooted in comfort, as well as expanding existing categories in innerwear, loungewear, and athleisure,” says Yogesh.