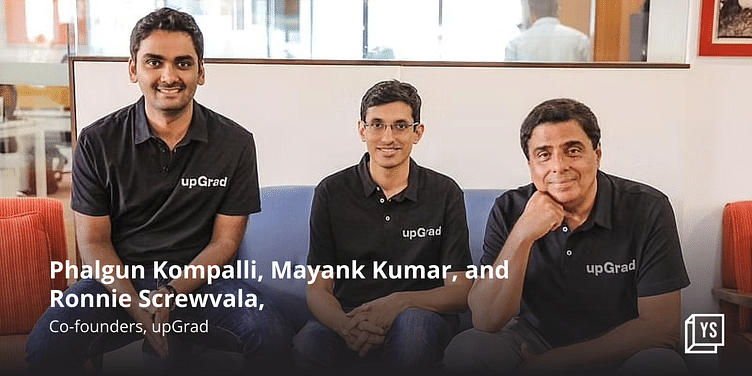 Amid the flux in the edtech market, what seems to be working in upGrad’s favour is the greenfield segment it’s present in—upskilling and reskilling—catering to working and mid-career professionals. Can the edtech unicorn back it up with sustainable strategies for long-term growth and profitability?

At a time when the edtech sector is grappling with layoffs and funding challenges, Ronnie Screwvala-led ﻿upGrad﻿ has raised a giant scoop of funding and also managed to close acquisition deals.

In August this year, upGrad raised $210 million from ETS Global, Bodhi Tree, Singapore’s Kaizen Management Advisors, and the family offices of Bharti Airtel, Narotam Sekhsaria, and Lakshmi Mittal’s Artian Investments, along with existing investors Temasek, IFC, and IIFL. In the same month, it also acquired Exampur, an online learning startup for competitive examinations, for an undisclosed amount in a cash-and-share swap deal.

What’s interesting to note is that the frenzied expectations of the past have given way to a more pragmatic approach from investors with a focus on the long term.

Mayank Kumar, Co-founder of upGrad, which is valued at $2.25 billion, tells YourStory, “Earlier, the conversation with investors used to be more about: how large is the market size, how big is the TAM, how fast are you growing? Today, the conversation is a lot more about: are you profitable, will you be profitable, how much cash will you generate over a period of time?”

In contrast, edtech unicorn ﻿BYJU'S﻿ funding announcements made over the last year have not fructified. In March, BYJU’S had announced raising $800 million (around Rs 6,300 crore then) in a fresh round of funding, at a valuation of $22 billion. But a large part of the money from Los Angeles-based Sumeru Ventures hasn’t landed yet. This is on top of the Rs 1,200 crore (about $160 million then) promised by Oxshott Capital in September last year, which has not come in yet, according to a report by The Morning Context.

The edtech sector, on the whole, seems to have lost its mojo after the pandemic high. Apart from funding challenges, the sector has also witnessed massive layoffs in the last few months, across companies such as BYJU’S-owned WhiteHat Jr, Unacademy, Vedantu, and Lido Learning.

In the midst of this flux, what’s helping upGrad stay on the radar of investors? Analysts believe the reasons are the segment that the company operates in—reskilling and upskilling—and its niche target audience, who are outside the traditional K-12 ambit.

While the growth that K-12 companies saw during the pandemic is slowing down, professional and upskilling courses have not witnessed a downtrend, according to industry observers. This segment continues to grow and is a frontrunner for investments in edtech, they say. upGrad’s competitors such as Newton School, Scaler, and Masai School too have raised funding in recent times.

“upGrad targets working professionals and mid-career people who’re looking at reskilling and upskilling. For some time now it is going to be greenfield because there’s a lot of sector-reset happening. Reskilling has become a common notion. People are more cognisant of the fact that one’s skills have an expiry date,” says Saher Mahmood, Principal Analyst, Gartner.

ETS Strategic Capital, one of upGrad’s investors, is buoyant about the “burgeoning” segment of digital reskilling and upskilling in India. Ralph Taylor-Smith, Managing Director, ETS Strategic Capital, says, “We are excited to invest in and partner with upGrad to help accelerate its growth. India continues to be a priority country for ETS.”

The company targets people in the 18-60 age group with a range of programmes—from degree programmes and job guarantee programmes to skilling and upskilling programmes. For working professionals, there are university-partnered programmes and also its own B2B enterprise learning suite.

Operating in a growing segment with a comprehensive product mix is only part of the challenge. There is also the onus of getting the cost metrics right.

The company says it has never been a cash-guzzling business. In fact, it did not raise external capital for the first five years of its journey.

The edtech startup, which was founded in 2015, was bootstrapped until August 2021 when it raised $185 million from Temasek, IIFC, and IIFL. In June 2022, it raised $225 million from James Murdoch’s Lupa Systems and the family offices of Lakshmi Mittal and Sunil Bharti Mittal.

Given the ‘funding winter’ in the macro environment, the startup says it is looking at cash conservation and building the right cost model.

“We do not require investment to burn and grow. We’re not trying to achieve growth at any cost. Instead, we ensure we have the right investments and the right cost structure built,” says Mayank.

To conserve cash, the edtech company has cut down on marketing and performance spends and has also taken the franchise route for its offline experience centres in Delhi, Jabalpur, Kolhapur, Kottayam, and Patna. It uses these centres only for counselling and customer acquisition.

“Compared to the K-12 segment where teaching happens offline, our centres focus on counselling, so that we can present the right programmes to our learners. We are seeing good traction in this,” says Mayank.

upGrad wants to expand but not in a capex-heavy manner. “We can work with trained education entrepreneurs in India who can take us to markets where we cannot be physically present,” says Mayank, referring to Tier I and II cities.

upGrad has gone on an M&A spree over the last 2.5 years, acquiring 11 startups. In the last couple of months, it acquired New Delhi-based edtech startup Harappa Education and Bengaluru-based recruitment and staffing firm WOLVES.

In all, the startup has acquired 13 companies, under different verticals—upskilling and reskilling programmes, test prep, courses for college students, study abroad segment, and short skilling courses.

Mayank says these acquisitions have been made to “build a lifelong learning journey” for learners, which starts after they complete 12th standard.

However, industry peers feel this approach is no different from what a number of large startups have done in the past—use capital to consolidate the market and hope for synergies to play out.

“BYJU’S has done something similar. We have seen similar tactics in ecommerce, ride-hailing, and other segments,” says Abhinav Mittal, Founder of The WorldGrad, an edtech startup that helps students apply abroad. “For the moment, the company (upGrad) is bringing more learning choices for students, keeping the edtech ecosystem afloat. It takes time to scale up smaller businesses; so, the time for a sustainable economic model is still a while away.”

According to Bharat Gupta, Co-founder, FunctionUp, a competitor, upGrad needs to grow inorganically and look at adjacent markets. “A lot of its acquisitions are in the areas of studying abroad and foreign education courses, which is an adjacent category for upGrad. That is how they are planning to grow and improve their topline. Any other acquisitions they have done is to improve the value proposition of their own current businesses.”

upGrad believes the international market is important to it. The company has a physical presence in 10 countries, serving both B2C and B2B customers. It has teams in Southeast Asia, the Middle East, the UK, the US, and Canada. Over 25% of its revenue comes from international businesses.

According to Mayank, as the education and faculty cost in the US and the Western world, in general, is high, upGrad’s courses provide a cost advantage. “India has a large faculty pool and we have very strong subject matter expertise specifically in STEM topics. We are seeing that a lot of people (around the world) are seeking that kind of education online.”

upGrad is actively looking at an M&A approach to get a foothold in large geographies to build and scale ‘large’ edtech companies. For instance, in Australia, it acquired Global Study Partners, a startup that helps students connect with universities in the country. Global Study Partners has a network of over 600 institutions, with a focus on countries including Australia, Canada, the UK, and the US.

“Internationally, Indian edtech ventures are still trying to make something of it—in terms of credibility and validation, but there is a familiarity (about Indian edtech startups) and that’s going to work to upGrad’s advantage,” says Saher of Gartner.

Bengaluru-based Scaler also made an international move with the launch of Scaler Neovarsity, which offers an online master of science in computer science, with specialisation in software engineering, artificial intelligence and machine learning, accredited by the European Credit Transfer Accumulation System. BYJU’S is looking to acquire American edtech startup 2U, though it has not materialised yet.

The startup caters to nearly three million learners across 100 countries. It has over 300 university partners and 1,000 corporate clients worldwide, including Infosys, Cyient, Bennett Coleman, ITC Infotech, AstraZeneca, and Kotak.

“For companies of upGrad’s scale, it is very difficult to grow more than 50% year-on-year (YoY) because you are already doing close to $1 billion of revenue in a year. From there to grow 50% (YoY) is very difficult because you have saturated the market you are in,” says Bharat of FunctionUp.

Does upGrad have the resolve and patience to play the long waiting game?