Why the sky’s the limit for astro-tourism startup Starscapes 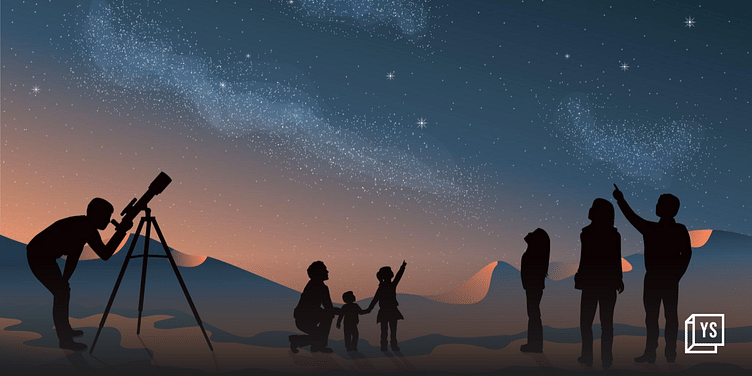 We may all not have Van Gogh’s talent to keep a Starry Night alive forever, but that doesn’t mean we aren’t mesmerised by the night sky.

Young Paul Savio was no different.

On nights out with his father as a young boy, Paul was held captive by the night sky. Growing up in Bengaluru, he was a regular visitor at the planetarium, participating in events and competitions organised by NASA and ISRO.

After graduating from IIM Calcutta in 2010 and stints at Nokia, Airtel, and Samsung, Paul decided to pursue his interests - and make money.

In 2015, Paul and Ramashish Ray bootstrapped ﻿Starscapes﻿ Experiences, an astro-tourism startup that runs a chain of observatories.

“We were in corporate life and found a passion that translated into a business. Seeing the potential and trying to make it happen has been very exciting. We got into this space for the adventure of creating something new,” Paul says.

The target audience? Anyone fascinated with the skies.

The Gurugram-based startup has public and private observatories in Kausani and Bhimtal in Uttarakhand, one in Ooty, and a mobile observatory in Jaipur.

Starscapes has a presence in Goa, Pondicherry, and Madikeri in partnership with Club Mahindra, a hospitality company under the Mahindra Group. Guests here can head to the nearest dark sky locations where Starscapes provides the technology and guidance for stargazing.

The startup is also developing Benital as India’s first Astro Village, in association with Uttarakhand Tourism Board.

The startup organises events such as night sky shows, solar observations, star parties, experiential science activities, and selfies with the stars. All these activities are guided by Starscapes' StarGuides.

“We want to bring astronomy experiences to everyone. ‘Everyone’ is the key word here. It is not just meant for astronomy enthusiasts. It is meant for people who are looking for something new,” Paul says.

All observatories are equipped with telescopes and other requisite equipment. They also house astronomy museums, where Starscapes has set up exhibitions, VR experiences, and a merchandise store.

“You will see the moon, the planets that are then visible, the rings of Saturn, the satellites of Jupiter, the phases of Venus that appear similar to those of the moon, and some deep sky objects like Orion Nebula, which is 700 light years ahead where stars are being born. This is the entire show,” Paul says.

The events are led by 25 trained employees who talk about histories, trivia, science, and the mythology behind constellations, planetary bodies, and deep sky objects. People who sign up for the experience also learn how to spot certain stars and constellations.

If someone can’t reach an observatory, Starscapes brings the experience to their doorstep with portable observation tools and temporary set-ups. However, the startup has discontinued this offering post pandemic.

Workshops on how to make rockets, sun dials, and models of spacecrafts and rovers are organised for children. Astronomy and photography enthusiasts can attend astrophotography workshops with experts. The pricing for these goes up to Rs 10,000.

Starscapes has partnered with small homestays and hotels to provide an astronomy experience at their locations.  The startup leverages its relationships with them to spread the word about its offerings.

“We have a partnership with Club Mahindra across all its properties, and are currently servicing six of its biggest resorts. We're in talks with four of the biggest global hospitality brands for activities within their properties, with one expected to close in the next week."

"Apart from that, many smaller homestays and hotels around our observatories organise astronomy experiences,” Paul says.

Other offerings include three-hour astro parties curated for small groups with activities such as stargazing, constellation hunting, sky observation, and astrophotography. These parties cost Rs 40,000 (plus transport for parties away from the centres). Each can host up to 30 people and is available at major dark sky locations pan India.

It also does events for residential apartments, and has partnered with JK Lakshmipat University in Jaipur and Shiv Nadar University in Dadri.

Business took a hit during the pandemic, and the startup relaunched operations only in 2021.

Aiming for the stars

Astro-tourism is emerging in India as a part of ecotourism. It is further supported by a recent Ministry of Tourism initiative to discuss and explore “nature-based tourism”. The concept was promoted by the Ministry through the webinar series “Dekho Apna Desh”.

Astro parks are being set up in Madhya Pradesh and Rajasthan under the State Department of Art and Culture. In Ladakh, the government has partnered with the Indian Institute of Astrophysics to launch an astro-tourism initiative in Hanle village.

The sky seems to be the limit, which has led to the emergence of other players. Starscapes faces competition from startups like Chennai-based Space Arcade and Delhi-based Spark Astronomy. While some of the offerings of these startups are similar, Starscapes is the only one that has observatories and partnerships with hospitality companies.

Starscapes is looking to launch a new observatory in Coorg and relaunch astro tours where tourists are taken to dark sky locations in places like Spiti Valley, Ladakh, and other parts of the country. These came to a halt during the pandemic owing to lockdowns and restrictions on travelling.

The startup is also looking at more partnerships with schools and colleges for excursions and outings.

Founded with an initial investment of Rs 20 lakh, Starscapes is looking to raise funds in this financial year. It also wants to double its team size in the next four months.

“We are experimenting with a lot of business models right now. And, we are looking for an investor who is also interested in astronomy as a subject, and is passionate about it,” Paul says.