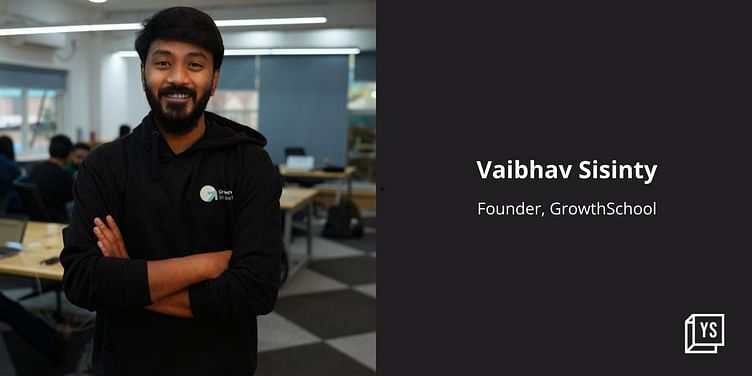 In the latest episode of 100x Entrepreneur Podcast, Vaibhav Sisinty, Founder of edtech startup GrowthSchool, talks about numerous learnings from his journey, including how to identify the right product-market fit.

Vaibhav Sisinty has guided more than 300,000 students through his startup ﻿Growth School﻿ and has helped them on their journey of learning, growth marketing, and working with a growth mindset on how to build and grow companies.

Earlier, Vaibhav spent more than four years working for Uber. He subsequently began experimenting by assisting startups and then decided to commercialise his talent.

In a conversation with Siddhartha Ahluwalia, Founder and host of 100X Entrepreneur podcast, Vaibhav talks about how he learnt and grew his marketing skills during his time at Uber and traveltech company Klook and how he found his product-market fit for GrowthSchool.

Vaibhav started his first startup Discovering Android when he was in his first year of engineering and learned SEO and website building himself. In his second year of engineering, he started CrazyHeads, which was also involved in Facebook ads, Google ads, SEO optimisation, offline marketing, and branding. This led him to pick up all these skills of marketing and growth.

“When I was running CrazyHeads, I didn’t know who I was. I would have never called myself a marketer. But when I joined Uber in 2015, I joined as a launch person. The idea was to go and launch in cities. But my leaders at Uber saw that my inclination towards growth, the strategies that I was applying on growth in the cities that I launched were working, and they saw that I was really good at it,” Vaibhav recalls.

On their recommendation, he tried his hand at marketing and growth at Uber. Vaibhav says Uber was a small company in India when he joined; it was peaking when he left.

“So, at that scale, I have done a bunch of things. And essentially, my school has been Uber and then Klook, where I also led a team and we grew the business from $5 million to $25 million,” says Vaibhav.

Vaibhav also had a very keen interest in teaching. He has been doing offline workshops since he was 18, teaching what he had learnt at that point of time. He claims to have trained more than 20,000 people offline in ethical hacking, web development, branding, and acquisition while he was in college.

But he no longer had the time to do offline training after joining Uber.

“I did my first course when I was in Mexico City. It was raining for two days and I couldn’t step out. I had about 15,000 followers. I put a post on LinkedIn asking if anyone would be interested to pay if I created a small Instagram post on how I got to 15,000 followers. I rolled out a pre-payment link of $10. And I got about 100 people to pay $10 before I created a course,“ says Vaibhav, adding that he was still with Uber while this was happening.

The next thing? A lot of people across the world ended up paying $15,000 for the online Instagram course.

Vaibhav then launched a LinkedIn course as he had crossed 50,000 followers on the networking site. He began doing this as a side hustle.

During COVID, he launched a LinkedIn workshop focusing on India, for which the attendees were more than he anticipated.

“There is so much content already available on LinkedIn in India. Why were Indians paying Rs 500 for a simple workshop? I didn’t understand it because my perception was people won’t pay. That’s when I got to know that people want to learn from people who they want to become,” says Vaibhav.

He realised that there was a lack of access to great education and most of the existing curriculum was outdated. The intention to fix this situation led him to start GrowthSchool in September 2021.

“The thesis was people want to learn from people who they want to become. And that kind of worked out. People truly want to upskill and grow. They want to invest money. And that was my early product-market fit. And all this took us about seven-eight months,” explains Vaibhav.

According to him, product-market fit is not about great retention numbers and formulas. “For me true retention is if I shut my product down today, will 25 people line up outside my office asking us to please start again?”

To know more, listen to the podcast here:

01:55 – Starting the growth journey: From his 1st venture to Uber

05:24 – Helping other startups: his playground to learn

20:36 – Zoho Sponsored – Prashant Ganti on where founders struggle with payroll and how they can fix it

23:58 – Scale and format of courses before and after funding

39:17 – Focus and internal goals in near future

41:46 – His definition of product-market for GrowthSchool