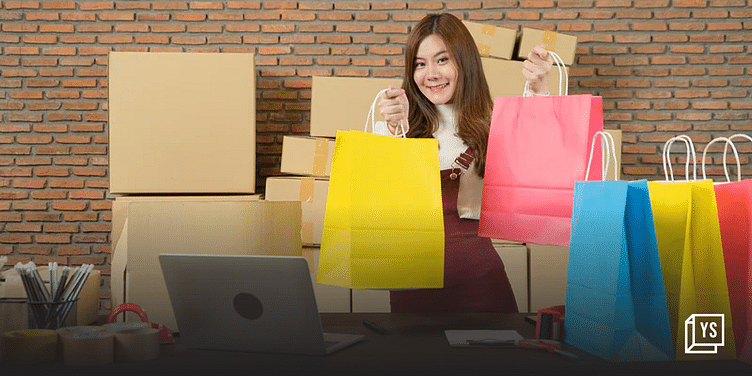 As inflation stabilises and consumer demand increases across the board, festive season sales are likely to be the primary fuel for the growth of ecommerce sales in 2022. However, online sellers will also have to contend with brick-and-mortar players.

‘Revenge shopping’ seems to be the word on the street as online festive season sales kick in from September 23.

Recently, ﻿Flipkart﻿ announced its flagship sale, The Big Billion Days, from September 23 to September 30. ﻿Amazon﻿ India's Great Indian Festival sale too is scheduled to begin on September 23, though it is yet to announce a closing date. Apart from Flipkart and Amazon, which command over 60% of the ecommerce market in India, other online retailers too are gearing up for the festive season.

After being frugal, customers are looking to loosen their purse strings this year and are keenly watching the online space.

Reeta Jain, a 38-year-old homemaker, says she is eagerly waiting for the mega online sales to buy a whole range of home appliances such as a microwave, an air conditioner, a 32-inch-television, and a mid-range Android mobile phone for her son. “I’m sure there will be great deals on offer, and that’s the reason I’ve pushed all my purchases to October,” she says.

Industry experts anticipate a growth of 20-25% in gross merchandise value (GMV) or the total value of sales on ecommerce platforms for the second half of the 2022 calendar year.

“Compared to H2 2021, which saw GMV of close to $8 billion across ecommerce platforms, we anticipate H2 2022 to clock between $11 billion and $12 billion in sales,” says Naveen Malpani, Partner at Grant Thornton Bharat.

He says stronger demand and stabilisation in inflation will ensure that H2 performs better than H1 when it comes to sales online. However, ecommerce players will also have to contend with brick-and-mortar players, as this is the first time since 2020 that offline retail players will be able to run their business at scale.

Brands and sellers on ecommerce platforms are keen to cash in on the festive season sale as 60-75% of their annual business comes from sales made between August and September till the peak wedding season, which concludes by December.

Amazon India, Flipkart Group, and emerging players such as ﻿Meesho﻿ have announced ramping up of logistics and warehousing and expansion of seller base ahead of the festive season sale announcements.

“Our million-plus sellers from local shops, traditional artisans and weavers, and various startups will provide customers value and the convenience to shop from anywhere, anytime. We are hopeful of a buoyant festive season, and our sellers and partners are excited to serve customers across India during this festive period,” says a spokesperson from Amazon India.

“We have over 60 fulfilment centres, sortation centres across 19 states, and over 1,850 Amazon-owned and partner stations that are gearing up for the festive season, along with 28,000 I Have Space partners and thousands of Flex partners ready to deliver smiles to customers across the country.”

Flipkart, in its announcement of The Big Billion Day sale, said that nearly 130 specials are announced as exclusive for the event by over 90 brands across fashion, electronics, mobile phones, large appliances, personal care, and other categories. The Walmart-backed company is also pushing offers on medicine delivery and hotel booking services as part of its sales.

Smartphones, consumer electronics, and fashion apparel are expected to dominate sales. According to Naveen of Grant Thornton Bharat, the demand for premium smartphones has been on the rise in India, with strong traction from Tier II and III cities.

“Almost all ecommerce players now have 100% pin code coverage, and rural demand is going to be the bigger play,” he says.

“Today, 65% of our customer orders, 85% of new customers on Amazon.in, and 50% of our million-plus sellers come from Tier II and III cities and towns,” says the Amazon spokesperson.

Smartphones and big-ticket purchases such as consumer electronics are expected to pump up the GMV numbers.

According to Arvind Singhal, Founder and Chairman of Technopak Advisors, “Smart brands will continue to seduce the consumer by launching new products in the festive period.”

Sellers have witnessed a nearly 2x to 3x spike in the cost of bidding for keywords across ecommerce platforms, while Google and Facebook have seen bid costs spike by nearly 20-50%.

“We are spending 2x-3x more on ads, and we anticipate a spike of 3X in terms of GMV for our products,” says Prince Kapoor, Co-founder of sanitary product and personal care brand, Plush.

He says the ‘revenge shopping’ phenomenon is likely to play out during the current sale events.

Apart from ramping up their ad spends to show up higher in online searches, sellers and brands have also set aside a budget for parking inventory with ecommerce companies for timely shipping.

“We help our brands with inventory planning and management at least three to four months ahead of the event,” says Baqar Iftkhar Naqvi, Founder and CEO of Upriver, an ecommerce service provider for direct-to-consumer brands.

He says marketplaces promote brands, which give an additional 5-10% discount for festive season sales, compared to regular discounts.

Ankita Shah Sonawala, Founder of homeware and decor brand EZ Life, which sells primarily on Amazon India, says that the brand offers a nearly 40% discount on the selling price during the festive season sale, as opposed to 15-20% on an average.

“These sales are mostly to drive volume and to get listed as part of lightning deals. We expect to see better sales this year as gifting is back, and home as a category does well for gifting,” she says.

While impressive discounts, ranging from 50% to 80%, continue to be the top draw, additional offers from payment, card, and BNPL (buy now pay later) providers are likely to sweeten the deal further for buyers, says Naveen of Grant Thornton. “The opportunity to capture customer data is a draw for financial service providers,” he adds.

According to him, while Meesho and beauty-focused ecommerce platform ﻿Nykaa﻿ are likely to run offers and discounts during the period, it might be difficult for them to match the investment and scale of established players like Amazon and Flipkart and emerging but well-known players like Jio and Tata Neu.

The upcoming festive season sale will be one to watch out for as several international brands have entered the Indian market, brick-and-mortar stores are operating at capacity, and shopping malls and multi-brand outlets will try to push sales to keep up with their online counterparts.