How Saakshi Sharma, a mother to a dog with meat allergy, started a vegan pet food startup 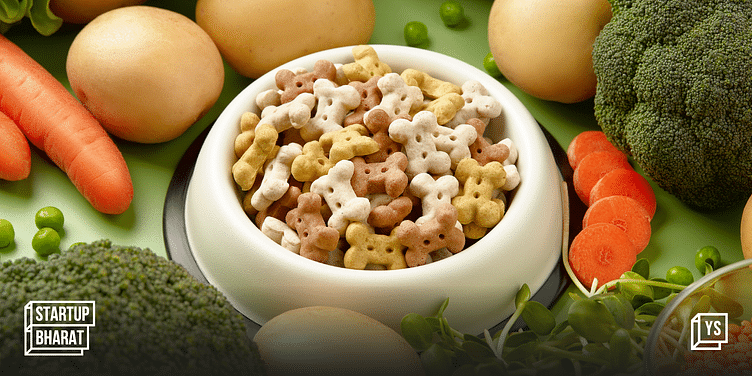 Sixteen-year Ruby was not a fussy eater. She had some white mixed into her coat, some silver peeking through at certain angles, but she was still an easygoing puppy at heart for all intents and purposes.

Except when it came to food.

Extremely allergic to meat and animal-based foods, Ruby would throw up whenever her mum, Saakshi Sharma, tried to incorporate some species-appropriate food into her diet. And then the constant itching would set in and she’d stop eating completely for two or three days.

To break this cycle, Saakshi tried various diets and foods, before putting Ruby on a 100% vegan diet. A vegan herself, Saakshi had seen drastic changes in her life ever since she gave up animal-based foods.

Once on the vegan diet, Ruby immediately started seeing improvement in not just her gut health and skin condition, but in her overall energy levels.

When Saakshi started searching for vegan, plant-based diet options for dogs in the market, she came up short. Her only option was to prepare food for Ruby at home, ensuring it had all the 37+ essential nutrients that animals need in their food every day. It was a tough situation to navigate, but it gave Saakshi a new perspective on the pet food industry in India.

If she, a vegan and a canine nutritionist herself, had so much trouble putting together wholesome, vegan meals for her Ruby, it had to be doubly hard for other pet parents in the same boat as her.

This encouraged Saakshi to join hands with her fellow vegan colleague and friend, Tejwinder Singh, to start Freshwoof, a plant-based pet foods company based out of Jaipur, Rajasthan.

Founded in 2020, ﻿FreshWoof﻿ has raised a pre-seed round from Marwari Catalysts, and a few angels, so far. The founders have invested Rs 1 lakh in the business, and its products retail at Supertails, Vegan Dukan, Wildermart, and other ecommerce platforms.

Veganism and vegetarianism in the pet foods space are somewhat of an oxymoron—at least to canine nutritionists who swear by species-appropriate diets.

It is widely accepted that despite being domesticated, pets’ biological make-up doesn’t make them ideal candidates for just vegetarian/vegan diets. Many canine nutritionists in recent years have advocated species-appropriate diets for pets, rationalising that, had they been in the wild, they wouldn't have access to vegetarian foods such as grains, pulses and vegetables.

But a recent study conducted at the University of Winchester, UK, showed that vegan diets are healthy and safe, and that dogs on raw meat diets are only marginally healthier than vegan ones.

In a country like India where vegetarianism is intricately tied to religious beliefs, wholesome and nutritious vegan diets have helped pet parents feed their dogs better.

“My parents only let me adopt Carla on the condition that I’d feed her veg because no one in the family consumes meat. For the longest time, I held off on adopting because I thought it wouldn’t be fair to the dog if I fed it food that did more harm than good,” says Shivam Goyal, a class eighth student based out of Bengaluru’s HSR neighbourhood.

“But my dad and I have been reading a lot of newly published papers that say vegan diets are actually healthy for dogs, and that gave me the confidence to finally adopt a sister-dog,” he adds.

The Indian pet food industry has seen tremendous growth since COVID-19 after people adopted and bought four-legged companions. Euromonitor says India’s overall dog food market is projected to grow by 15% over the next five years, and vegan brands stand to gain a lot from increasing awareness around vegan dog food.

Freshwoof’s meals come in ready-to-feed packets that don’t require any additional cooking. There are three flavours currently available: brown rice and beans; tofu and quinoa; and oats and chickpeas.

Saakshi says the vet-approved food uses organic, ayurvedic ingredients such as ashwagandha, amla, moringa, ginger and turmeric—all of which offer a variety of health benefits to dogs.

But getting here wasn’t an easy feat.

“Along with the health aspect, palatability plays a vital role in any pet food. There’s no point in making a recipe that’s healthy but not tasty,” Saakshi explains.

Initially, 80 of the 100 dogs who tested Freshwoof’s recipes rejected the meals Saakshi and Tejwinder created. The second time, only 35 liked the meals. Finally, after seven tries and 21 recipes, 98 of the 100 test subjects liked the food.

Freshwoof hopes to launch in international markets by the end of the next financial year. It is targeting countries such as Australia, Singapore, and the UK for expansion.

(The copy was updated to correct a typo in the headline)