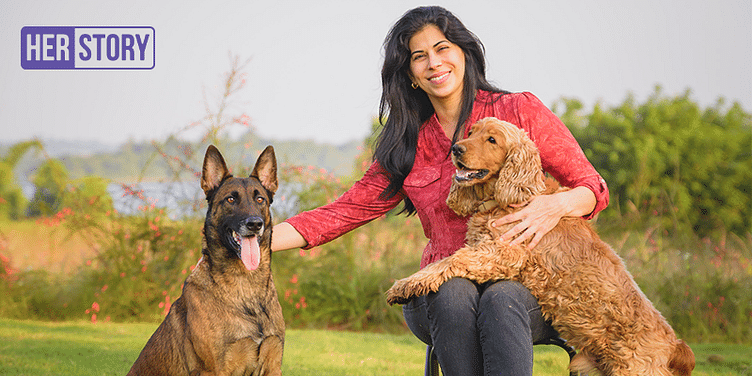 Shirin Merchant is a canine behaviourist, dog trainer, and Founder of Canine Can Care. She trains dogs not with intimidation and force but by understanding their behaviour and with compassion.

Maya is a Labrador who came to Shirin when she was eight months old, Shanti and Max are Belgian Malinois, and Duchess and Tara are Dutch Shepherds.

“My dogs have been my best teachers,” says the woman who has trained thousands of dogs in India and abroad.

In a country where dogs are still trained with old methods of intimidation, her job to change mindsets and training methods has not been an easy one.

Also, most pet parents in India don’t understand the commitment it takes to bring home a dog, which means Shirin’s goal is to educate and change their outlook on pets.

In a chat with HerStory, Shirin Merchant tells us all about her career, canine love, and how she is changing mindsets towards canine training.

Shirin started her career in the field of dog behaviour and training in 1995. Her love for animals was well-known among her family and friends. In fact, as a child, her grandmother would help her sneak in puppies into the house.

Born in Pune, Shirin spent most of her early years shuttling between Mumbai and Pune and after graduation chose to join her father’s business.

She says, “My heart was not into it. I had always wanted to do something related to animals but since there was no nothing at that time in India I continued helping my dad.”

Things took an interesting turn in 1995 when she attended a workshop by world renowned canine behaviourist and trainer John Rogerson from England. Meeting him changed her life. John invited her to study in England and since then, there has been no looking back.

Shirin is a qualified canine behaviourist and the first to tackle canine problems using the science of canine psychology. She spent over four years in England studying, competing in working trials and learning from the best trainers in the country.

When she returned to India she realised that the dog training methods in India were crude and primitive. An aggressive dog was assumed to be rabid and was put to sleep.

“Dog behaviour was unheard of and dog training was being carried out using primitive methods of intimidation and pain, so I decided to change things,” she says.

In 1998, Shirin launched Canines Can Care, a one-of-its-kind organisation dedicated to pioneering a variety of canine-related activities in India. It introduced assistance dogs in India to help people with disability. Magic, a Labrador, was placed with Sanam Karunakar who was paraplegic and the duo became famous.

“These dogs are trained to carry out tasks such as retrieve objects that are out of reach, open heavy doors, switch on and switch off lights, pull wheelchairs, get help in case of an emergency and similar other tasks,” says Shirin.

“In fact, the ‘Canines Can Care’ search dog team was the only one representing India in the aftermath of the Bhuj earthquake in 2001,” she adds.

The trainer presents multiple talks and workshops around the world on canine training and also conducts behaviour courses for dog lovers in India. This also helped to create a pool of dog trainers whose methods of training are reward-based instead of intimidation and force.

In 2007, Canines Can Care also introduced ‘Canines For Corporates’, off-site training camps where through interaction with dogs, participants learn, and develop a variety of life skills.

Shirin travels across the country and abroad hosting workshops for pet parents and train students to take up dog training. She also consults on cases where pet parents need help with their dogs behaviour. “Clients come to me sometimes as a last resort because nothing is working for their pet. I go to the root of the problem and see what kind of behavioural pattern triggered it.”

The kinder approach to training dogs has been her big victory.

“The look in a dog's eyes when they are grateful for what you have done for them makes all the difference,” she says.

Last year, she was felicitated by the President of India Ram Nath Kovind at the Rashtrapati Bhavan and Minister of Women and Child Development Maneka Gandhi at the First Ladies Awards.

But Shirin is not one to rest on her laurels.

My career has been amazing and filled with milestones. There have been the superficial ones where I have won awards or accreditations or been invited as the first Indian to speak at prestigious International events. The best ones are where I have trained dogs  for assistance and search and rescue, who have made a difference to people’s lives.

Shirin reveals that the past two decades has seen an increase in the number of pet owners.

“More people today are keeping dogs than ever before and pet parents are more aware of dog training and behaviour than they were 20 years ago, but yet we have more dogs being abandoned in India than anywhere else,” she says.

“The lack of education in our country - whether it is people who bring home a dog and have no idea what commitment it entails or the fact that even after years, we still have trainers in India who are quick to hurt a dog in the name of training are challenges that still persist,” she adds.

Anyone who has a pet knows why they are the best companions humans can have. As a canine trainer and behaviourist, Shirin has found her true friends and companions in her dogs. While her job can be emotionally taxing at times, the end result, especially the boundless love she receives from dogs makes it worthwhile.

"They are my best companions when I need time to think , take a break or even need the strength to keep going. Spending quiet time with my own dogs is the best feeling ever,” she says.

With a one-stop-shop for your pet’s needs, Shruthi Nithin is changing the game with For Love of...