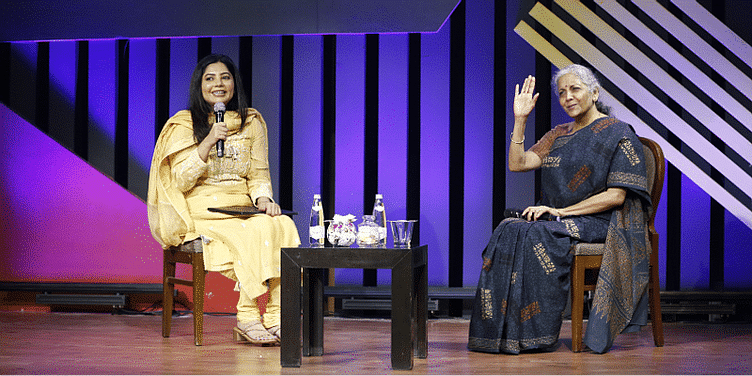 In a fireside chat at TechSparks 2022, Finance Minister Nirmala Sitharaman speaks with Shradha Sharma, Founder and CEO of YourStory, on India's evolving tech ecosystem and the government's various initiatives to bolster it.

Union Finance Minister Nirmala Sitharaman is optimistic about India’s position in the evolving digital world, as she highlighted the strides the country’s tech entrepreneurs have made in recent years at YourStory's startup-tech event TechSparks 2022.

In a fireside chat with YourStory Founder and CEO Shradha Sharma, Sitharaman also directed the spotlight at the government’s crucial role in India’s growth as a technology powerhouse by encouraging public-private initiatives such as India Stack.

She also applauded YourStory’s contribution in bolstering India’s startup ecosystem since its inception (in 2008).

“Post 2014, Prime Minister Narendra Modi is constantly engaging with startups, and YourStory has kept itself on the roll since it was formed,” Sitharaman said, adding that India is at a stage where it is now setting the benchmark for the world.

Shradha, speaking on ‘swadharma’ and ‘sadharma’ (practicing own dharma and true faith), asked the Finance Minister how she decides between welfare and budgetary discipline. Sitharaman responded that the act of balancing is a necessity, opening up about the tech ecosystem in India and highlighting the fact that there are many areas where India needs innovation.

Shradha Sharma: The government has done so much to democratise access and decentralise technology. What are some things on your agenda to further this and ensure inclusivity?

Finance Minister Nirmala Sitharaman (FM): The government is committed to ensure that the digital framework and technology-based solutions will be [for the] public good and available for everybody to use.

Regulators are constantly engaging to make sure options (through sandbox trials) are offered so every innovator’s solutions can be tested, so one no longer has to wonder how do I make it applicable – and in such a way that regulators would not have a problem.

I am placing a lot of emphasis on regulators constantly staying ahead of the curve. It should not be that solutions are coming from startups and regulators are spending time understanding them. This must happen simultaneously - and rapidly.

There is a commitment to engage with technology, and we offer dedication and policy stability. I think this will make a big difference.

SS: How do you go about decision-making, given that there are many factors to take into account while also being prudent and frugal? Is there any thumb rule?

FM: There is an element of balancing you have to do. However, if you are talking about fundamental necessities that have to reach every Indian, particularly those who have been denied for a very long time, there cannot be any more waiting.

I am very grateful to the prime minister who very clearly says ‘how long do you expect women to cook with firewood’? It is also not about just balancing resources; it is also about balancing principles. Do you want Indians to wait for fundamentals and basics, and do you want Indian taxpayers not to get anything in return? The balance is value for taxpayers’ money and using it productively so that everything has a multiplier effect.

As Indians, we set examples. Let's have more women in the startup ecosystem: FM Nirmala Sitharaman

FM: I do not think I have anything to say as you [startups] have proved yourself in the last two-three years. Now, you have to be clear on what path is to be laid out for the next 20-25 years, and what areas you have to work on.

I want startups to do well and make it count by aiding the government in the matter of policy decisions. Though, I must say that for every three ideas you bring to me, get me one idea on how to bring more women into the startup ecosystem.

I also do not want anyone to have the misunderstanding that the problem of women not finding equal space to operate happens only in India. I was reading some parts of the biography of US Treasury Secretary Janet Yellen, who held leadership roles in top institutions, and several observations in that reveal that women everywhere do not get that space. So, it’s a global issue but we, as Indians, can set an example in this.

SS: How do you energise yourself, given your busy schedule?

FM: I do give myself some time. I listen to music, read books, or talk to people who can be motivational to me, who I respect and share a bond with. Flying is something I never enjoyed. It is so dry and takes a lot of time in terms of the routine of going to the airport. I love train travel; it’s a lot easier on you, and lets you stretch your feet. Also, it lets you watch the changing contours of India. But flying, though drab, offers a big advantage: I have a good store of music and keeps me energised through the flight.