As Indians, we set examples. Let's have more women in the startup ecosystem: FM Nirmala Sitharaman 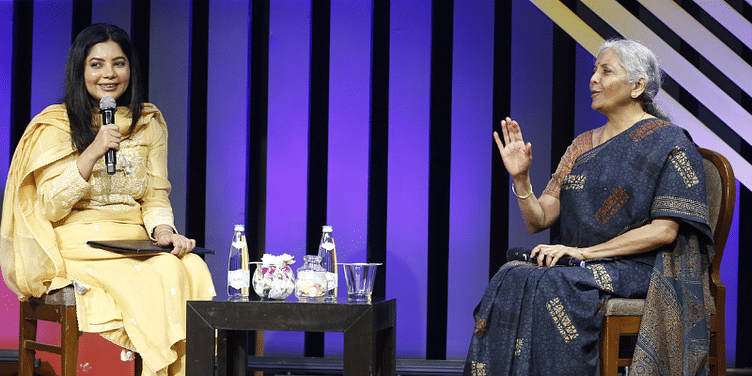 At TechSparks 2022, Union Finance Minister Nirmala Sitharaman, in a fireside chat with YourStory founder Shradha Sharma, said India could set an example by having more women in the startup ecosystem.

"There should be more women in this room!" Union Finance Minister Nirmala Sitharaman made this observation during a fireside chat with YourStory Founder & CEO, Shradha Sharma, at TechSparks 2022, India's largest startup-tech conference.

However, she was also emphatic that, if there was any country that could solve this gender imbalance in the startup ecosystem—which seemed to be a problem around the world—it would be India.

Referring to a recent book she'd read on US Secretary of the Treasury, Janet Yellen, she said, "I could find excerpts of various people, whether it was in university, working in the government, or in any other space—several observations that do say women don't get the space," she said.

However, she noted, "Let's not get discouraged by the fact that I said that (this) happens only in India. Not at all. It seems to be a global matter. But as Indians, we break many things (stereotypes), set examples—we can set an example in this too."

This is the second time the Finance Minister took stage at TechSparks. In 2020, in her keynote address at TechSparks, the minister had focused on the need for open dialogues between the government and the people of the country.

Earlier this year, speaking at Budget 2022, the FM had remarked, "Naari Shakti is the harbinger of our bright future."

At the time, she elaborated, “Recognising the importance of Naari Shakti as the harbinger of our bright future and for women-led development, our government has comprehensively revamped the schemes of the Ministry of Women and Child Development. Three schemes—Mission Shakti, Mission Vatsalya, Saksham Anganwadi, and Poshan 2.0—were launched recently to provide integrated benefits to women and children."