Neither a 2-wheeler nor a 3-wheeler: This commercial EV maker’s delivery scooter is in between 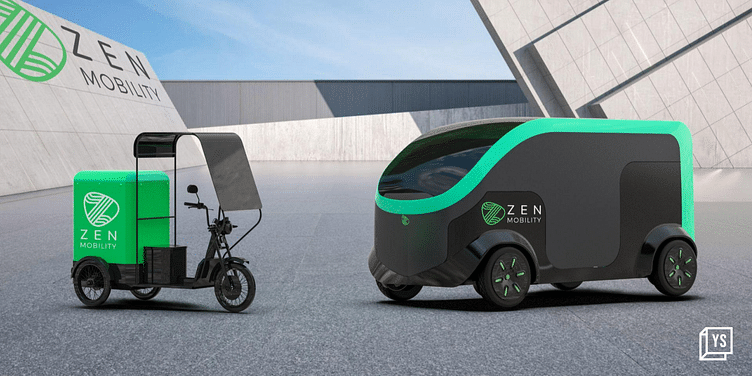 Founded in 2018 by Stanford University engineer Namit Jain, Zen Mobility is a Delhi-NCR EV startup that caters to the commercial EV sector. It offers two products: the Micro Pod and the Maxi Pod.

When it comes to commercial electric vehicles, the most widely available options in India today are either two-wheelers or three or four-wheeler minitrucks.

On average, a delivery executive on a two-wheeler can carry a maximum of 150 kilograms of cargo. Players like ﻿Okinawa﻿ and ﻿Zypp﻿ Cargo, among others, have modified their EV scooters to carry 200-250 kilograms. Two-wheeler EVs might be a good option for an ecommerce company with money to invest, but they usually require delivery executives to do multiple trips to and from the warehouse.

Zen Mobility says it has a better solution to optimise deliveries and help companies save money.

Called the ‘Micro Pod’, the vehicle is a cross between a two-wheeler and a three-wheeler auto truck. Namit Jain, the Founder of ﻿Zen Mobility﻿ and the engineer behind the design, says the Micro Pod can carry three times more cargo than an average two-wheeler.

The startup has invested around $2 million in the development and launch of the first model, it told YourStory.

"The Zen Micro Pod can essentially do the work of three delivery executives. It offers a lot of space to load delivery packages — three times more than an average two-wheeler. At the same time, it’s lighter than an auto truck," he says.

Zen Mobility was founded in 2018 by Namit, who grew up around family members dealing in auto parts. After college, he worked with Deutsche Post, where the StreetScooter—a vehicle that has inspired the design for the Micro Pod—caught his imagination.

The startup has not raised any external funding, so far. It has raised capital mainly from its parent company, Gurugram-based NTF Group.

For a solution like the Micro Pod to work in India—mostly to account for the lack of a widespread charging network—the entrepreneur said it was necessary to ensure that the vehicle could carry heavy loads over long distances.

To combat range anxiety, the Micro Pod comes with two batteries; two more can be added to the vehicle.

The Micro Pod can do 100 kilometres on a single charge. It can be connected to any charging port and takes around two hours to fully charge, the company claims. A year or two down the line, Zen hopes to introduce swappable batteries.

Namit says the next iteration of the Micro Pod would be made out of carbon fibre, which will be able to withstand speed bumps and degrade slowly as compared to a standard metal frame.

The startup has manufactured 20 vehicles already, ready to be shipped out. Its turnaround time for manufacturing new orders is two weeks.

Zen is also developing the Maxi Pod, which is essentially a modifiable frame that can be retrofitted for a myriad of layout configurations—for example, with seats for a shared mobility vehicle, or storage for bigger delivery vehicles.

Pilot projects are ongoing in Delhi-NCR and Bengaluru, and the company says it has already bagged an order for 5,000 vehicles.

The Micro Pod, which will launch in early 2022, costs around Rs 2 lakh to Rs 2.5 lakh rupees, while the Maxi Pod’s cost will depend on the configuration.

Zen Mobility says it wants to raise external funding to grow and scale in the next six months.

With companies, including ﻿Flipkart﻿, ﻿Myntra﻿, IKEA, ﻿Zomato﻿, and Amazon committing to EV fleets, commercial EVs are expected to grow in number, hitting about 45-50 million by 2030, according to a KPMG report, from one million in March 2022.

For Zen, which has already received interest from a number of these players, the market is ripe for the taking.