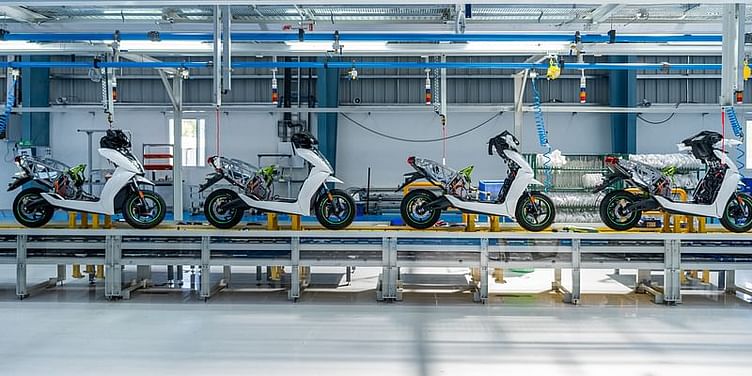 It’s a big step up for the two-wheeler electric vehicle manufacturing company from its Whitefield 'miniplant' that ekes out just 1,750 vehicles per month. The new Gen 3 plant can support the manufacturing of 35,000 e-scooters per month and houses two units—one for vehicle assembly and the other for battery production.

The production plant is expected to provide a huge fillip for Ather in terms of meeting the demand and reducing wait times. But more than that, it serves as a model for ﻿Ather Energy﻿'s future plants as it incorporates automation and IoT capabilities. Addressing a room full of reporters, Ather’s CTO and Co-founder Swapnil Jain said the new facility is 100% IoT-based, whereas Gen 2, Ather’s first big plant—also in Hosur—only uses IoT in its battery line.

Moreover, the Gen 3 facility is strategically important for the company as it puts to the test various efficiency-building processes developed by the engineering, design, and manufacturing teams based on their learnings from other facilities.

And the proof is in the pudding. Building on the other two facilities, Swapnil says the new plant has been able to improve the company’s overall ‘takt time’ by 10X. Takt time is a manufacturing term for the time taken to manufacture and assemble a product to meet consumer demand.

Ather has also been able to improve ‘work content’—the number of hours put into manufacturing one vehicle—by 4X.

The second manufacturing unit comes as a shot in the arm as Ather can now build faster.

The new plant isn't just technologically advanced--the EV maker has ensured that the unit is more environmentally sustainable in terms of recycling and reusing industrial waste within the complex. Wastewater, for example, is recycled into the septic tank water to power flushes, while the energy discharged by batteries during testing is reabsorbed by the grid and is used again to test the charge/discharge cycle for other batteries.

The new facility currently has two battery production lines but plans to add three more to run at full capacity.

Safety checks and balances have been built throughout the facility to prevent any mishap. The battery production unit, for example, has been entirely housed in a separate building, far away from the vehicle assembly unit. The batteries, themselves, undergo rigorous testing, including software checks.

The new facility will largely handle the production of Ather's third-generation scooters along with existing ones, Swapnil said.

When asked about plans for the remainder of the financial year, Swapnil said Ather is focused on expanding its ‘Ather Grid’ or charging infrastructure.

“We’ve always set up charging infrastructure before we’ve entered any new market, and we’ll continue following that strategy,” he said, adding the startup plans to install 1,400 additional grids by the end of FY 2023—up from 500 fast-charging stations currently.

By the end of March 2023, the EV company hopes to nearly double its experience centres—from 76 at present to 150 across 100 cities.

In October this year, Ather raised Rs 400.6 crore from Caladium Investment and Herald Square Ventures. May saw the startup securing $128 million in a Series E round led by National Investment and Infrastructure Fund Limited (NIIFL), existing investor Hero MotoCorp, and others.