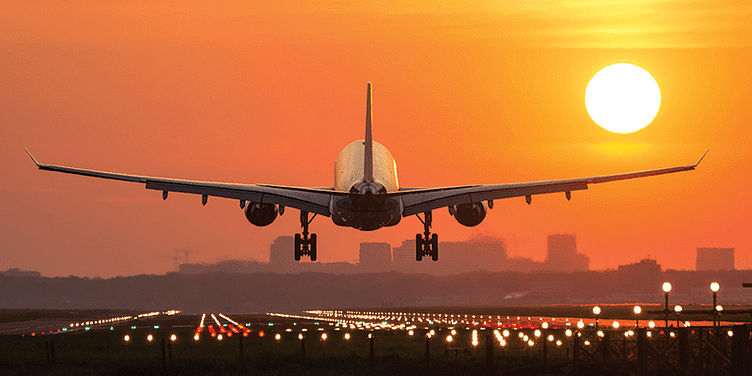 The V-shaped recovery of the Indian civil aviation sector might be dampened by gathering COVID clouds and geopolitical headwinds in 2023. Expansion plans of domestic airlines might be hit by shortage of aircraft components.

With tailwinds of high domestic air passenger traffic and airlines' ambitious expansion plans, the country's civil aviation sector is firmly on a V-shaped recovery trajectory but the gathering COVID clouds and geopolitical headwinds could cause turbulence in 2023.

Air India's plans for expansion and consolidation of operations, IndiGo's focus on wide-body planes, Jet Airways' future flight path, and airlines' overall profitability will be key factors for the aviation sector, which has been witnessing more than four lakh domestic passengers daily for the past few weeks.

All said, global supply chain disruptions that have caused shortage of aircraft components and delay in plane deliveries, as well as spurt in coronavirus cases globally are concerns.

As the aviation sector is climbing higher in terms of passengers and planes, the number of airports are also going up, with new ones being inaugurated at Goa and Arunachal Pradesh. The country has 146 operational airports, heliports and water aerodromes, and the government's aim is to have at least 200 operational airports in the coming years.

"I believe that the civil aviation sector has rebounded and what we in economic parlance say is a V-shaped recovery. A very strong V-shaped recovery... I am very confident that this growth in India will continue in the years to come," Civil Aviation Minister Jyotiraditya Scindia said in an interview to PTI this week.

Also, this year, scheduled international flights to and from India restarted in March after more than two years.

While the focus in 2023 will be on profitability and possible impact of COVID, the outlook definitely is positive. However, with the pandemic still around, one does not know how things take a turn, said Ameya Joshi, Founder of aviation analysis website Network Thoughts.

According to him, one of the most keenly watched areas in the New Year will be aircraft orders by Indian carriers, especially by Air India.

The merged entity of Air India Express and AirAsia India is also expected to be a formidable challenge to the country's largest airline IndiGo, which had its share of issues related to engines as well as staff this year.

IndiGo, under the stewardship of new CEO Pieter Elbers, is also working on ambitious expansion plans and is also wet-leasing wide-body aircraft.

During 2022, SpiceJet grappled with multiple headwinds varying from safety concerns to financial woes to aircraft leasing issues, and lessors also took back some planes. The budget carrier, which has received funds under ECLGS, is working to raise funds and its plan to demerge the air cargo business will be completed in 2023.

Wadia Group-owned Go First, which has availed funds under ECLGS, will be looking to bolster its financials while experts opined that the airline's initial share sale is unlikely in the near future, considering the global headwinds.

SpiceJet and Go First have stiff competition now, with a resurgent Air India and Akasa Air, which launched its operations in August.

Jet Airways, which was supposed to restart operations this year, remains grounded amid differences between the lenders and the winning bidder Jalan Kalrock consortium. And a final picture about the once-storied carrier, which stopped flying in April 2019, is expected to emerge in 2023.

Earlier this month, the issue of congestion at airports, especially at Delhi airport, came to the fore amid domestic air traffic touching 2019 pre-pandemic levels. With authorities taking various measures, the situation has eased in the last few weeks.

On the airports side, efforts will continue for privatisation of more AAI-owned airports.

In a significant development, India is now among the top 50 countries with best aviation safety in the latest ICAO rankings and the major breakthrough will help domestic airlines in international expansion.

As per International Civil Aviation Organisation (ICAO) rankings , India is now at the 48th position, a "quantum leap" from the 102nd rank it had in 2018.

Earlier this month, global airlines' grouping IATA's chief Willie Walsh said India is seeing a much stronger recovery than the Asia-Pacific region in general and that the challenge will be in getting new aircraft and spare parts.

Around this time last year, regular international flights remained suspended. And this year, random COVID testing is in force for arriving international passengers as part of efforts to curb possible spread of infections amid a surge in cases in different parts of the world.

As authorities closely watch the current COVID situation, the aviation industry is hoping there is no 'deja vu'.