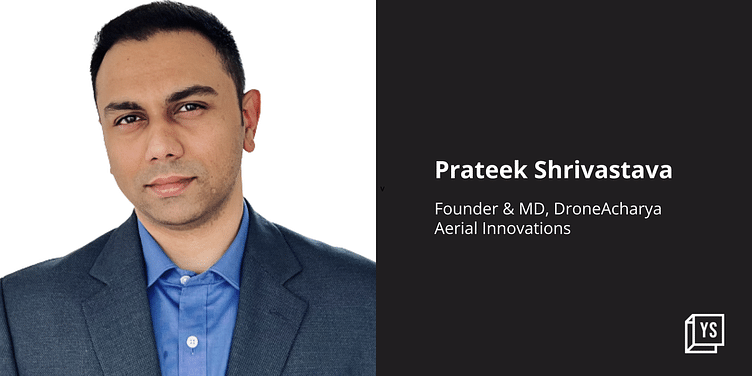 The company hopes to use the funds to buy and manufacture drones, sensors and processing infrastructure.

Drone startup ﻿DroneAcharya﻿ Aerial Innovations' initial public offering will open on December 13 and close on December 15. The shares of the Pune-headquartered company will be listed on the BSE SME Exchange.

The company said in a statement it will offer 62.90 lakh shares (Rs 10) through the book-building process, in the price band of Rs 52-54 per share. Of these, 8.98 lakh shares will be reserved for high net worth individuals, 11.94 lakh shares for qualified institutional buyers, and 20.92 lakh shares for retail investors.

The book-running lead manager for the issue is Corporate Capital Ventures. Bigshare Services is the registrar, while R. K. Stock Holding is the market maker.

The company expects to use the funds to purchase and manufacture drones, sensors, and processing infrastructure. It also plans to open 12 training centres by March 2023.

In the pre-IPO round of funding, market veteran Shankar Sharma and other market mavens and celebrities had picked up a minority stake in the company.

Commenting on his investment in the company, Shankar Sharma had said, "Drones are being widely used in the country, across industries for surveys, deliveries and surveillance, and this segment is expected to perform strongly in the coming years. We see a great value creation as the company has, within a very short span, been able to scale up its operations and has dynamic plans ahead."

According to the company, it has trained more than 180 drone pilots since March 2022. It has also launched courses on drones and geographic information systems to upskill young Indians.

The drone startup, founded by Prateek Shrivastava, plans to venture into manufacturing of customised, 100% indigenous drones and land and underwater surveying services.