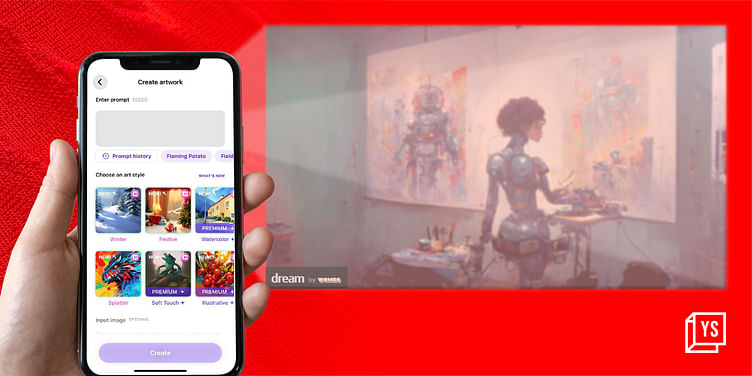 With all the furore surrounding generative AI, thanks to OpenAI, we decided to give Dream by WOMBO a spin. TLDR; don’t bother.

Can generative artificial intelligence usurp the role friends, mentors, and therapists play in our lives? Can AI-generated art and music stand up to human creativity? Will the next ‘Space Oddity’ be an AI composition?

Generative AI is scary and awesome in equal measure. OpenAI's recent developments with DALL-E and ChatGPT have stirred up quite a buzz. DALL-E, a tool for creating art based on natural language inputs, is upending the design industry, while ChatGPT has gained attention for effectively explaining complex technical concepts, as demonstrated by a Twitter engineer who used the tool to explain a code to Elon Musk, who notoriously struggles with the subject.

Dream by WOMBO Studios Inc is one such mobile app using generative AI. It works just like DALL-E, in that it generates artwork based on natural language inputs.

Featured on Google Play’s list of best apps in 2022, Dream has a 4.4-star rating out of 5, and 10 million downloads on the Play Store. It’s also available on Apple App Store.

After signing up, you land on the homepage that showcases a lot of user-generated content, including artwork designed by individuals, trending ‘styles’ of the artwork, and top compositions (which, on Dream, are called “memes” for some reason).

To start creating your own artwork, you have to click on the ‘plus’ sign which takes you to the composition page. You can add inputs about whatever you want designed in your natural language, after which the app asks you to pick an ‘art style’ such as cartoonist, realistic, retro-futurism, etc.

And voila! Dream generates your artwork for you.

On the free version, you get only one output (as in one painting). However, the premium version gives users access to more outputs.

Some ‘style’ options are ‘locked’ in the free version and you have to buy the paid version to access them—although you won’t miss too much if you continue using the former.

You can share your artwork on your Dream feed, which essentially takes on the form of an art-focused social media, or you can share it across your socials. The app also lets you upload a picture, input some prompts, and then create artwork out of it. You can tell the app how closely you want the final output to resemble the reference photo you’ve uploaded too.

That’s basically all you can do on the app.

At best, Dream is a fun platform to mess around on when you’re bored of scrolling through Instagram.

The outputs produced by the app for the prompts were disappointingly generic and lacked imagination. Despite my attempts to elicit more realistic artwork, much of what was generated appeared to be surrealistic in nature. At times, the artwork seemed so random and abstract that it was difficult to discern its intended subject matter.

When you draw a comparison between art generated by Dall-E and Dream, it’s easy to see which is the more intelligent AI software.

The prompt for the artwork below was ‘a ukiyo-e painting of a woman reading a book in space’. Here’s a side-by-side comparison between Dream’s rendition versus Dall-E’s output.

When browsing through the feeds of other users, it becomes apparent that much of the artwork is rather generic and unimpressive. Even when providing specific prompts—such as requesting a certain color shirt or texture of hair--these details often do not appear in the final output.

The hype surrounding Dream, as evidenced by its high ratings and inclusion on Google's list of best apps, is unwarranted when compared to the superior alternatives available on the market.

“Not sure why this is the best app of the year. It's boring and doesn't give results related to the prompts I put in. What's the point in wasting time with all of the settings that seem to have nothing to do with the final outcome? And they want you to upgrade to premium to see more random pictures. I don't see the point in this when many other apps do more interesting things with images,” writes another reviewer on the app’s Google Play Store listing page.

For me, this app was a no-go—try Dall-E, Nightcafe, or Jasper Art instead.