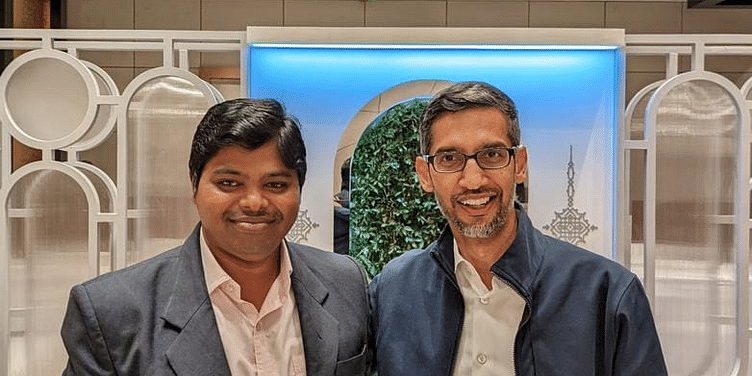 Selva Murali, an entrepreneur from Mathur town in Tami Nadu, runs the Agrisakthi app, which provides farmers in Tamil Nadu information on products, insurance, market price, and more. Read on to know why Google’s Sundar Pichai met him.

Selva Murali, an entrepreneur from a small town in Tamil Nadu, who runs an agricultural app, recently had the opportunity to interact with Sundar Pichai, CEO of Alphabet and its subsidiary Google, in Delhi.

Selva’s Agrisakthi app is an information dissemination platform designed for the welfare of farmers. He also owns a software company called Visual Media Technologies in Mathur town in Krishnagiri district.

How did Selva get to meet Sundar?

As part of the initiatives of Google’s Appscale Academy, in collaboration with Ministry of Electronics and Information Technology, Google had selected 100 app developers from across the country for a six-month training.

Selva was one of them, and he was chosen to interact with Sundar in Delhi. It was a surprise meet, says Selva, and he did not know he was meeting Sundar until he actually met him.

YourStory caught up with Selva for a quick chat.

An excited Selva says Sundar spoke to him in Tamil for over 15 minutes and recalls the conversation he had with Sundar—in which he gave the Google CEO an overview of Agrisakthi and demonstrated the features of his app.

Selva describes his meeting with Sundar as a “casual” interaction, minus any fanfare.

It is no wonder that Selva, who comes from an agricultural family, chose to create an app that would benefit farmers.

“I have turned the features offered by Google into application in the Tamil language,” he says.

For instance, the Agrisakthi app applies Google’s ‘Voice to Text’ feature in the Tamil language, for the benefit of farmers in the state.

The Agrisakthi app generates revenue through advertising, says Selva. He also says he is able to sustain the app through the revenue he makes from his software firm.

Does he plan to expand the app across the country?

“When Sundar suggested I expand it across the country, I told him that this would involve language translation and additional expenses. He told me I could look into the Google Translate facility to offer the app in various regional languages and also bring down the cost,” explains Selva, whose aim is to use technology for the welfare of people.