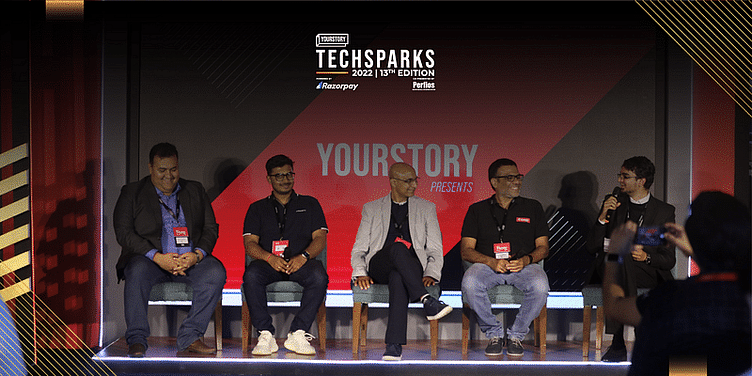 In a panel discussion themed ‘Playing to the fantasy: Rise of gaming & content in India’, panelists discussed the new-age tech aiding the growth of gametech in India.

Technology is seeping into every aspect of the world and online gaming is no stranger to it. Over the years, online gaming and esports have been through a lot of changes and today this industry is more advanced and progressive. Technology has enabled a variety of changes which is why online gaming continues to grow in popularity.

To discuss these new-age technologies in depth and how they are changing the gaming landscape, a panel discussion was held on ‘Playing to the fantasy: Rise of gaming & content in India’ at TechSparks 2022 featuring Gaurav Barman, Senior Business Development Manager, AWS; Vinayak Shrivastav Co-founder and CEO, ﻿VideoVerse﻿; Ranga Jagannath, Senior Director - Growth, Agora; and Ratheesh Mallaya, Director of Products, ﻿Zynga﻿.

Here are some of the key highlights from the discussion:

Tech enabling the growth of esports in India

The panel discussion started with understanding the rise of esports gaming in India. Despite being around for more than a decade, it’s only recently seen a boom in popularity. The current size of the Indian esports industry is Rs 250 crore and the forecast for the compound annual growth rate (CAGR) is expected to be 46 percent in the next four years. The esports industry is expected to see a growth of four-folds estimated to be Rs 1,100 crore by 2025.

Technology is a major propelling force that’s driving this rise. Gaurav of AWS shed more light by discussing a few of the technologies that AWS provides that help in building more interactive engagement for esports and gaming platforms.

“Esports companies in India can build engagement, which is much more interactive by offering players the ability to communicate with each other beyond linguistic or geographical boundaries. This can be done by providing multilingual, real-time, translation across geographies. Companies can also build real-time recommendation systems in terms of feed that the user sees,” said Gaurav.

Vinayak of VideoVerse spoke about how technology that aids in the production of short-form content is going to play a key role in driving the popularity of esports. “I think what's important for all of us to see is that e-gaming as an entire market is just continuously changing. It's going to continuously keep evolving over the next couple of years,” he said. In such a scenario, Vinayak believes that the services that VideoVerse provides with their flagship product Magnifi will play an important role in amplifying the entire ecosystem.

Magnifi uses state-of-the-art AI and ML technology to auto-produce key moments and highlights from live matches within seconds. Such kind of short-form content is what Vinayak feels is the need of the hour and will drive the growth of the esports market as well.

Hits and misses in the industry

The panelists further deliberated what has been working well for the gaming industry and what has tanked completely. Ranga of Agora spoke in detail about real-time engagement and how greatly it has benefited the gaming landscape.

While it’s important to know what is working for the esports landscape, it’s even more important to understand what’s not. Ratheesh shared some pearls of wisdom from some of the failures that Zynga has faced.

“When you're looking to build local, there is definitely a big opportunity out there. But that has to be on top of a really strong core that is fun and engaging for the users. We launched a game around the time of Independence Day in India based on a match game, but it did not turn out the way we wanted it to because of this reason,” he said.

Ratheesh highlighted that there is a great scope for games with Indian IP and in fact, according to a recent report, about 60 percent of the audience that doesn’t play games have said they will play if there is an Indian IP. But just building a game on something vernacular or Indian IP will not work out. He also pointed out how games that are currently top-grossing like Garena Free Fire, Coinmaster, and Candy Crush all have great visuals and quality and that’s what is enticing users to stay hooked on the game.

Talking about other hits, Gaurav emphasised how Web3 technologies and blockchain will hugely benefit the industry. Gaming companies are now looking at making digital assets interoperable and with the advent of the Metaverse, an entire make-believe world is possible where players can socialise, connect, and share content beyond the scope of gaming.

“From my perspective, technology is going to play a pivotal role in the evolution of this industry. Be it blockchain, NFT, or metaverse, all of that will come together as a platform where interoperability is enabled through underlying technology and used to build these solutions at this point in time,” he said.

Along with Web3 technologies, Vinayak shared how cloud-based video editing and streaming solutions will become pivotal for the overall growth of the ecosystem as they’ll make broadcasting, editing, and collaborating with peers in the industry much easier.

Microtransactions in the gaming industry

The panel ended by discussing microtransactions in the gaming industry where Ratheesh shared some useful insights on how transactions and in-app purchases have to be tailored according to the genre of the game. “There are different monetisation strategies like subscription-based model, battle pass kind of monetisation strategy or an impulse buy. Those are all options available to you. But what strategy you deploy depends completely on the genre of the game,” he shared. He also suggested that microtransactions on gaming apps must be personalised to the users' needs and that they must be pivotal in framing up the monetisation strategy for any gaming app.