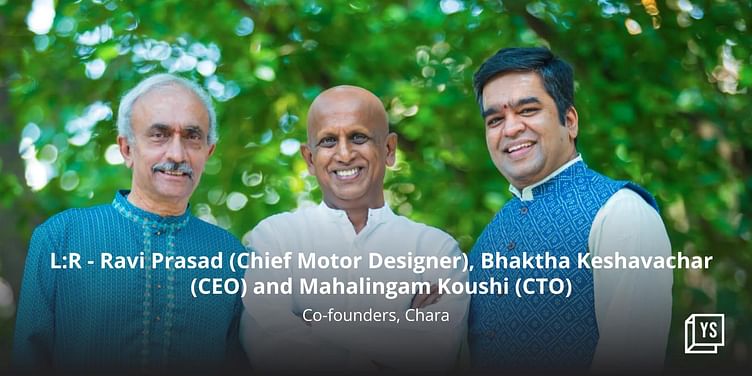 The company hopes to use the fund for team expansion, international business development, and initial investment for manufacturing and deployment of developed motors/controllers.

﻿Chara﻿, a deeptech startup, has raised $4.75 million in a pre-Series A round led by ﻿Exfinity Venture Partners﻿.

Vietnam-based Big Capital, the venture arm of Bitexco and Log9 Materials, and existing investors Kalaari Capital and ciie.co also participated in the round.

Earlier in 2021, the Bengaluru-based startup had raised a seed round of $850,000 led by ﻿Kalaari Capital﻿, with participation from ciie.co.

The company will use the fund for team expansion, international business development, and initial investment for manufacturing and deployment of developed motors/controllers, Bhaktha Keshavachar, Founder and CEO, Chara, told YourStory.

So far, Chara has built motors for two-wheelers (hub and mid-mount), three-wheelers, light commercial vehicles, and HVAC (heating, ventilation, and air conditioning) use cases. The motors and their matching controllers are being field-tested, and they are expected to go into production later this year. Chara also has projects to build motors and controllers for heavy commercial vehicles.

Chara is working on doing away with inefficient and rare-earth-dependent practices, said Bhaktha. The company, he said, is building rare-earth-free, hyper-efficient, cost-effective, intelligent motors and controllers for EVs, HVAC, and other industries.

"Exfinity strongly believes that the EV story for South Asia and similar markets has to be contextualised and not replicated from the US and European markets," said Chinnu Senthilkumar, Managing Partner, Exfinity.

"After our earlier investment in Log 9 Materials, Chara is part of our continued belief in this thesis. Chara delinks the permanent magnet supply chain dependency from China and other countries," he said.