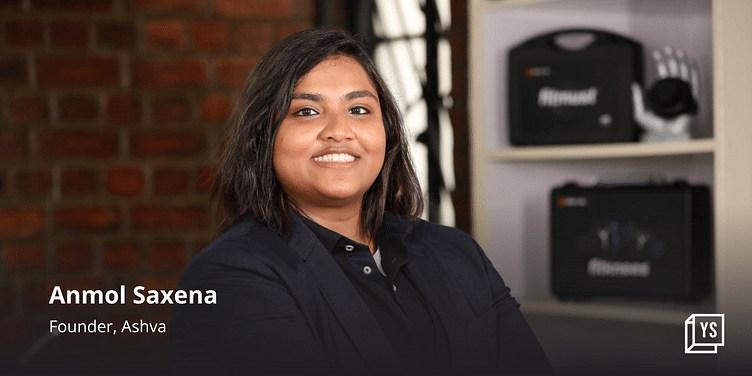 Founded in 2019 by Anmol Saxena, Ashva is a healthtech startup that aims to quantify knee assessments and track the efficacy of physiotherapy treatments using data. The startup is in the process of raising a new funding round.

Anybody who's ever been to the physiotherapist will tell you that, after that first-day shine wears off, physiotherapy often becomes a tedious endeavour, especially when you don’t see numbers on a test report telling you you’re gradually showing quantifiable and trackable improvements.

A lot of physiotherapies and joint rehabilitation currently rely on touch-and-feel, rather than being quantitatively measured like other health parameters, such as cholesterol or vitamin deficiencies, for example.

In a rapidly ageing country like India, the lack of quantitative tracking for muscle and joint-related injuries presents acute challenges, particularly when it comes to common and widespread diseases like osteoarthritis, which, even at moderate levels, can render an afflicted patient immobile and bedridden.

Considering the fact that the average age of most of India’s farmers—the sole breadwinners in a lot of households—is 57 to 61 years, a progressive osteoarthritis (OA) diagnosis is much like a death sentence not just for the farmer, but his dependents as well.

But when engineer and ex-Ford Motors employee Anmol Saxena started cogitating about osteoarthritis and the lack of any data-driven tests that could quantify the severity of the disease, she wasn’t thinking about India's ageing population or farmers. Her mother had been handed an osteoarthritis diagnosis, after years of dealing with inexorable knee pain, a steady decline in her mobility, and endless physiotherapy sessions that did not seem to bring any relief or move the needle on her suffering.

Anmol consulted with various physiotherapists and orthopaedic surgeons who directed her to hospitals equipped with gigantic machines worth over Rs 7 crore, spread throughout the country. These hospitals were the only ones able to offer a comprehensive evaluation of her mother's condition, but none contained all the necessary equipment for an osteoarthritis assessment.

On top of that, tests were costly and needed to be repeated regularly to monitor the progression of her mother's physiotherapy rehabilitation.

Running from pillar to post to get quantitative data around the progress of her mother’s rehabilitation made the engineer wonder if there was a way to make tracking this more accessible, decentralised, and affordable.

Wanting to make life a little easier for her mother, Anmol decided to build an all-in-one wearable device that could perform the task of seven big knee assessment machines, and founded ﻿Ashva Wear Tech﻿, a Bengaluru-headquartered healthtech startup, in 2019.

“When you go to a doctor with knee complaints today, he will typically ask you to lay down on the bed and bend your knees, sit up and push your shin against his hands to test your muscle strength, etc.— basically very subjective tests."

“Two big problems of this method of assessment are that it is very dependent on the expertise level of the doctor…and then how do you quantifiably test the progress or effectiveness of the treatment plan. There’s no standardised test to approach this problem through data, like an ECG for a heart condition,” Anmol says.

“We want to define and set the gold standard for knee assessment in India,” she adds.

While Ashva does not directly compete with anyone in the Indian startup ecosystem on its tech, save for the cluster of gigantic, heavy assessment machines that cost upwards of Rs 7 crore, its international wearable counterparts include California-based Vayu Technologies, Poland-based AISENS, and VALD Performance.

The two devices, used in conjunction, can quantitatively monitor the progress of physiotherapy sessions and objectively demonstrate whether the prescribed exercises are improving the patient's condition.

"Our device can help a patient understand if they can manage their knee problem through conservative treatment plans such as physiotherapy, or if they need to go in for a knee-replacement surgery,” Anmol tells YourStory.

“It’s like a blood test for your knees—we can help you decide if you need that knee surgery,” she adds.

Ashva’s Fitknees and Fitmust are currently used in more than 50 physiotherapy centres across Bengaluru by clinics serving senior citizens, as well as sportspersons like Saina Nehwal and Leander Paes.

The company conducted research and development for two years, during which time it obtained five patents. It officially launched the device in 2022, after a year of clinical testing at St John’s Hospital in Bengaluru.

Ashva has produced over 1,500 assessment reports to date. Nearly 45% of the patients at various stages of their treatment cycles have undergone Fitknees assessments multiple times.

“A Fitknees test is typically completed in 20-30 minutes and measures a variety of parameters such as range of motion, muscle strength, balance, gait pattern and risk-of-falling, among other things,” Anmol says.

Just a short 30-kilometre journey outside the bustling city of Bengaluru reveals a landscape dotted with farmers in various states of painstaking work. As sole providers for their households, Indian farmers have little chance of rest or respite.

The harsh reality of ageing is that it often brings with it osteoarthritis—the most common age-related problem. But prevention is cheaper and less risky than surgical intervention, which is often out of reach for the quintessential Indian farmer.

Ashva has been partnering with several rural hospitals around Bengaluru to provide knee assessments to farmers at highly subsidised rates.

“Our aim is to educate farmers about their knee problems during the early stages of arthritis so they can seek timely physiotherapy intervention, instead of letting it worsen to the point of a physical disability that necessitates expensive and often out-of-reach surgeries,” Anmol says.

“Farmers are the backbones of our country, and Ashva wants to take care of their bones,” she quips.

Ashva is currently expanding Fitknees' testing capabilities to include assessments for athletes returning to the field after serious injuries, prediction and prevention of future injuries, and providing running analytics.

In the future, the startup hopes to standardise testing and make physiotherapy benefits available to Indian athletes who do not have access to clinicians who can focus on their sports-specific musculoskeletal development.

The startup aims to establish a presence in 150 clinics and hospitals in Bengaluru, Hyderabad, and Mumbai by the end of the 2023 fiscal year. It is currently in the process of raising another funding round.

India, which has a rapidly ageing population, is projected to have the highest number of osteoarthritis patients by 2050, and may become the global centre for joint and muscle-related health issues, a WHO report said.

As per the company’s independent estimate, the market for wearable testing and assessment devices for knee issues is $25 billion in India alone and is expected to keep increasing every year as more people adopt biotechnology and smart devices.