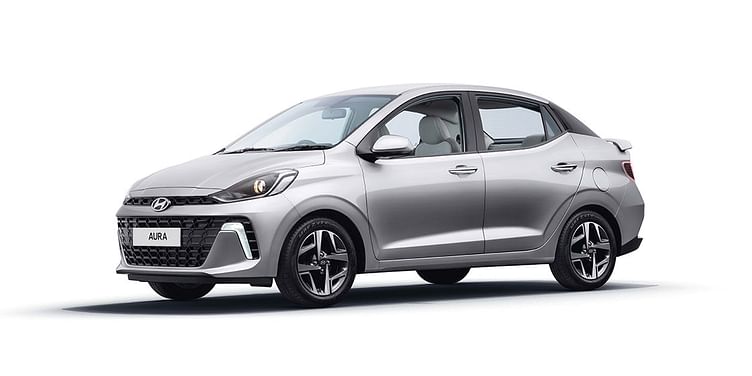 The facelifted Hyundai Amaze is available in four variants including E, S, SX, and SX(O).

Hyundai has launched a mid-cycle facelift to Aura at a starting price of Rs 6.30 lakh and going up to Rs 8.88 lakh (both ex-showroom).

The sub-compact sedan now dons an updated exterior styling to go with additional features and safety equipment. Bookings for the new Aura opened earlier this month for a token amount of Rs 11,000.

In its latest avatar, Aura gets a refreshed exterior styling with a redesigned front fascia. It gets a more upright nose featuring a new low-positioned, two-part grille with a 3D mesh pattern integrated onto the front bumper. The reprofiled front bumper houses new inverted L-shaped LED DRLs at the edges.

The layout inside the cabin of the facelifted Aura remains the same with a similar dual-tone theme. However, it gains a new light grey seat upholstery, new lighting for the footwell area, and a revised instrument cluster with a 3.5-inch multi-information display (MID).

Under the hood, Aura retains the same 1.2-litre Kappa naturally aspirated petrol engine that churns out 82 bhp and 114 Nm of peak torque. This motor is mated to either a five-speed manual gearbox or an AMT unit. The same mill is also offered in a CNG guise that kicks out 68 bhp and 95 Nm of torque and is exclusively paired with the five-speed manual gearbox.

The AMT gearbox is also limited to the S variant only. The Korean carmaker has removed the 1.0-litre GDi turbocharged petrol engine from the Aura lineup owing to its poor demand. Aura continues to rival sub-4 metre sedans like Maruti Suzuki Dzire, Tata Tigor, and Honda Amaze.