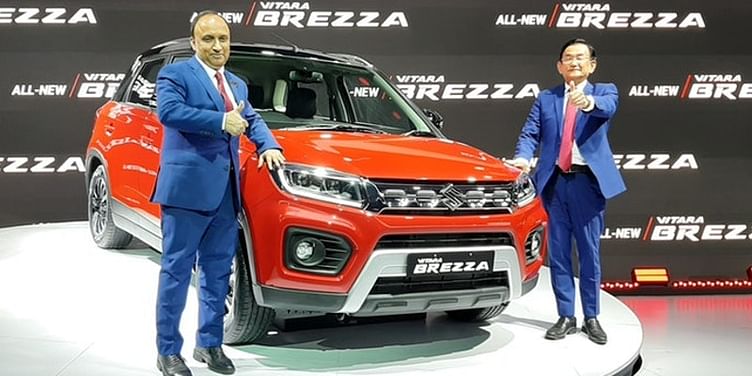 At Auto Expo 2020, underway in Delhi, Maruti Suzuki unveiled the Vitara Brezza, finally with a petrol engine to take it into the BS-VI era.

The company decided to stop the production of diesel cars in the BS-VI era. Thus, the Brezza needed to be upgraded to a petrol powertrain as it was a diesel-only car until now.

The Brezza will now come with the 1.5-litre, four-cylinder K15B petrol engine, similar to the S-Cross, Ciaz, Ertiga, and XL6. It will also have the same five-speed manual and an automatic gearbox. The new Brezza engine will provide 106 PS of power and 138 Nm of torque. Maruti has decided to sell the smart hybrid SHVS system only with the automatic transmission variant.

The rules allow only a car smaller than four meters and with an engine capacity of less than 1,200cc to get favourable tax breaks. Maruti will struggle with the pricing of the car as it falls foul of the regulation with a 1,400cc engine.

The S-Cross has also been updated at the Auto Expo 2020, and new units should be in NEXA outlets by March 2020. But unlike the S-Cross, the Brezza is getting cosmetic upgrades.

Even on the rear, the Brezza has new LED tail lights and 16-inch dual-tone diamond cut alloy wheels finish the exterior package. Besides that, the compact SUV gains hill hold assist.

On the interior, the car has an all-black cabin with a 7.0-inch touchscreen SmartPlay Studio infotainment system. This system supports Android Auto and Apple CarPlay voice commands. It is coupled with cruise control, automatic wipers, and automatic headlamps, amongst other features. In terms of safety, the car has dual airbags and ABS.

Maruti has started accepting orders for the new Brezza. Prices of the new car shall be announced at the end of this month or at the start of March.