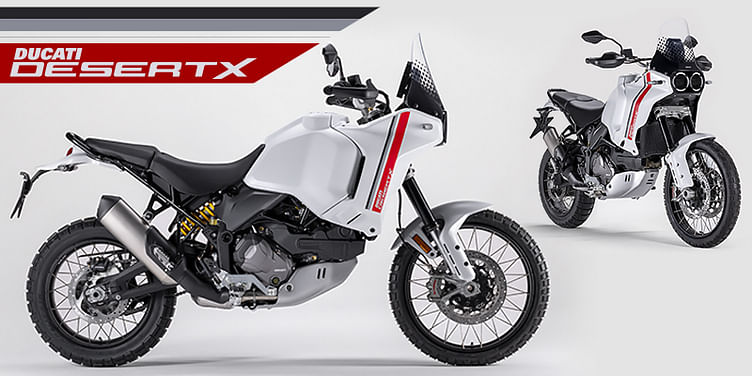 The new Ducati DesertX is specifically meant to tackle dirt tracks, unlike its cousin Multistrada V2, which is a more seasoned all-rounder.

Bookings are already open across Ducati dealerships in the country and deliveries are expected to commence from the first week of January.

The DesertX goes up against the likes of hardcore adventure motorcycles such as Triumph Tiger 900 Rally, BMW F 850 GS, and Honda Africa Twin.

The design of DesertX is a modern interpretation on the lines of enduro motorcycles from the 1980s, created by the Centro Stile Ducati. It features twin round LED headlamps, with circular daytime LEDs inspired by the Cagiva Elefant of the ‘90s, along with a high-wind deflector up front.

The motorcycle rides on 21-inch front and 18-inch rear wire-spoke wheels, providing a more classic look. It is wrapped around a white paint scheme with two strips in red and black, depicting the brand and model names, respectively.

Other than its sleek profile, the DesertX commands a tall stance with an 875mm saddle height, which can be reduced to 865mm using an accessory low seat.

Other features on offer include six riding modes–Sport, Touring, Wet, Urban, Enduro and Rally; four power modes–Full, High, Medium and Low; two info modes–Standard and Rally; and optional turn-by-turn navigation. There are other optional extras to choose from such as fog lamps, heated grips, aluminium panniers and an 8-litre auxiliary fuel tank in addition to the standard 21-litre tank.

Ducati DesertX is built on a traditional trellis frame structure which is suspended on 46mm upside-down forks at the front and a rear mono-shock attached to the swingarm with suspension travel of 230mm and 220mm, respectively. Aiding its off-roading prowess is an exceptional 250mm ground clearance.

Braking duties are handled by twin 320mm discs held by Brembo-M50 Monobloc four-piston callipers at the front and a 265mm single disc held by a dual-piston floating calliper at the rear.

Powering DesertX is a familiar 937cc Testastretta L-twin 11-degree water-cooled engine that performs duties on multiple Ducati models. This motor churns out 110 hp at 9,250 rpm and a peak torque of 92 Nm at 6,500 rpm while being mated to a six-speed gearbox. The gearbox has been updated with different ratios as compared to the one offered in Multistrada V2 and comes with a bi-directional quick-shifter as standard.