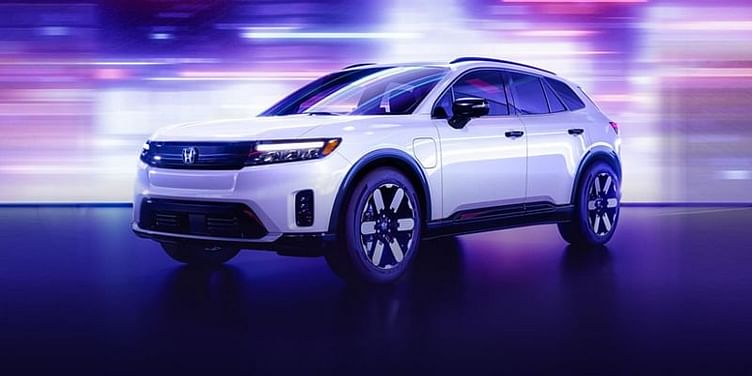 Honda is aiming to strengthen its electric vehicle (EV) portfolio in the next few years with a slew of new launches. The Japanese carmaker has already forayed into the battery-powered space with Honda E electric car which will be the brand’s entry-level model in this segment.

The company has now taken the covers off its first fully electric SUV, catering to a more premium space. Named Prologue, this SUV has been co-developed by Honda in partnership with General Motors (GM). It is expected to go on sale in North America in 2024.

The new electric SUV is based on GM’s Ultium platform that underpins EVs like Cadillac Lyriq, Chevrolet Blazer and the all-electric GMC Hummer. Prologue is part of Honda’s aggressive electrification plans which includes the launch of 30 EVs by 2030. Honda intends to phase out diesel cars by 2025 and petrol cars by 2030 in major international markets.

Honda describes Prologue as a ‘neo-rugged’ SUV with utilitarian attributes blended with modern touches. Measuring 4876.8 mm in length, 1988.82 mm in width and 1643.38 mm in height, Prologue has a wheelbase that is 203mm longer and 127mm wider than the new-gen CR-V.

Keeping the North American audience as the target customers, the SUV has been designed at the Honda Design Studio in Los Angeles. Its front end is inspired by the Honda E electric city car since it features a large black panel on its nose. The faux grille is flanked by sleek LED headlamp clusters with horizontally-mounted LED DRLs integrated on top.

Side profile of Prologue flaunts trademark SUV styling elements with thick body claddings around wheel arches and door sills. The electric SUV stands on 21-inch dual-tone alloy wheels. Door panels have a clean and understated look with minimalist body creases. At rear, the wraparound LED taillamps are connected to each other via a black bar, featuring “Honda” lettering at the centre instead of its logo.

Inside the cabin, one is greeted with an exclusive charcoal and light grey theme. The interiors are minimalist yet modern, offering features like an 11-inch fully digital instrument console and an 11.3-inch free-standing touchscreen infotainment display. Honda has made use of rotary knobs and physical buttons on the dashboard to give it a tactile feel.

This Citroen concept EV is made of reusable cardboard

The electric SUV is also expected to be heavily loaded on the safety front with features like autonomous emergency braking, front pedestrian braking, lane keep assist with lane departure warning, forward collision alert and auto high beams likely to be part of the package.

Honda is yet to reveal details regarding its powertrain but certain reports suggest that Prologue could get the same specifications as Chevrolet Blazer EV. This means it could boast a range of around 510 km on a single charge and a maximum charging rate of up to 190 kW. The company has confirmed that the SUV will be offered with all-wheel-drive configurations.