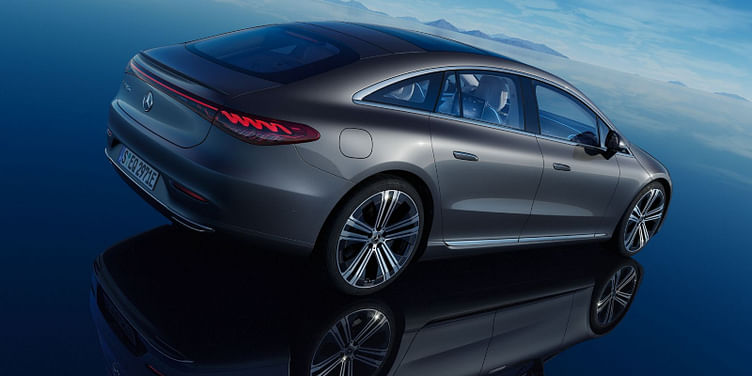 EQS 580 4MATIC is the first fully-electric car from Mercedes Benz to be locally assembled in India.

﻿Mercedes-Benz﻿ has rolled out the all-electric EQS 580 4MATIC in India for Rs 1.55 crore (ex-showroom). The price sits around Rs 90 lakh below the recently launched AMG EQS 53S since the latter is a fully imported model brought to the country via the completely built-up unit (CBU) route.

Interestingly, it is also cheaper than its ICE-powered cousin—S-Class—by Rs 5 lakh, thanks to a lower GST rate for fully-electric vehicles. The price gap increases further on the account of exemption of road tax for EVs in many states. EQS 580 is the third fully-electric model by the German marque in India after the EQC SUV and AMG EQS 53S.

It is also the first battery-powered model from Mercedes to be locally assembled in India via completely knocked down (CKD) kits at the company’s Chakan-based facility near Pune, Maharashtra. In fact, India is the only country outside Germany where the EQS is assembled.

The design of EQS 580 4MATIC is mellowed down in comparison to its aggressive-looking sibling from the AMG division. It is underpinned by the dedicated Electric Vehicle Architecture (EVA2) and sports a cab-forward design with a long and heavily curved roofline, called “one bow”.

Up front, the electric saloon gets a sealed-off grille panel featuring numerous illuminated three-pointed stars. The front face is highlighted by a pair of dual-projector LED headlamps headlined by a connected LED DRL running across the width of the nose. The front and rear bumpers have been reprofiled and are less angular compared to its AMG sibling.

EQS 580 rides on smaller 20-inch wheels with a five-spoke design. Thanks to its coupe-style design, it boasts a lower drag coefficient of 0.20 compared to 0.23 offered by AMG EQS 53, making the former the world's most aerodynamic production car. Mercedes is offering EQS 580 in five exterior colour schemes.

The coupe-like roofline culminates at a notchback-style boot lid featuring 3D helix taillights with a light strip. Measuring 5,126mm in length, EQS 580 4Matic is slightly shorter than S-Class although both models share an identical wheelbase of 3,210mm. It comes with a boot capacity of 610 litres, while the car tips the weighing scale at 2585 kg.

The centre display is a 17.7-inch touchscreen infotainment screen whereas the driver and front passenger get 12.3-inch screens each. Each of these screens gets 12 actuators beneath the glass panel to provide haptic feedback to the users. Being an electric derivative of S-Class, EQS is loaded to the gills when it comes to features.

Its safety arsenal is loaded with features like nine airbags, active steering assist, lane keeping assist, a driver assistance package, lane change assist, an emergency stop system, 360-degree camera view with Parktronic, etc. EQS 580 comes equipped with rear-wheel steering, however, it will be offered only for the first 500 customers.

Powering EQS 580 4Matic are two permanently synchronous electric motors, one mounted on each axle sending power to all four wheels. The motors derive energy from a 107.8 kWh battery pack and dish out a combined peak output of 516 bhp and 855 Nm. The luxury electric sedan delivers a claimed ARAI range of 857 km on a single charge.

As for performance, EQS 580 can do a 0-100 kmph sprint in just 4.3 seconds whereas top speed has been capped at 210 kmph. The car comes with multiple charging options, the highest being a 200kW DC fast charger that can rejuvenate the battery pack from 10% to 80% in 31 minutes.